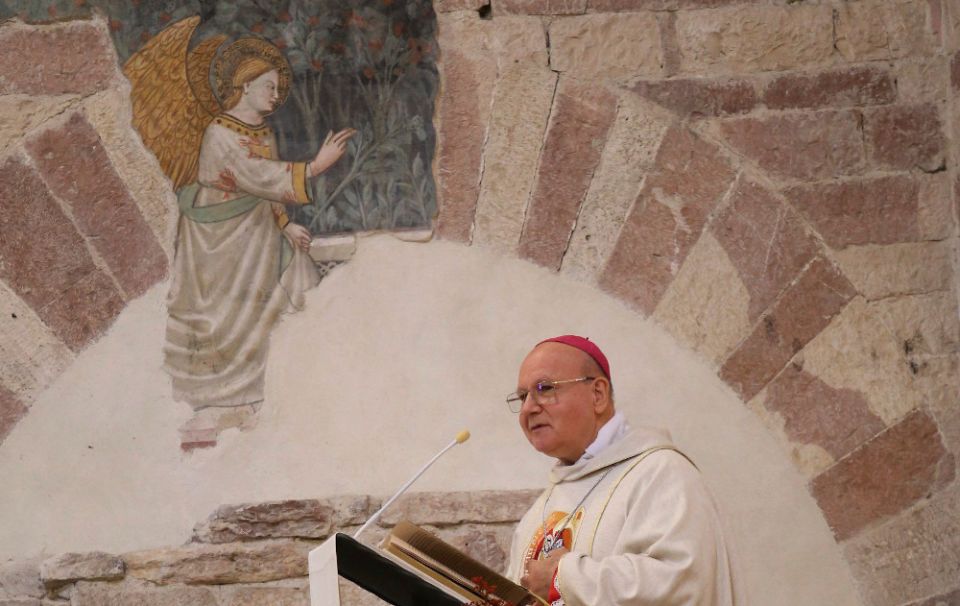 Assisi, Italy — Giving thanks that the Treaty on the Prohibition of Nuclear Weapons came into force Jan. 22, the archbishop of Assisi insisted that ensuring peace for humanity would require further steps, including working for justice and removing threats to human life at all stages of its development.

Dozens of other Catholic leaders worldwide, including 29 bishops, also welcomed the treaty, saying in a statement released Jan. 22 by Pax Christi International, "the worst of all weapons of mass destruction" are immoral.

"In Assisi, city of peace, we rejoice for the notable step toward world peace made today with the coming into force of the Treaty on the Prohibition of Nuclear Weapons," Archbishop Domenico Sorrentino of Assisi said in a statement issued the day the treaty came into force.

"Today's step, which targets one of the most terrible weapons of destruction that the human mind has conceived, should be greeted with joy," he wrote. "Let us give thanks to the Lord and make a commitment, in the footsteps of the Gospel and the testimony of St. Francis of Assisi, to become more and more witnesses and builders of peace."

The treaty makes it illegal under international law to develop, manufacture, transfer, possess, use or threaten to use nuclear weapons. None of the nations that possess nuclear weapons ratified it, however.

For there to be true peace, Sorrentino said, the world must "eliminate not only nuclear weapons, but all weapons of destruction and, in fact, every threat to life in all its phases and expressions."

"Aggressive attitudes must give way. A geopolitical policy of solidarity, not dominion, is necessary," the archbishop said.

Calling on everyone to work for justice and embrace nonviolence, Sorrentino said people must recognize "the dignity of every human person, every people, culture and religion."

"In summary," he said, "peace is not only the absence of war, but must be constructed in its spiritual, familial, social, economic and political entirety."

Among those signing the Pax Christi statement were Archbishop Pierbattista Pizzaballa, Latin patriarch of Jerusalem, and Archbishop Joseph Mitsuaki Takami of Nagasaki, Japan, president of the Japanese bishops' conference.

The statement recognized the Vatican's leadership in calling for nuclear disarmament and noted that it was among the first states to join the accord.

"We are concerned by the continued risk to humanity that nuclear weapons could be used and by the resultant catastrophic humanitarian consequences. It is heartening that this new treaty is based on a growing body of research about the catastrophic humanitarian and ecological consequences of nuclear attacks, tests and accidents," the statement said.

The Catholic faith "invites us to seek the common and universal good," it added. It also quoted Pope Francis' most recent encyclical, "Fratelli Tutti, on Fraternity and Social Friendship" in asking, "Is it possible for us to be open to our neighbors within a family of nations?"

The signatories invited other Catholic leaders to "discuss and deliberate" about the role the church can play in building support for "this new international norm against nuclear weapons." In addition, it urged Catholic institutions and bishops' conferences to review whether church funds are invested in corporations and banks involved in the production of nuclear weapons and, if so, to "look for ways to divest."

In Italian sex scandal, Vatican caught in a bind