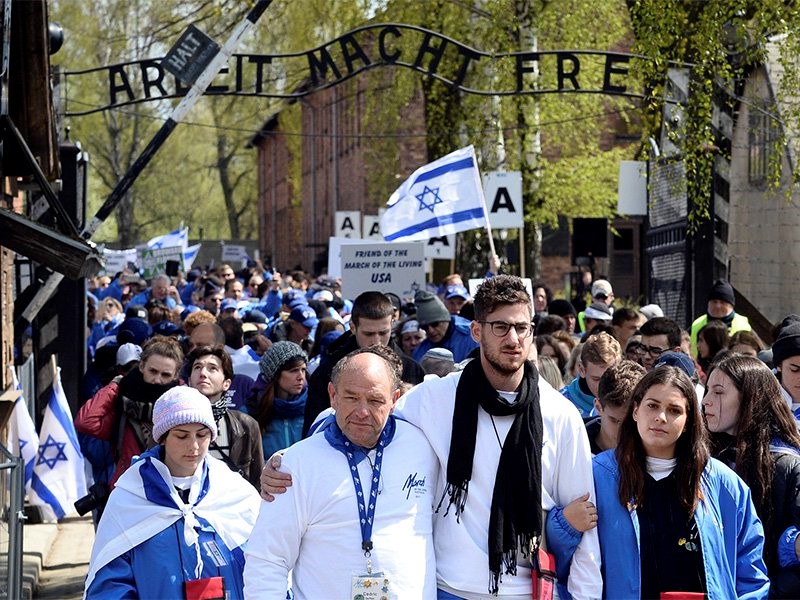 Participants in the annual International March of the Living walk through the "Arbeit Macht Frei" (work sets you free) entrance gate in the former German Nazi death camp Auschwitz-Birkenau, in Oswiecim, Poland, on April 24, 2017. Jews from Israel and around the world marched the 3km route from Auschwitz to Birkenau in memory of Holocaust victims. (AP/Alik Keplicz)

For the International March of the Living this week, more than 12,000 Jews and non-Jews from nearly 50 countries will travel to Auschwitz to commemorate the 6 million Jews murdered during the Holocaust.

But swirling around the annual march this year are questions about Poles’ willingness to grapple with some of their forebears’ participation in the Holocaust: The Polish Senate passed a law in February that makes it a crime to accuse the state or its citizens of complicity with the Nazis.

Despite qualms from Jewish leaders that Poland has made it illegal to discuss the darkest chapter of its history with the Jews, the march Thursday, April 12, goes on.

The marchers — mostly teens and young adults but also diplomats, heads of state and synagogue groups — will mark Israeli Holocaust Remembrance Day by walking from the Auschwitz death camp to Birkenau, a camp within Auschwitz.

After a week in Poland, where they have been visiting sites such as the Warsaw Ghetto, viewing once-vibrant synagogues and speaking with Holocaust survivors, most will fly to Israel in time to celebrate the 70th anniversary of the country’s founding, which begins at sundown on April 18.

Given the new law, some Jewish leaders are asking whether Jews should be visiting Poland and supporting its economy if the government is eager to erase the fact that many Poles did in fact support the Nazis. Jews and other victims of the Holocaust note that thousands of individual Poles carried out wartime atrocities against Jews, Roma, gay people and others.

The Polish Senate passed the law to underscore that Poland was under a brutal German occupation during World War II and that it was the Nazis and not the Poles who built concentration camps such as Auschwitz.

The day after the law’s passage, Rabbi Moshe Azman, chief rabbi of Ukraine, urged Israel’s education minister to send thousands of Israeli high school students on Holocaust trips to Ukraine rather than Poland.

Doing so, Azman said, would constitute “a fine” on Poland, where Holocaust-related visits and Jewish-roots tourism are big business.

Rabbi Abraham Cooper, associate dean and head of global social action for the Simon Wiesenthal Center, said the center “is closely monitoring” the situation in Poland.

“If the situation deteriorates significantly — if there is an increase in hate crimes against Jews, or if respected historians are indicted under the new law, we will call on world Jewry to restrict their travel” to commemorative visits and refrain from other visits.

Cooper acknowledged that the Polish people “suffered terribly under the Nazis,” but he said that before, during and after the Holocaust “there were Poles who not only discriminated against Jews but attacked and killed them. That’s the part of Polish history the current government doesn’t want people to know about.”

David Silberklang, senior historian in Yad Vashem’s International Institute for Holocaust Research, warned that the law, which is being reviewed by the Polish constitutional court, “will intimidate” scholars, educators and others “from having an open discussion of the roles of Polish people in the Holocaust.”

If people are harassed and sense that their careers are threatened, or say or write things of which the government does not approve, “then they may ultimately avoid the topic,” Silberklang said.

Danny Danon, Israel’s ambassador to the United Nations, said he will be leading a delegation of U.N. ambassadors on the March of the Living and then to Israel.

Once the ambassadors see the crematoria at Auschwitz and speak to Holocaust survivors, “they will realize that you cannot make comparisons” between Israel’s policies toward the Palestinians and the Holocaust, Danon said, referring to remarks by some governments hostile to Israel.

Shmuel Rosenman, co-founder of March of the Living, said the daylong ceremony at Auschwitz is just one component of the trip.

“We do these trips in order to transmit the memories and lessons from the Holocaust to the next generations. There were 1,000 years of Jewish life and 3 million Jews here” before the Holocaust.

With so few Holocaust survivors left who can make the journey to Poland, Rosenman said, every minute with them is precious. “If we don’t go, we will miss one of the strongest experiences that can touch a person,” he said.

While the vast majority of the march’s 300,000 participants over the past 30 years were Jewish, roughly one-third of this year’s marchers are non-Jews.

“They come from all over Europe, and their experience being around Jewish kids is important on an interpersonal level, but it also gives a strong message at a time when anti-Semitism in Europe is rising,” Rosenman said.

“These young adults carry their experience back to their communities, their cities and their countries. They become ambassadors.”