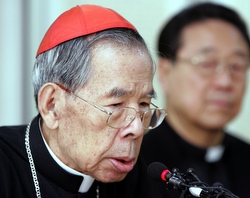 Remembrance
Despite chilly weather, some 10,000 Mass people attended the funeral mass at Myeongdong Cathedral Friday. Most had to gather outside the church where large screens showed the liturgy. All national TV stations telecast the one-and-a-half-hour service.

Since Cardinal Stephen Kim Sou-hwan died Feb. 16 at the age of 86 more than 400,000 people have come to pay their last respects.

ardinal Kim, the John XXIII of Asia, had a forward-looking vision matched only by his humility and commitments to democracy, human rights and the poor.

He was an advocate of the local church and will be remembered as the person who gave life and form to the Federation of Asian Bishops’ Conference, which has been the mind and soul of Asian Catholicism for nearly four decades.

Pope Paul VI named Kim Seoul metropolitan in 1968. The following year the pope made him the first Korean cardinal as well as the youngest cardinal in the world at that time, at the age of 46.

Kim quickly became a defender of human rights as he protested the Korean military dictatorships of the 1970s and 1980s. At that time Seoul's downtown Cathedral became a haven for protesters fleeing military clubs and arrests.

In January 2001 I traveled with my wife to Seoul to meet Kim who had retired two years earlier as the leader of the South Korean church.

It was on a bitter cold morning that we sat down with him in his office on the campus of Seoul’s Catholic University. With winds rattling the windows and temperatures below zero, his office was chilly and he quickly offered us hot green tea.

The cardinal was characteristically cordial. He told me he was familiar with the National Catholic Reporter and asked us about our family. In Asia, family talk precedes business.

Soon I asked the cardinal if he would share with me some of his most valued memories. He spoke first about standing up against the dictatorships.

“Those were tough years,” he said in English.

“And lonely years?” I asked.

“Yes, sometimes our bishops did not always agree on the statements we needed to make.”

There were divisions within the ranks of the Korean bishops at that time, he said. Not so much about the nature of the regimes, but as to how to respond to their widespread rights violations. Some bishops wanted to stay relatively quiet and work from the inside. Kim thought otherwise. He felt compelled to speak out, to be a voice for the people, he said. As archbishop of Seoul, he was at times in a lonely place as he stood – sometimes all alone - against the generals.

During that time he opened the Seoul cathedral, offering it as a place for political sanctuary. In the process he extended his Episcopal cloak of protection to tens of thousands of students, workers and political dissidents.

In 1975, in one memorable cathedral confrontation, police arrested opposition leader (and later Korean president and Nobel Peace Prize laureate), Kim Dae Jung, and two dozen other protesters as Kim led 2,000 supporters in a prayer service. A decade later, one of South Korea’s largest newspapers, Dong-a Ilbo, expressing gratitude for the nation, naming Kim “Man of the Year.” Said the paper: “His vision of democracy – his vision that people be respected, his going out to seek the marginalized and the oppressed, to be with them, to comfort and pray with them – is the reason we have chosen Kim Sou Hwan man of the year.”

Then the cardinal began to talk about the early days when Korean pride and belief in the needs and opportunities of local culture moved him to contemplate beginning an Asian bishops’ conference.

Looking back over the decades, he chuckled and said that it was nothing short of a miracle that the Asian bishops’ organization he dreamed up, one dedicated to enhancing local culture and working with the poor, ever got off the ground. Distrust in Rome almost did it in, he told me.

Kim spoke about an important gathering of the presidents of eleven Asian bishops’ conferences some four months after Pope Paul VI’s visit to Manila in 1970. The bishops were in Hong Kong to nourish the idea of forming an umbrella organization to unite all the bishops of Asia. Specifically they wanted to draw up statutes so they could present them in Rome. However, once in Hong Kong, Cardinal Edward Cassidy, the Vatican diplomat of Taipei, Taiwan at the time, gave the Asian bishops some unexpected and shocking news.

He told them that key members of the Roman Curia were so opposed to the idea of the proposed organization they wanted all work on it to stop immediately.

“Cassidy told us that there was nothing that could be done. The only thing left (for us) to do was to go shopping -- or leave Hong Kong right away.” “We were shocked,” Kim continued, adding he was equally determined to stay the course. I asked Cassidy to imagine the reaction of the mass media when word got out that Rome had canceled the meeting of the Asian bishops, Kim said. “They knew we were in Hong Kong to discuss the organization,” he went on. “If we stopped it would be very negative. It would be very bad publicity for the Roman church.”

Cassidy listened and pondered Kim’s remarks - and eventually agreed with him. He had been won over and, in fact, went on to say he would personally take responsibility for the continuing of the bishops’ meeting, Kim told me.

With Cassidy’s new reassurance the bishops began their work. First they formed an organizational working committee that would draft statutes. The group named Kim committee president.

By the end of April 1971 the committee completed a first draft of the statutes. Later, after receiving feedback and suggestions from the Asian episcopal conferences, the group sketched out several revisions. By November 1971, it wrote a proposed constitution and again distributed papers to the various national conferences. The statutes, reflecting the wider Asian conferences’ sentiments, were well received. The only reservation at the time was that some bishops wanted assurances that membership in the new organization would be strictly voluntary.

By the end of August 1972, less than two years after Manila, the presidents of twelve bishops’ conferences had given their approval and it was decided that the four Asian cardinals – Valerian Gracias of Bombay, Thomas Cooray of Colombo, Darmojuwono and Kim – would go to Rome to present the approved constitution to Pope Paul.

“The pope was supportive,” Kim recalled. However, not everyone in the Vatican was so pleased. “By then CELAM (the Latin American Bishops' Conference) had been established (in 1955) and some in Rome did not accept it,” said Kim. “They did not want another CELAM. It was a matter of control. Rome didn’t want to lose control.”

There was another sticking point. The Vatican, Kim said, did not want the proposed bishops’ organization to have, in church parlance, “binding authority.” Rome did not want the bishops involved in strict moral or doctrinal matters. “We assured the pope,” Kim said. “What we envisioned was an organization that was pastoral in nature, an advisory body aimed at facilitating communication.”

Kim also told the pope the new body would work for social justice and human development; that it would promote and defend the greater good of Asia. Implicit in Kim’s description to the pope was an idea close to the pontiff’s heart – an organization committed to practicing collegiality, putting the ideals of the council to work. The new group would help forge a Vatican II vision of church.

Ironically, the fact that the nascent organization did not, in the final analysis, end up with the official authority Rome had feared turned out to be a real plus. Some in Rome clearly feared a countervailing Asian authority, another power center. The truth is that the Asian bishops were not really seeking “power” as much as they were seeking better communication. They were looking down a pastoral path.

As it turned out, by not having “binding authority,” the Asian bishops, not burdened with the weight of such authority, were able to act much more freely - and agree more quickly - to the many statements they were to issue in the years that followed. For the Asian bishops the important issues, it turned out, would be pastoral in nature, not doctrinal. They would deal with mission, spirituality, dialogue with other religions, peace and justice issues. They would have to do with charting the direction of the church in Asia.

In the years that passed the Asian episcopal vision took form. Explained Kim: “Because there was no binding authority there was more freedom and more willingness to act in a cooperative spirit.” It was in this spirit of cooperation and freedom – beneath Vatican radar – that the Asian vision of church took hold.

In November 1972 Pope Paul gave his final approval to the proposed statues - for a two-year experimental period. At the end of two years, however, the question of whether to continue or not was moot. The conference had taken off.

The Federation of Asian Bishops’ Conferences, or FABC, as it began to be called, was now taking shape to include bishops’ conferences in South, Southeast and East Asia including the bishops of Bangladesh, Taiwan, India-Nepal, Indonesia, Japan, Korea, Laos-Cambodia, Malaysia-Singapore-Brunei, Myanmar, Pakistan, the Philippines, Sri Lanka, Thailand and Vietnam.

With the Vatican approval in hand, the Asian bishops quickened their pace. On Feb. 13, 1973, presidents of 10 Asian bishops’ conferences met again in Hong Kong. This time they worked out FABC’s formal structures.

In one of the most formative statements ever written by the Asian bishops, they answered emphatically: We enhance life and build community – we become church - by entering into dialogue with local cultures, local religions and local peoples.

The leadership of the FABC would continue to uphold these goals, despite considerable challenges and opposition, for at least the next three decades. The vision statement that came out of Taiwan has set the direction for the FABC and through it, the local Asian churches, into the twenty-first century.

Tom Fox is NCR Editor and author of Pentecost in Asia, a book about the birth and growth of the FABC.

Shanghai's Bishop Jin, who worked to rebuild church, dies at 96

With little progress at COP 25 climate summit, attention turns to 2020