Between a lifestyle and a life 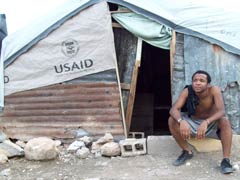 Winddcheley in front of his tent in July

There is a young man in Haiti who is trying to come to the United States. We are trying to help him. January will mark one year since we started the application process for Winddcheley’s student visa.

My husband and I made an appointment to talk to Winddcheley on Saturday morning. We are driving to Denver, and my husband’s Blackberry is synced with his in-car phone system. The audio is set for speakerphone. I have the passenger seat warmer on high to ease the ache in my lower back. I have a bottle of water. While we are waiting for the call we listen to the Sinatra channel on our satellite radio.

We know that Winddcheley is walking to an Internet café near Port-au-Prince. He will pay to use the Internet. He will spend money on this phone call today, and no money on food. Winddcheley does not eat every day. He is always hungry. He hopes the Internet will be up and working at the café. He hopes he won’t walk for nothing. It is no small thing to expend calories one doesn’t have.

The phone rings. We exchange greetings. I am looking out the window into the bright eastern sky as I listen to Winddcheley. We are passing a new development off Highway 83 called “Flying Horse.” It has a golf course, a fitness center and a clubhouse. “Flying Horse,” the brick stanchions proclaim, offers more than houses. It offers a lifestyle.

My husband and I have a lifestyle. Winddcheley has a life. He will settle just now for clean water.

Winddcheley and his sister are living in a tent provided by the U.S. government. The tent is falling apart in the harsh sun and hard rain. It was set up as temporary shelter after the January earthquake. It is nearly November.

Winddcheley tells us, “It is hard. Life is hard.” For Winddcheley, this talk is high drama. He is usually focused on the future, on the next step necessary to make it out of Haiti. He is always grateful for any help we offer. But today he sounds weary. Nightly rains flood the tent. He and his sister spend hours in the darkness standing on a wooden box, trying to keep, if not dry, then at least not soaked. The ground is soggy and fetid. The water is contaminated by human waste.

Winddcheley failed the English proficiency test by a few points. My husband, an able advocate, pointed out that Winddcheley had taken the test homeless and hungry. He had taken a preparatory class meant to give him some advantage, but because he took the test in the Dominican Republic, this native Creole speaker had been coached for an English proficiency exam in Spanish. The low score was accepted “in light of extraordinary circumstances.” Indeed.

The college had concerns that we could, and would, pay for his tuition. We provided proof of financial solvency. We received a desultory note from an official informing us that Winddcheley could expect to hear from the college “around the end or near the first of the year.”

My husband, by way of reply, sent a picture of Winddcheley in front of his tent. He pointed out that a young man in the midst of autumn rains and rising waterborne diseases could use a swifter response.

The forms were duly mailed to Haiti. Three weeks passed. Winddcheley walked to the post office in Port-au-Prince. They have not arrived, or perhaps they arrived and were stolen by another desperate man or woman. Perhaps the papers were misplaced.

My husband talks to Winddcheley about getting replacement papers. The embassy will not accept photocopies. The college will have to send new originals. Winddcheley suggests using DHL for the delivery.

On Monday morning, I drive to my local supermarket. I can use my debit card to send money to Winddcheley. I bring my iPad along. There is a recipe for braised beef on my Epicurious app that I want to try. My iPad allows me to check that I have all the right ingredients for the dish.

I stand in line at the Western Union service counter. A clerk takes the paperwork from me. She asks for the recipient’s address. I tell her he has no address. She raises her eyebrows. I say, “He lives in a tent.”

“I’m not sure if it’s his last name,” I tell her. “I’m not sure if that’s how the Haitians would characterize it.” And I can see that I am telling her more than she needs, or cares, to know. “It’s his mother’s family name,” I say. Then I mutter, “It needs to be on the form.”

The clerk calls Western Union again. While she’s waiting for someone to answer her call, she asks me if I send a lot of money orders. I walk over to the coffee kiosk. I want the clerk to know this is also taking longer than I planned.

The Monday before I stood in line at Western Union, I sat on the tarmac in Dayton, Ohio, waiting for a faulty valve on the airplane to be replaced so that we could fly to Denver. I was irritated by the delay. I caught a 5 a.m. shuttle for this?

I waited until it was 6:30 in Colorado before I called my husband. I let him know I would not be able to meet the painters at the house at one. Yes, I sighed, I would call the company and reschedule. I let him know my morning had been wasted. Wasted.

I can tell that the clerk is impatient with me. I persist. I want this money order to go through. I say, “It’s really important,” in my most concerned voice. I want her on my side. “It’s very bad down there,” I say.

I’m not sure how to answer. Haiti. You know, Haiti? The place we watched fall apart on television last winter? Anderson Cooper looking indignant? Collapsed schools and crushed kids?

I thought surely she had heard the word Haiti and pegged me as Lady Bountiful. Now, it seems, she just thinks I’m a woman who can’t send a freakin’ Western Union money order. I have become Frontier Airlines, unable to find the errant part, unable to fix the faulty valve.

“Well, there was the earthquake,” I say, folding my paperwork and checking to make sure I haven’t left my iPad on the counter. “And now there’s a cholera epidemic.”

I say cholera is a waterborne disease. People can get sick and die the same day, I say. Drinking contaminated water causes it, I tell her. “You know, human feces in the water.”

She makes a face. Gross.

I look around. There is a line. People are waiting. They have to get back to work. Me too. I have to find those really sweet organic onions. The braised beef just won’t be the same without them.

[Melissa Nussbaum is an NCR columnist who lives in Colorado Springs, Colo.]

World | Between a lifestyle and a life

U.S. priest released from hospital after attack in Nepal

Lessons from the Levant

Parliament focuses on Charter for Compassion