Bishop: South Sudan has become 'the place where God weeps' 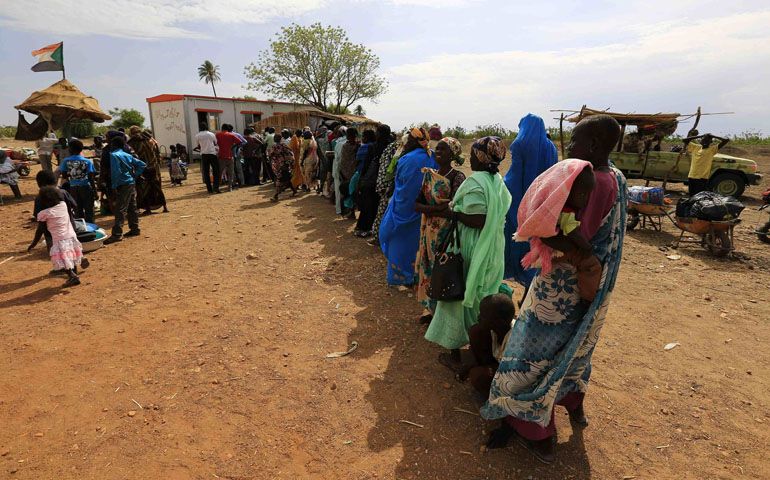 South Sudanese fleeing an attack wait to register April 19 after arriving at a border gate in Joda, along the Sudanese border. (CNS/Reuters/Mohamed Nureldin Abdallah)

South Sudan's civil war has taken a brutal turn, despite appeals from the country's church leaders to stop the violence.

In the oil hub of Bentiu, rebels loyal to ousted Vice President Riek Machar, an ethnic Nuer, killed more than 200 civilians and wounded more than 400 in mid-April, the United Nations reported Monday. People were slaughtered inside a mosque, a hospital, and the city's Catholic church. The U.N. said hate speech was broadcast on local radio stations, urging certain groups to leave the city and encouraging men to rape women.

In a separate incident April 17, at least 58 civilians were killed and more than 100 injured when an armed group of largely Dinka youth attacked a U.N. base in Bor, where some 5,000 mostly Nuer civilians had taken refuge. The U.N. Security Council said the attack may "constitute a war crime."

President Salva Kiir, a member of the Dinka tribe, addressed the incident Sunday, telling worshippers at a Catholic Mass in Juba that the Bor attack was an "irresponsible act by irresponsible people."

A Catholic bishop involved in peace talks to end the fighting said this year's bloodshed could not be blamed on Arabs in the North, as was the case during the long liberation struggle to free the South from control by Sudan.

"During the civil wars, you could see the blood of our people dripping from the hands of others. But from whose hands is the blood dripping now? Who is killing Christians now? It is we, the Christians. And we're not ashamed. If we were ashamed, we would stop it," Bishop Paride Taban told Catholic News Service in an April 4 interview in Juba.

Taban is the retired bishop of Torit, and in January he mediated an end to an armed conflict between the government and forces loyal to David Yau Yau, a dissident general in restive Jonglei state. Yau Yau had led an armed rebellion of ethnic Murle since 2012.

In March, Taban took his peace effort to neighboring Ethiopia, where peace talks between representatives of Kiir and Machar have sputtered along since January, and where representatives of South Sudan's Catholic bishops are part of a civil society delegation. Taban said someone there referred to the church as a watchdog in the current peace process.

"But I said the church is a guide dog. We cannot just watch. There are people watching football who never play, they just clap their hands. The church has to be a player. We are not people who watch. We should be involved in guiding, not watching. But that's how the church has been treated in our country. We are just watchers," he said.

Taban, 78, compared the situation in South Sudan to Rwanda, which recently commemorated the 20th anniversary of a genocide that killed more than 500,000 people.

"I used to tell people that when God created South Sudan he laughed, but this has become the place where God weeps," he added.