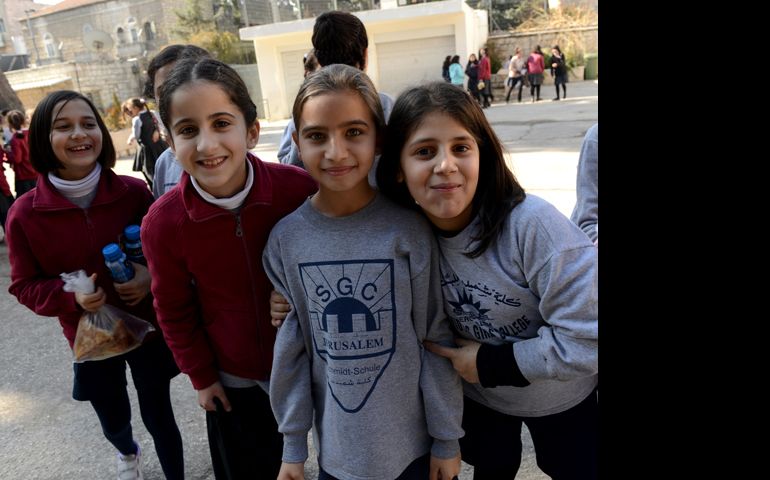 Palestinian girls play in the courtyard of Schmidt's girls school Wednesday in East Jerusalem. Bishops from North America, Europe and Africa met with students during a solidarity trip to the Holy Land. (CNS/Debbie Hill)

Jerusalem — Bishops from North America, Europe and Africa called on international leaders to act immediately so people living in the Gaza Strip can have access to basic necessities.

"Gaza is a man-made disaster, a shocking scandal, an injustice that cries out to the human community for a resolution. We call upon political leaders to improve the humanitarian situation of the people in Gaza, assuring access to the basic necessities for a dignified human life, the possibilities for economic development and freedom of movement," they said in their statement Thursday.

The bishops spent two days of their Jan. 11-16 trip visiting Christian schools and social and health institutions in Gaza as well as meeting with the local parishioners. Their visit, known as the Holy Land Coordination, is an annual event that began in 1988 at the request of the Vatican. Each year, they come at the invitation of the Assembly of Catholic Ordinaries of the Holy Land and focus on prayer, pilgrimage and advocacy with the aim of acting in solidarity with the local Christian community.

The tiny Christian community of Gaza is made up of about 2,500 Christians out of a total Gazan population of more than 1.5 million people. The majority of the Christians belong to the Greek Orthodox Church, with just under 200 Catholics living in Gaza. Israel has blockaded the Gaza Strip since Hamas took control in 2007, although it loosened restrictions in 2010. Egypt opened one border crossing to Gaza in 2011.

"In the seemingly hopeless situation of Gaza, we met people of hope," the bishops said. "We were encouraged by our visit to tiny Christian communities which, day after day, through many institutions, reach out with compassion to the poorest of the poor, both Muslim and Christian."

At least one bishop remarked on the destroyed buildings and pock-marked facades that remain from Israeli shelling of Gaza.

In their statement, the bishops noted the warmth with which they were received in Gaza, and also the Christians' request that they not be forgotten by the world's Christians, whom they asked to pray for them and support them in whatever way they can.

Bishop Richard Pates of Des Moines, Iowa, chairman of the U.S. bishops' Committee on International Justice and Peace, said he was impressed by the "efforts for education" at Bethlehem University, the Schmidt's Girls College in East Jerusalem, and the Catholic schools in Gaza.

"(These efforts) build a foundation which have a final impact on the interaction with different cultures and faith," the bishop said during a Jan. 15 visit to the German Catholic girls' school, where some 500 girls study from kindergarten through high school. "Education offers a perspective that will hopefully give way to peace."

Rudiger Hocke, headmaster, told the bishops that several graduates of the school have already served in Palestinian governmental positions. He said while the school does not encourage emigration, it sees its mission as preparing its students for wherever life might take them.

Archbishop Paul-Andre Durocher of Gatineau, Quebec, president of the Canadian Conference of Catholic Bishops, said he was struck by the important role Christian institutions and organizations such as the schools play in reconciliation between Christians and Muslims.

"We often picture Muslim-Christian relations in the rest of the world being antagonistic but here ... at least where Christian institutions are running (programs), they really build relationships. It is quite remarkable and hope-filled," Durocher said.

He compared the complete isolation of the Gazans to building a wall around Montreal and not giving people freedom of movement. Nevertheless, he said, "the complexities of the issues are overwhelming."

"From outside it is difficult to understand why (the Israelis and Palestinians) don't just sit down and talk and solve their problems. But then you realize that the roots of the problem (of) distrust are built over decades of fear, and that kind of feeds everything," he said.

In this situation what is most remarkable is the resilience of the people, he added, and the hope they maintain in the midst of their struggle.

"It is a testimony to the human spirit," he said.

Bishop Declan Lang of Bristol, England, said it is also important to "have sensitivity to the needs of the people who live in Israel."

"We have to (hear) the hope, fears and expectations of both communities," he said.

South African Archbishop Stephen Brislin of Cape Town said he felt a "great affinity" with the Palestinians, whose suffering he compared to blacks in South Africa under apartheid.

"I personally would not call (Israel) an apartheid state. I believe there are nuances in the Holy Land which must be recognized ... but it is very similar to apartheid in the sense of the loss of human dignity and of the subjection of people to the political will of others," said Archbishop Brislin.

He said South Africa's example should offer hope to the people of the Holy Land.

"We must never forget that democracy in South Africa brought not only liberation to black people but also to white people, because it freed whites from the burden of oppressing people and allowed us to develop normal relationships with our fellow human beings," the archbishop said. "The same can be true of the Holy Land, and I believe it will be."

Kurtz: With discussions, synod 'doing what it's supposed to do'