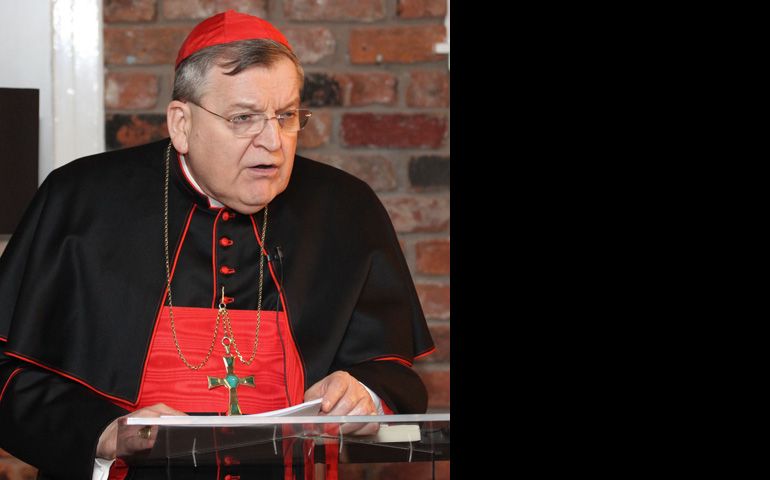 Chester, England — The new evangelization of Western societies will fail unless the church succeeds in transmitting its teachings on marriage and the family to Catholics, said U.S. Cardinal Raymond Burke, patron of the Knights of Malta.

The success of efforts to convincingly preach anew the Gospel in secularized societies rests on the ability of Catholics to faithfully abide by the church's teachings, Burke said.

He said the obedient Christian witness of faithful married couples was critical to the renewal of the church and society and said Catholics must be willing to suffer in their efforts to uphold the truth of marriage.

"The challenge which confronts the whole church confronts particularly the church in the first cell of her life, which is the family," he said in a March 6 speech, "Remaining in the Truth of Christ on Holy Matrimony."

"If we can't get it straight with regard to the truth about marriage and the family, we really don't have much to say about anything else," Burke told more than 150 people at a meeting organized by Voice of the Family, an initiative of Catholic laity in support of the 2014-2015 Synods of Bishops on the family.

The cardinal said it was clear "that if a new evangelization is not taking place in marriage and in the family, then it will not take place in the church or in society in general."

"At the same time, the marriages transformed by the Gospel are the first and most powerful agent of the transformation of society by the Gospel," he added. "The witness of the family is, therefore, at the heart of the new evangelization."

The cardinal said there was "nothing more important" than safeguarding and fostering the truth about marriage and the family.

Without naming anyone, he criticized church figures who, he said, "will obscure the truth of the indissolubility of marriage in the name of mercy, who condone the violation of the conjugal union by means of contraception in the name of pastoral understanding and who, in the name of tolerance, retain silence on the very integrity of marriage as a union of one man and one woman."

In a talk that lasted more than an hour, the cardinal cited the teachings of the Second Vatican Council, St. John Paul II and retired Pope Benedict XVI, but made scarcely any mention of the teachings of Pope Francis.

In October, Burke, the former archbishop of St. Louis and a distinguished canon lawyer, emerged as a prominent critic of the proceedings of the extraordinary Synod of Bishops on the family.

Shortly afterward, he was removed from his position as head of the Vatican's highest court amid "legal restructuring," a decision Pope Francis said had been made before the synod.