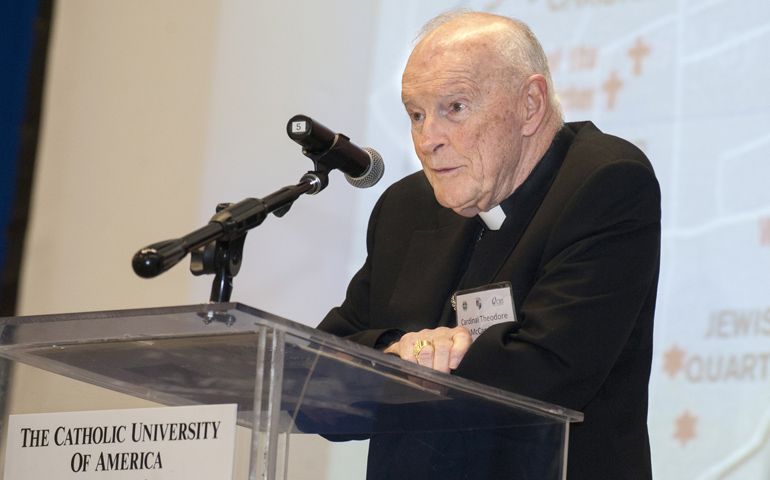 As the U.S. Congress prepares to vote on whether to launch a military strike in Syria, one Catholic prelate who has traveled extensively in the region spoke Monday of the struggles already facing refugees from the 19-month Syrian civil war.

Washington's retired Cardinal Theodore McCarrick, speaking at a conference on peace in the Holy Land, had just returned from Jordan, where he said he visited some of an estimated 500,000 Syrians who have fled their country since March 2011.

Seeing Syrian children in Jordanian refugee camps "breaks your heart more than anything else," McCarrick said

"They are so frustrated, and they don't know why," he continued. Some of the refugees, the cardinal said, were Iraqis who fled to Syria after the 2003 U.S.-led invasion of Iraq.

McCarrick did not mention President Barack Obama's request for Congress to approve a military strike against Syrian President Bashar Assad's government, but he said the key to resolving the Syrian conflict is "patient diplomacy."

He spoke at The Catholic University of America, which hosted a one-day conference on finding a "path to peace" in the Holy Land, focusing on issues of religious freedom and human rights. The U.S. bishops' conference and Catholic Relief Service co-sponsored the event, which was held by the university's Institute for Policy Research and Catholic Studies.

Other speakers included U.S., Israeli and Palestinian experts on human rights issues in the Middle East as well as the president of Bethlehem University, a Catholic university in the Israeli-occupied Palestinian West Bank run by the De La Salle Christian Brothers.

Blaire told NCR he and the other bishops are in Washington for a regular meeting of the U.S. bishops' administrative committee. That panel is made up of 36 bishops, mostly conference committee heads, who direct the work of the entire conference between its twice-yearly plenary sessions.

The bishops are likely to discuss the conflict in Syria during their meeting, scheduled for Tuesday and Wednesday, Blaire said.

Auxiliary Bishop Denis Madden of Baltimore, who heads the bishops' committee on ecumenical and interreligious affairs, said he expected the administrative committee to watch Obama's address to the nation Tuesday night.

"I wouldn't be surprised that, depending on how he speaks and what he says, that we would make some kind of a response, especially since the pope has come out so strongly," Madden said.

The bishops could respond with a statement signed by every member of the administrative committee or on their behalf by New York Cardinal Timothy Dolan, the president of the bishops' conference.

Last week, Dolan and Pates co-wrote separate letters to Obama and to all members of Congress, asking them to pursue dialogue instead of military intervention. A military strike, they said in their letter to Obama, would be "counterproductive [and] will exacerbate an already deadly situation."

"It never should be a military intervention," Madden told NCR on Monday. "We should learn. We should learn from our own history."

While side conversations at Monday's event seemed to focus more on Syria than on the Holy Land, Madden said he thought it was appropriate to talk about both areas at once. The conflict between Israel and Palestinians, he said, "blocks out the real ability to solve other issues in the Middle East."

During his recent visit to Jordan's capital of Amman, McCarrick also participated in a meeting of Christian and Muslim leaders in the Middle East. The cardinal is known for making frequent visits to the region, and on Monday, he referred several times to conversations he's had with Jordan's ruler, King Abdullah II.

In addition to the refugee situation, McCarrick said another concern is the shrinking numbers of Christians in the region. There are now estimated to be fewer than 250,000 Christians in Iraq, where there were some 950,000 before the U.S.-led invasion, he said.

"Where did they go?" he asked. Some, he said, went to Syria, others to Kurdistan. But, the cardinal said, "some of them went to heaven."

Several of the other speakers at Monday's event focused on difficulties experienced by Palestinians under Israeli occupation of the West Bank and the Gaza Strip.

Raffoul Rofa, director of a Jerusalem-based Catholic human-rights group named the Society of St. Yves, spoke of his organization's efforts to pursue litigation for Muslims and Christians who are denied access to holy sites, such as the church of the Holy Sepulcher in Jerusalem's old city, by Israeli authorities.

"Why is it that Israel allows the Jewish faithful to have access ... and denies this to others?" he asked. "That is a question that has to be answered."

Jessica Montell, the director of B'Tselem, an Israeli human-rights group, said the continuing foundation of Israeli settlements in the West Bank are "giving real hardship to Palestinians, violating a range of rights."

Montell, a Jew who moved from the United States to Israel decades ago, said religious leaders must work to "reclaim religious faith ... as a source to promote human rights."

Among those in attendance at Monday's event were also a number of religious leaders from other faiths, including Archbishop Vicken Aykazian, director of the ecumenical affairs office of the Armenian Orthodox church in America, and Rabbi David Saperstein, director of the Religious Action Center of Reform Judaism.

[Joshua J. McElwee is NCR national correspondent. His email address is jmcelwee@ncronline.org. Follow him on Twitter: @joshjmac. He is a graduate of The Catholic University of America.]