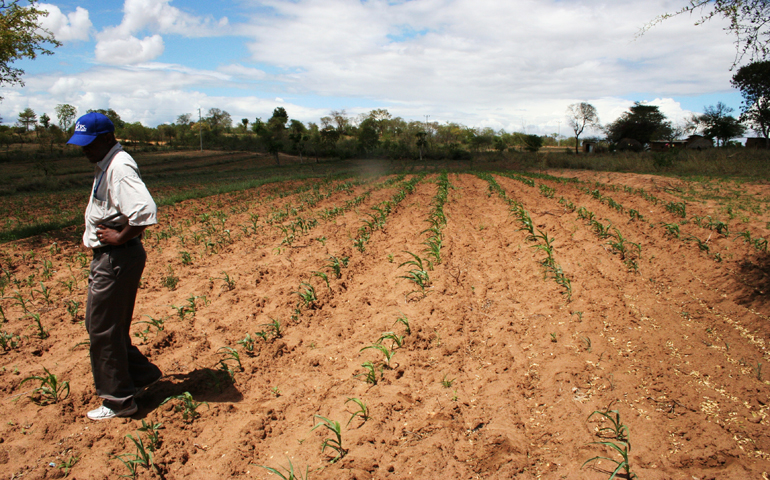 Catholic observers and representatives of Catholic humanitarian groups are giving what might be described as "Yes, but ..." support to the next stage of the United Nations' efforts to end global poverty.

Their support is measured because they and others believe the U.N.'s current Millennium Development Goals (MDGs), developed in 2000 with the aim of eradicating extreme poverty by 2015, were drawn up without the participation of the poor and of the groups actually working to solve the problems of poverty and hunger.

"When I go to villages every weekend, I see people who are hungry. They want food, employment, shelter," Ghana Archbishop Gabriel Anokye told NCR. Anokye represents the Symposium of Episcopal Conferences of Africa and Madagascar, known as SECAM. "They are concerned about livelihoods. Pardon me, but they don't know about the MDGs."

Fr. Joseph Komakoma, secretary general of SECAM, added: "Development is not an abstraction. It is the circumstances people live in every day. That is why the process must be inclusive."

In an "outcome document" issued Sept. 25, U.N. member states agreed to renew their commitment to the goals' targets and said the United Nations would hold a summit in fall 2015 to adopt a new set of goals that would focus on the eradication of poverty and sustainable development.

The eight current goals are:

In their statement, U.N.-member states praised the goals as having "provided a common vision and contributed to remarkable progress." But the states acknowledged that members of the United Nations remain "concerned at the unevenness and gaps in achievement and at the immense challenges that remain." They added that "unrelenting efforts are required to accelerate progress across all the goals."

As one example of the mixed record, the U.N. has said that the number of children under the age of 5 who are dying dropped from 12.4 million in 1990 to 6.9 million. That is about 14,000 fewer children dying every day, yet child deaths remain a serious problem in many parts of the world, including sub-Saharan Africa. There, one out of every nine children die before the age of 5, the U.N. reports.

While agreeing with the member states that the goals have helped focus the world's attention on poverty and related problems, the Catholic representatives underlined the goals' shortcomings.

"We cannot be satisfied with this," Michel Roy, secretary general of the global Catholic humanitarian alliance Caritas Internationalis, said in a statement issued the same day as the U.N. declaration.

"Our members say that the MDGs were necessary but that for many reasons mainly due to the top-down process which was adopted, they have failed to reach the poorest, they may even have marginalized them more in certain cases," Roy said in the statement. "A concrete effect of the will to reach some targets has been to put the focus on those easily reachable, the top of the basket. After all, the goal is to reduce poverty only by 50 percent."

"We don't agree with this. We have to target zero poverty, as every human being has the same right to live a dignified life."

Similarly, Neva Frecheville, co-chairwoman of the anti-poverty advocacy campaign Beyond 2015 and an analyst with the British Catholic humanitarian agency CAFOD -- named for its original name, Catholic Fund for Overseas Development -- said governments "need to start listening to the people and to raise the level of ambition in order to ensure that no one is left behind. Civil society around the world will not accept a framework which does not deal with the structural causes of poverty and injustice."

"The global community gets one chance for deep thought every 20 years," she said, "and this is it."

Such criticisms are not surprising. Nongovernmental organizations and others who make up what is often called global "civil society" see one of their responsibilities as pressuring the U.N. and national governments to respond more forcefully to problems such as poverty, climate change and barriers facing women.

When the U.N. meets, either during General Assembly sessions or for summits to address specific problems such as poverty or HIV/AIDS, so-called side events bring nongovernmental groups together to advocate for specific solutions.

In interviews with NCR, the advocates for Catholic organizations visiting the U.N. the week of Sept. 22 said they and others representing nongovernmental groups felt the U.N. states were, at last, listening to them and hearing the criticisms of how the goals had been drawn up.

"It's certainly a step in the right direction, though what will (ultimately) come out of it, I don't know," Anokye said.

He said U.N. officials acknowledged that, in the case of previous U.N. consultations on the anti-poverty goals, the U.N. had not done a good job of seeking out the participation of faith-based constituents.

"They acknowledged that mistake," Anokye said. In the case of the approximately 200 million Christians in Africa, that includes many of the continent's poor as well as those who run the hospitals, schools and feeding centers that benefit the impoverished.

The archbishop said he carried to U.N. officials a distinctly Catholic message of respect for the dignity of each person and the hope that the issues of development and poverty will not be viewed as separate, unrelated problems.

In a recent statement, SECAM said future goals to eradicate poverty and related problems must take into the account "the integrated and inextricably linked social, economic, cultural and environmental dimensions of development. A set of goals that fail to integrate these dimensions in a balanced way is not acceptable for addressing present and future development changes."

Recounting his pastoral experiences again, Anokye said people in Ghana's rural areas see the problems around them as interrelated. "Please, increase opportunities for us," he says he is told. "Give us employment, give us trade, not aid."

In an interview, CAFOD analyst Bernadette Fischler said many in the development field have joked that the original development goals were drawn up in a dark room by people who devised what some have criticized as a to-do list.

"It should not be white men of Europe and North America who speak for the poor," she said.

Fischler credits the U.N. with hearing those concerns and said in many respects, the "outcome document" reflects a growing sense that development has to be sustainable, meaning it cannot ignore environmental concerns, for example.

How to hold governments accountable on that issue remains unanswered, and that will be one of the questions going into the post-2015 conferences, she said.

One thing is clear, though, Fischler said: The issue of sustainable development is universal.

"No country has achieved sustainable development," she said. "Every country is developing."

[Chris Herlinger is a New York-based freelance journalist and a frequent contributor to NCR on humanitarian and international issues. He is also the senior writer for the humanitarian agency Church World Service.]

A version of this story appeared in the Oct 11-24, 2013 print issue under the headline: 'Top-down process' said to stymie UN goals.