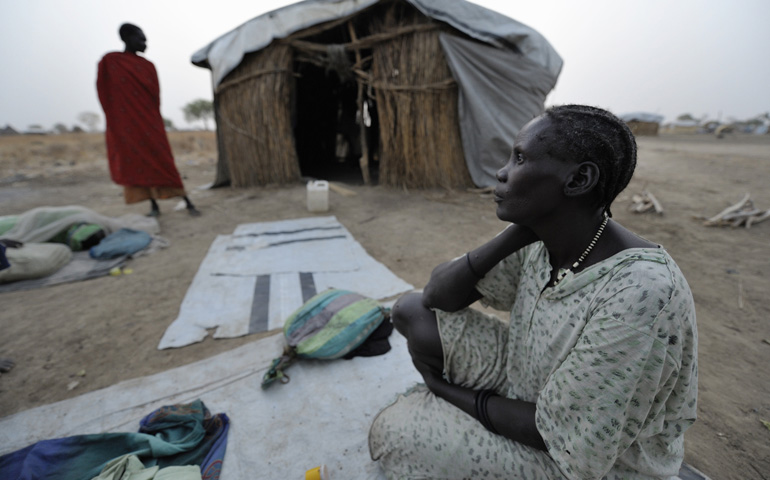 A displaced woman awakens in the morning after sleeping outside on the ground in 2013 in front of shelter in Agok, in the contested Abyei region along the Sudan-South Sudan border. (CNS/Paul Jeffrey)

Catholic workers in the contested region of Abyei say the world has lost interest in the unresolved border feud between Sudan and South Sudan, so they are launching new efforts to make peace between the two ethnic groups that claim the isolated region.

"We are often disappointed by our brothers in the international community. People know exactly what has happened here. The issue of Abyei was solved. It was clear what was going to happen. But Omar refused, and the world didn't pressure Omar to accept what was right," said Fr. Karlo Kaw, referring to Sudanese President Omar al-Bashir.

Although South Sudan achieved its independence from Sudan in 2011, several areas along the border have remained in dispute, most notably the oil-rich Abyei region.

Under the terms of a 2005 peace agreement, a referendum of Abyei's residents was supposed to decide whether the area would remain part of the North or become part of the eventually independent South. Yet that vote never happened, in part because the government in Khartoum insisted on the inclusion of the nomadic Misseriya, who spend part of each year grazing their animals in Abyei. The Dinka Ngok, who compose the vast majority of Abyei residents and favor alignment with the South, insisted that only permanent residents could vote.

The debate ended when Misseriya militias and northern troops attacked Abyei in 2011, driving more than 100,000 people -- including the two priests who serve the Catholic parish -- into what became a sprawling refugee camp in the town of Agok.

Since civil war broke out in South Sudan in December 2013, however, that conflict has dominated the attention of regional leaders. Abyei has disappeared from the headlines.

"Even though we are forgotten by many, we nonetheless know that God is with us. And we receive help from people all over the world to help us feed those who have been displaced and are waiting for peace," Kaw told Catholic News Service.

Unlike many other conflict zones around the world, Abyei is not filled with nongovernmental organizations providing assistance to the population. Many NGOs are afraid that working in Abyei will anger government officials in Khartoum, who could then deny them access to Darfur and other troubled areas of Sudan.

That leaves the local Catholic parish to provide much of what is needed. With funding primarily from Catholics in the Netherlands, the church has drilled wells, reopened clinics, rebuilt schools and provided seeds and tools in the contested area, providing the basic infrastructure for thousands of displaced to return home.

Frustrated with the lack of official progress toward peace, the Catholic parish of Abyei planned a peace conference in April, inviting more than 100 Dinka Ngok and Misseriya leaders. Yet the meeting was canceled at the last moment after Sudan closed its border with South Sudan, preventing Misseriya participants from traveling to the gathering.

Church leaders say they will continue to push for peace.

"We have to start with people making peace at the grass roots, on the ground, without involving those politicians," said Fr. Biong Kuol, who serves the Abyei parish with Kaw.

"We can leave the big issues to the politicians, but on the ground we are neighbors and we have to live in peace. So we're trying to make small agreements between communities, creating a space for peace without the involvement of governments," Kuol said.

A U.N. security force of some 4,000 Ethiopian soldiers has deterred Misseriya attacks on the main town of Abyei, but militia assaults on outlying villages have kept most families from returning permanently to their rural homes. A Misseriya attack on the village of Marial Achak on March 1 killed four people and left more than 30 homes in ashes. Eight children were kidnapped. More than 4,000 people fled the area for Agok and other areas.

On April 6, another Misseriya militia attack killed six in the village of Kuoldet.

"The politicians are just discussing Abyei based on their own interests, but the people are dying. They don't have shelter. They come to the church because they're hungry. The politicians need to come here and see how people are suffering, then they might find a way to make peace," Deng said.

Negotiations on Abyei resumed in Addis Ababa at the end of March after a hiatus of 23 months, but few expect the delegations from Sudan and South Sudan to come to any agreement.

As national elections approach, al-Bashir has proclaimed that Abyei will remain part of Sudan. His government signed a six-year agreement in January with the China National Petroleum Corp. to pump oil from a part of Abyei where northern soldiers remain ensconced.

Although officials in Juba still officially insist on Abyei's right to self-determination, they're preoccupied these days with fighting rebels in their own territory. Those rebels are supported by the Sudanese government, and many believe that if South Sudan were to push harder on Abyei, Sudan could retaliate with even greater support for the insurgents.

Catholics aren't the only local group seeking new ways toward peace. A women's group sponsored a March gathering in Abyei that brought women from around the region together to talk about peace. The event featured a lot of singing and dancing, what Tabitha Chol, executive manager of the Abyei Women Empowerment Organization, says is a key to peace-building.

"It's important for us to know the songs and dances and traditions of our neighbors, of other tribes and clans. It makes us understand better the lives of others, others with whom we have to live in peace," she said.