Churches' official: 'Everyone in Gaza considers themselves a target' 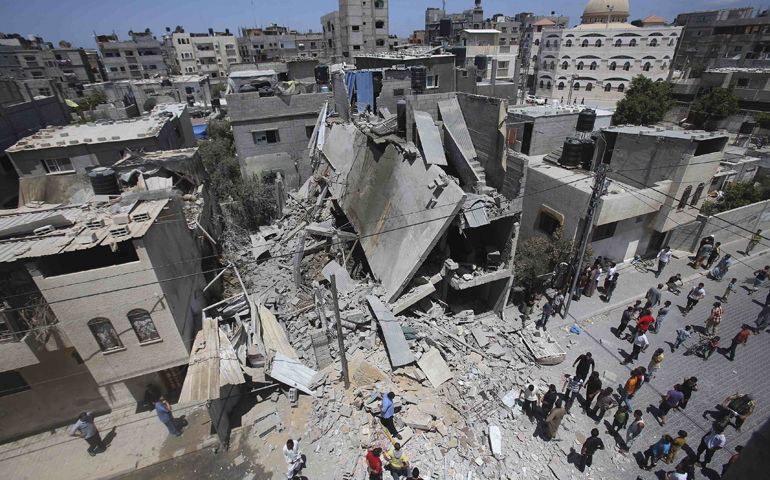 Palestinians in Rafah, Gaza Strip, gather around the remains of a house that police said was destroyed in an Israeli airstrike. (CNS/Ibraheem Abu Mustafa)

Jerusalem — The situation in hospitals in the Gaza Strip is dire, and Palestinians are saying that medical supplies will soon run out, said a cardiologist who serves with the Near East Council of Churches in Gaza.

Dr. Issa Tarazi, executive director of Near East Council of Churches Department of Services to Palestinian Refugees in Gaza, told Catholic News Service by telephone that Gaza's streets have very little traffic, and only emergency and hospital staff workers are working.

"Everyone in Gaza considers themselves a target," he told CNS on Monday. "People are scared about what is going on."

"There are many displaced people," Tarazi added. During the interview, the sound of planes could be heard over the phone as Israel's Operation Protective Shield headed into its second week.

Thousands of people have fled and are seeking refuge largely in U.N. schools and facilities. Israel has said it is keeping humanitarian corridors into Gaza open.

Tarazi said he expected outpatient clinics such as the Caritas clinic and private hospitals to have a greater influx of patients than usual once the hostilities are over because governmental hospitals will have little or no medical supplies left.

The Israeli Defense Forces launched an offensive into the Hamas-controlled Gaza Strip in early July in response to Hamas militants lobbing missiles into Israel.

By Monday, more than 170 people -- about half civilians -- had been killed in Gaza, and hundreds more were injured. In Israel, where the Iron Dome defense system had warded off dozens of Hamas missiles, there was some property damage and a handful of injuries. The situation has continued to deteriorate following the kidnapping and murder of three Israeli youths in the West Bank and the apparent revenge killing of a Palestinian teen.

Tarazi said he had been unable to reach his work since the offensive began, and his wife and 17-year-old son left for Jordan to be with relatives so his son could continue with his studies. His three older children already live abroad, he said. He remained because of job responsibilities as well as to look after several elderly relatives, whom he could not reach because of the bombing.

"The situation is difficult; there is no future in Gaza, no work, no economy. They have to start their life [somewhere else]," he said about his children living abroad. "One day if the situation changes and there is work, maybe they can come back."

Tarazi told CNS that the previous day, a missile landed on a four-story structure not far from where he lives. He said although Israel gives warning "knocks" to residents to leave, they have only seconds to evacuate their homes before the missiles come.

Israel maintains that their warnings give adequate time to civilians to leave the targeted areas, from where they believe missiles have been fired or where weapons are being hidden. Israel says they are also targeting militants' homes.

"We pray for peace and justice," Tarazi said. "We are against the killing of all civilians. It is a vicious circle, one starts shooting and the other replies and the losers are the civilians."

"I hope things calm down and they begin to negotiate peace. We are fed up with this," he added.

Fr. David Neuhaus, patriarchal vicar for the Hebrew-speaking Catholics in the Latin Patriarchate of Jerusalem, told CNS: "What we are seeing is a cycle of violence signaling that especially the Israeli and Palestinian leadership are not willing to live together, despite the fact that when you ask most people here they are willing to do so.

"Instead of the leadership leading the people to a better place, they are keeping them in a deadlock."

Despite the current situation, he said, people must have faith in God's plan, believing that God will "make emerge a leadership who will speak a different language and not constantly refer to the 'enemy' on the other side but to 'brothers and sisters' on the other side."

"There is enough space and resources here to build a society that can give a better future for the children. It will happen, it is only a question of when and how long we will have to wait," Neuhaus said. "Our responsibility as religious leaders is to make sure people are talking in a responsible language which opens horizons and does not shut them. Unfortunately, that is not the language spoken by a large part of the Israeli and Palestinian leadership now."

World | Churches' official: 'Everyone in Gaza considers themselves a target'

New space for pressure on Likud