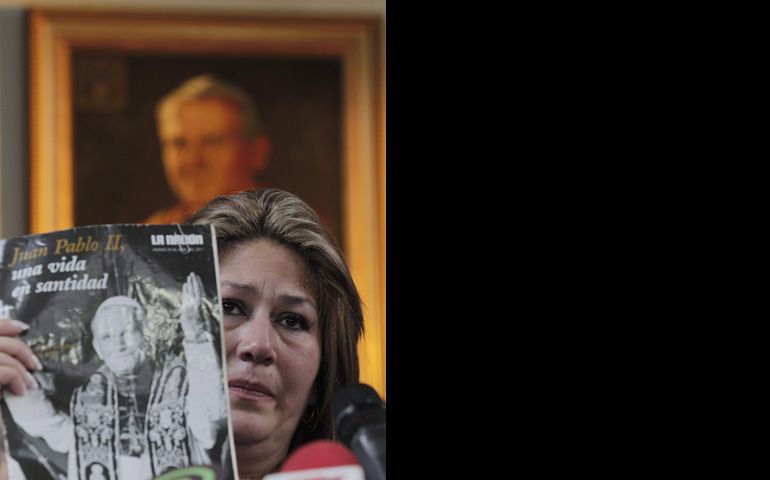 Floribeth Mora Diaz, the Costa Rican woman whose inexplicable cure has been attributed to the intercession of Blessed John Paul II, displays a magazine cover as she gives her testimony to the media Friday in San Jose, Costa Rica. (CNS/Reuters/Juan Carlos Ulate)

Santo Domingo, Dominican Republic — After doctors told Floribeth Mora Diaz that a brain aneurysm left her with days to live, she retreated to her Costa Rican home and prayed to Blessed Pope John Paul II.

From her bedroom in a small town in Costa Rica's Cartago province, Mora said she heard his voice. "Rise! ... Don't be afraid."

She got up from her bed, prompting her husband to ask her, "My love, what are you doing here?" As a teary-eyed Mora recalled at a Friday news conference, she responded to her husband, "I feel better."

That was in May 2011. Doctors could not explain the rapid improvement, and Mora became the second miracle attributed to the Blessed John Paul, who died in 2005. The first miracle was a French nun cured of Parkinson's disease the same year.

On Friday, Pope Francis signed a decree allowing for the canonization of Blessed John Paul and Blessed John XXIII.

Later that day, Mora addressed the media from the Costa Rican capital, San Jose. With a portrait of Blessed John Paul hanging behind her, Mora told reporters she had faced imminent death.

She began suffering from intense headaches in April 2011 and was diagnosed with an aneurysm. Her life was in danger, her physician, Dr. Alejandro Vargas, told reporters after the news conference.

"It was very sad," Mora said, "seeing my children looking at me, standing next to my bed, seeing my husband making himself strong."

Mora's family had built an altar to Blessed John Paul, and she was given a gift of a magazine with his photograph on the cover.

Mora said as she stared at the photograph, Blessed John Paul began to speak to her.

"I was surprised. I kept looking at the magazine. I said, 'Yes, Lord,' and I got up," she told a Mexican television station in an interview.

She held the magazine at the news conference as tears rolled down her cheeks.

Vargas told a local television that there was no medical explanation for her improvement. "It surprised me. ... I said, 'It really is a miracle because I can't explain it,' " he said.

"But I always kept my faith. I have always been a firm believer. I have a deep love of God," she said.