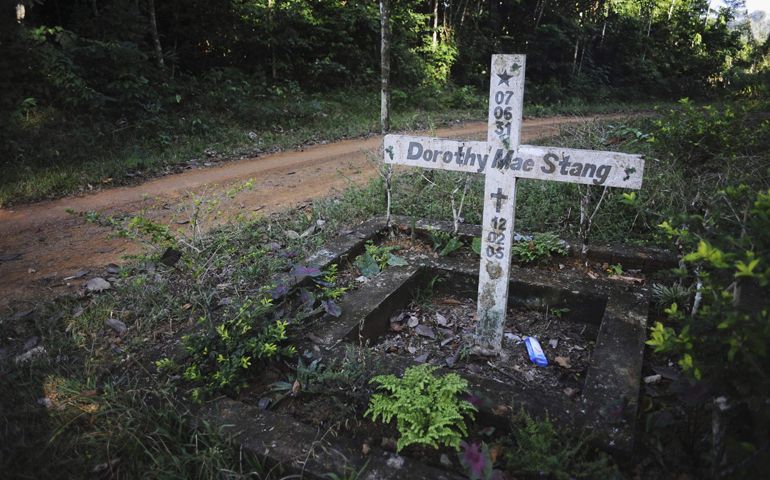 A cross stands on the spot where U.S. Sr. Dorothy Stang, a member of the Sisters of Notre Dame de Namur, was murdered Feb. 12, 2005, on an isolated road near the Brazilian town of Anapu. (CNS/Reuters/Lunae Parracho)

Sao Paulo — In the 10 years since U.S.-born Sr. Dorothy Stang was killed by ranchers in the Amazon, the risks have not decreased, said one of the coordinators of the Brazilian bishops' Pastoral Land Commission.

Antonio Canuto, one of the commission's coordinators, said although the 73-year-old nun's assassination in Anapu brought awareness of the plight of the peasants with whom she worked, this has not been enough to decrease impunity in the region.

"The reality continues the same as it was when Sister Dorothy was alive," Canuto said.

The Pastoral Land Commission said in the past 10 years, 106 people were assassinated due to land conflicts in Para state alone.

Canuto said of the five people arrested and convicted for Stang's assassination, only one remains in prison; three are in a semi-open system, where they are only required to sleep in prison and may work outside during the day; and one has yet to serve prison time.

"What has changed [with the assassination] is that the reality of those who work in places like Anapu has become wider known," Canuto said. "Sister Dorothy brought to her work an international recognition. It led people from all over the world and within Brazil to identify themselves with her cause."

Stang, a member of the Sisters of Notre Dame de Namur, was shot several times in the chest and head Feb. 12, 2005, as she headed to meet officials from the National Institute of Colonization and Agrarian Reform to discuss the demarcation of land for peasants.

On Feb. 12, Bishop Erwin Krautler of Xingu will celebrate a Mass in Anapu to commemorate Stang.

To those who knew her, Stang was a revolutionary who fought for education and a better way of life for those living in remote regions of the Amazon forest.

"She organized unions and founded schools so that the children in the region would be able to get an education," said Sr. Margarida Pantoja, a member of the Missionaries of St. Therese of the Child Jesus and one of the founders of the Dorothy Committee, a human rights group created by religious and activists to oversee the trials of those accused of murdering the nun. Pantoja​ said Stang was able to set up primary through high school classes in landless peasant campsites.

"She went to Belem [capital of Para] to demand that schools be implemented in camp sites, so that children could learn how to read and write," said Pantoja​, who met Stang two years before she was assassinated. Pantoja​ said Stang was even able to obtain funding from her friends in the U.S. to be able to pay for several students to go to the city of Macapa to study and bring back to Anapu innovations in agriculture.

She also said the local plant that today manufactures flour from bananas was an initiative of those students Stang helped.

Now is the time for married priests

Brazil bishop: Our planet 'is in intensive care,' but COP26 delayed treatment