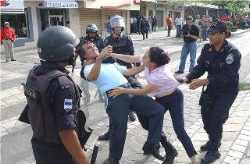 David Murillo sat in a police station in Juticalpa, Honduras. He was presented with a blank piece of paper, and told to sign it. The gun on the same table told him his fate if he refused. He signed, and then a woman in a ski mask came in and typed his supposed “confession” above his signature. It included murder and rape, and it was published everywhere to discredit him.

Such is life for many who dare to protest the coup d’etat that took place in Honduras on June 28th in the wee hours of the morning. At 5 a.m., members of the Honduran military ousted the elected President, Manuel Zelaya, from bed and flew him out of the country to Costa Rica, literally in his pajamas.

The OAS, the European Union, and President Obama immediately condemned the coup. But many analysts close to the situation say the United States – which has overwhelming influence in Honduras – has not taken effective actions which can literally end the coup. Even U.S. rhetoric has moved away from the word “coup” since the initial condemnation, since that would trigger several required actions, like suspension of aid.

In light of all these developments, the Quixote Center, a faith-based justice center headquartered in Brentwood, MD, launched an emergency U.S. Delegation of Solidarity, Accompaniment and Witness to coup-ravaged Honduras. It included Tom Loudon, one of the Center’s co-Directors. One of the people the delegation visited was the imprisoned David Murillo.

Conservative analysts lay all the blame for the coup on President Zelaya. They say he had violated the constitution of Honduras by calling for a non-binding vote in June, asking the people of Honduras if there was need to include on the November ballot a question about establishing a Constitutional Assembly to reform the Honduran Constitution. That, they say, violated the law and the Constitutional, and Zelaya “had to be” ousted.

The social movements of Honduras maintain this is a surface analysis and a sham. They note that the Honduran Constitution was written in 1982, when John Negroponte was the U.S. Ambassador in Honduras, trying to find ways to overthrow the Sandinistas in Nicaragua next door. These movements have long said that their constitution was written – essentially by the United States – during that period to shore up U.S. economic interests and thus the wealthy elite of Honduras. And that Honduran Constitution contains provisions that are permanent, and may not be changed! Can you imagine our having no ability to amend our Constitution? That’s the equivalent.

Articles that may not be changed include some that enshrine current economic arrangements, which have long favored the wealthy interests of Honduras, the so-called “ten families,” over the interests of the poor. Not surprisingly, the social movements of Honduras regard constitutional change as key to any meaningful change in the status of the poor.

In the face of this, President Zelaya – who set out to try to raise up the poor – did raise the minimum wage, but he found that the Constitution was a barrier to other basic economic reforms, and he called for this non-binding poll on the need for Constitutional reform.

That’s what precipitated the coup. On the surface, it’s constitutional; but in its deepest roots, it’s economic. To put it bluntly: the poor were getting uppity and challenging the established order. And they had a president who supported them. It’s not surprising that the imprisoned David Murillo said about President Zelaya, “I have never seen a president like this. He has broken the walls behind which the people were held.”

The Catholic church in Honduras is split. Catholic Bishop Luis Santos Villeda of Santa Rosa de Copan said bluntly that the wealthy elite are behind the coup. He told Catholic News Service, "Some say Manuel Zelaya threatened democracy by proposing a constitutional assembly. But the poor of Honduras know that Zelaya raised the minimum salary. That's what they understand. They know he defended the poor by sharing money with mayors and small towns. That's why they are out in the streets closing highways and protesting (to demand Zelaya's return)." He called for dialogue between the elite and Honduras' poor and working-class citizens.

His views are markedly different from those of Cardinal Oscar Rodriguez Maradiaga of Tegucigalpa, the capital of Honduras. He has publicly urged President Zelaya not to return. He claims to have the support of the Bishops’ Conference, but many Honduran bishops are foreigners, and have not expressed a view on the coup.

Meanwhile, the popular movements have been in the streets by the thousands, calling for the restoration of Zelaya as President. According to the Quixote Center delegation, they have been met by beatings, arrests, and general repression.

COFADEH, the Committee of Families of Detained and Disappeared in Honduras, reports that in addition to the militarization of public utilities and agencies, members of the [Battalion] 3-16 death squads responsible for the disappearances of the 1980's are being placed in public positions. But the movements appear undaunted.

At the moment, they are calling for seven days of protests, focusing on the capital, Tegucigalpa, and San Pedro Sula, the country’s second largest city. Thousands of campesinos and campesinas are reportedly already headed for those cities on foot. The action is set to culminate in a massive protest on August 11th. In fact, they have called for a Global Day of Action in Solidarity with the people of Honduras, and many actions are planned in the United States, including Washington, DC.

Bishop Luis Santos Villeda of Santa Rosa de Copan may be right when he described the coup leaders in much the same words as those used by the protesting people, "They are gangsters, but their game is up. They plot together over dinner one night but the next day pretend to have disagreements in order to deceive the illiterate. They don't care that children are dying of hunger, or that people die in hospitals without medicine."

Maybe their game is up. But until then, David Murillo remains in prison, mourning his young son, who was shot at the airport the night that Zelaya tried to return to Honduras shortly after the coup. And much of Honduras awaits new developments, new word from the one capital of the world that could change their situation almost overnight: Washington, DC.

In the face of this, the Quixote Center delegation met with U.S. Ambassador Hugo Llorens in Tegucigalpa on August 7th, describing the situation as they found it, and demanding that the U.S. call a “coup” and “coup,” cut off aid as required by such a label, revoke all visas of the coup leaders, and cease training Honduran military officers at the School of the Americas. The group emphasized that the people are not going to be beaten back, that the resistance is growing, and that international accompaniment and witness will continue unbroken - documenting the repression and speaking out internationally.

They also delivered a letter to the Attorney General of Honduras, Luis Albert Rubi, on behalf of several human rights groups, demanding to know what is being done to investigate several murders, denial of freedom of movement and the press, instances of torture, death threats received on cell phones, and threats against university students.

Sister of Loretto Maureen Fiedler is the host of Interfaith Voices, a public radio show, heard on 62 radio stations in North America.
t

In Holy Land, it's 'I am Christian'; denominations aren't so important

Peruvian parish follows the flow of the river