Documentary delves into players in the dangerous game of oil 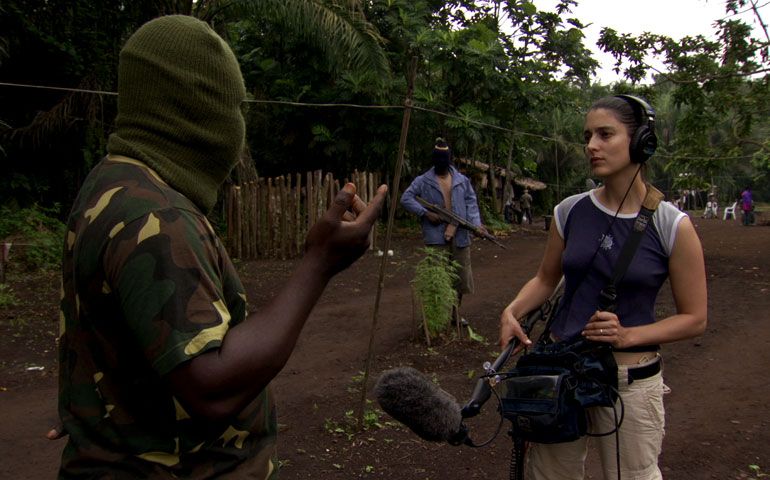 Juba, South Sudan and New York — Not even a few days into an assignment in South Sudan, a colleague who had just spent time in areas where the control of oil is dangerous sport (and causing huge problems) mentioned the dynamic of "big men."

The term is often used in Africa, suggesting powerful political or economic players who aren't shy about commanding attention and, more often than not, fear. Not surprisingly, such abilities are accompanied by the appropriate accoutrements: bling, bodyguards and ballistics.

Also in Africa, being a "big man" has a lot to do with if you are a player in the game of oil.

At one point in Rachel Boynton's eponymous, and very fine, film "Big Men," someone asks: Surely everyone wants to be a big man (or big woman), right?

The question is revealing, and stayed with me in the week between seeing the film during a New York City run and then interviewing people in South Sudan about what happens next to a country where political and economic one-upmanship has caused serious humanitarian problems, some related to oil.

While Boynton's film is not an explicit moral meditation or fable on good and evil, it certainly has elements of the genres, forcing the viewer to ask critical questions about the nature of oil politics -- as in who should control the development, exploitation and use of that most prized commodity?

"Big Men" has a dizzying narrative, centered on the story of Kosmos Energy, a Texas-based oil company that had the good fortune (if we can call it that) of first discovering, and then developing, an offshore oil field in the West African nation of Ghana.

In what is a bravura bit of film access, Boynton captures Kosmos staff, executives and board members talking openly and candidly -- at home, at offices, on flights aboard private jets -- about the strategies and accompanying rewards and frustrations that came with this discovery of Ghana's first commercial oil field.

Intercut with this roughly four-year (2007-2011) narrative are other views. In Ghana itself, two successive national administrations hold different views about Kosmos' plans for the oil. The outgoing administration favors the deal; the incoming administration is determined that Ghanaians have some cut of what is expected to be a bonanza of new riches.

The new government's worry is partly based on the experiences of another country, also shrewdly observed: Nigeria. There, oil exploitation in the Niger Delta has corrupted all levels of society. As one example, armed militant groups who argue they should get their share of oil riches portray themselves as Robin Hoods, but are little better than violent gangs.

Without giving too much away, Kosmos can claim a victory of sorts by the end, and it remains an open-ended question whether the impoverished people of Ghana will eventually see much benefit from the find.

The ambiguous outcome is perhaps less affecting than some of the remarkable moments that Boynton captures. Kosmos' CEO -- Jim Musselman, a likeable and unflappable Texan -- is let go as head of the company. But he remains Kosmos' single largest stockholder and, on the floor of the New York Stock Exchange, poignantly, if quietly, savors the moment when the company goes public. He stands to make a fortune.

By contrast, a Ghanaian oil company manager who was unfairly tarnished as corrupt is seen as constantly having to defend his honor in front of his former colleagues and the U.S. bosses who fired him. The viewer senses this humiliation is something the man will carry with him for life.

That is hardly a surprise: The Africans often speak about honor, and in almost religious language, using biblical symbols and allusions. By contrast, the Kosmos representatives, though open about what is taking place, still employ the cool argot of American capitalism. Anyone from the United States who has spent time in Africa will recognize this clash of language worlds and worldviews.

Whatever one's feelings about the Africans and the Americans -- and I have to confess I came into the film prepared to dislike the oil guys but ended up admiring their determination and moxie -- Boynton is to be credited with a film that doesn't pass judgment on Texas oil men, Ghanaian political leaders, or young Nigerian militants with guns. Perhaps one reason is obvious: In many ways, all of them aspire to be big men.

[Chris Herlinger is a New York-based freelance journalist and a frequent contributor to NCR on humanitarian and international issues. He has reported on Darfur for NCR and is the co-author of the book Where Mercy Fails: Darfur's Struggle to Survive. He is also the senior writer for the humanitarian agency Church World Service.]

World | Documentary delves into players in the dangerous game of oil