Don't use God as 'armor' for waging violence, pope says in Albania 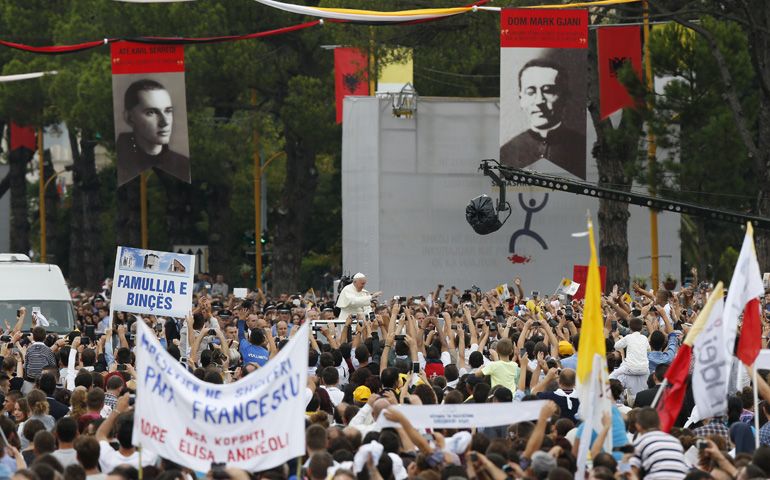 Tirana, Albania — In a world "where an authentic religious spirit is being perverted and where religious differences are being distorted and exploited," Albania is an "aspiring example" to everyone that peaceful coexistence is possible, Pope Francis said during a one-day visit to the country Sunday.

The people of this Balkan nation withstood centuries of Ottoman rule followed by an independence that degenerated into decades of oppressive communist control. The totalitarian regime founded by Enver Hoxha claimed to liberate the people from the constraints of all religions, turning the country into the only atheist nation in the world until the regime's downfall in 1991.

"It promised a paradise without God, but it left instead a hell with no consolation," Archbishop Rrok Mirdita of Tirana told the pope during a Mass attended by an estimated 300,000 people in Mother Teresa Square.

Jubilant crowds lined the main boulevard, many of them Muslims, who make up more than half the country's population.

Large groups of Catholics, who make up about 15 percent of all inhabitants, took buses from other parts of Albania or walked from their homes in Tirana. They were a colorful presence, with some older women in traditional costume, and younger people wearing rosaries or small crosses around their necks.

Some raised banners made out of torn bedsheets, such as one bearing the pope's name and heart symbols painted in the red of the Albanian flag. Crowds on opposite sides of the square engaged in a chanting match, alternating shouts of "Long live Pope Francis" to see who could keep it up the longest.

Security was typical for a foreign papal journey, with streets and rooftops dotted with police and the roads lined with metal barricades partitioning out the popemobile route.

All cellular service, however, was jammed by authorities for several hours as an extra precaution. In the run-up to the trip, Iraq's ambassador to the Holy See had warned that Islamic State terrorists were seeking to kill the pope. But on the day of the visit, the Vatican repeated earlier assurances that there were no "specific threats" to worry about. The pope rode around the square twice in the same open-air jeep he uses at general audiences in Rome.

Earlier in the morning, in an address to Albania's President Bujar Nishani and other dignitaries, the pope called the country a "land of heroes" and a "land of martyrs," whose people stood firm in the face of oppression and persecution.

Rows of large banners bearing black-and-white photographs of Catholics killed during the communist reign hung over the main boulevard, flanked by Vatican and Albanian flags. Out of all the suffering and bloodshed, the pope said, emerged a unique country where "peaceful coexistence and collaboration" exist among Muslims, Catholics, Orthodox Christians and people of no faith at all.

Pope Francis said he wanted his first trip to Europe to trip to highlight Albanians' practice of "respect and mutual trust," saying it was "a beautiful sign for the world."

The pope also warned against manipulating religion, saying no one should "consider themselves to be the 'armor' of God while planning and carrying out acts of violence and oppression."

Before the start of the morning Mass, a large powered paraglider circled and swooped over the main square, the fabric decorated with the national symbol of a black eagle.

The pope used the symbol in his homily, saying God raises his people "up on eagle's wings."

"The eagle soars up high, but it doesn't forget its nest," that is, its past, traditions and values, he said.

"Go up high, fly in the air," while remembering the "great courage and constancy" of the church's martyrs -- bishops, priests, religious and laity who "paid for their fidelity with their lives," he said.

"Don't forget the nest, your history, the wounds, but do not seek revenge," he said. "Go forward in hope."

The pope said he had come to Albania to "thank you for your witness" and encourage people to share the hope in their hearts.

"Where there is youth, there is hope!" he said, noting the large numbers of young people who turned out to welcome him.

At the end of the Mass, before praying the Angelus, the pope told young people to build their future on Christ, saying " 'No' to the idolatry of money, 'no' to the false freedom of individualism, 'no' to addiction and to violence."

He urged them instead to say, " 'Yes' to a culture of encounter and of solidarity, 'yes' to beauty," the good and the true, and to a life lived with enthusiasm and "faithful in little things."

World | Don't use God as 'armor' for waging violence, pope says in Albania

Pope's quotes: Fight for the poor

Times are changing under Pope Francis

Chicago's Cardinal Cupich not expected to be moved to Rome

What Obama should say tonight