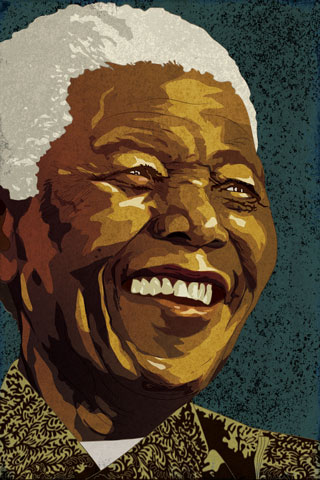 The passing of Nelson Mandela seems to have put the world in a reflective place. He represented -- and lived -- the kind of ideals we hold dear, but rarely reach. He was an intelligent revolutionary who saw great injustices and opposed them, even with his life. He was spared execution, but served 27 years behind prison bars, and miraculously emerged not bitter or seeking revenge. Rather, he came out talking forgiveness and reconciliation. As a national and global leader, he never forgot his origins or left his ideals. When it came time to leave the national stage, he left with grace. He was, in the end, a humble person.

Reflecting on Mandela, it lifts our spirits to recall that the ideals of freedom and equality cannot be contained behind prison bars, and to remember that forgiveness is more than an ideal. It is a practical tool. And it opens a path to reconciliation.

Remembering Mandela, one wants to be a better person.

In early December, the entire world was in mourning. Flags throughout the world, including American cities from coast to coast, private homes and businesses, flew at half-mast. It was all quite exceptional. A collective human reflection on what is good among us. What we might achieve, if only we made a greater effort.

But while we find ourselves in an unusual state of unity in our collective mourning and praise, this was not always the case. It's worth asking why.

The quick response might be that a dead revolutionary isn't going to pick another fight or challenge another injustice, or prod you to think in a new way, a more inclusive way.

There are also other considerations. They require placing yourself in another time.

In the 1980s, Mandela was viewed as a national threat. President Ronald Reagan officially labeled Mandela's African National Congress a "terrorist" group. Mandela was seen as such a threat to the United States that in 1985 then-Congressman Dick Cheney voted against a resolution urging that he be released from jail.

The context was the Cold War and a divided world, communist and capitalist. It was a period in which U.S. foreign policy would go to almost any length, trample any ideal, in its effort to curb communism and secure the American way of life.

U.S. policy came down to this: In the fight against communism, any insurgency within a communist country was a friendly one; any insurgent force in a capitalist country quickly became an enemy. Such thinking led us into fruitless and cruel wars in Southeast Asia and Central America.

South Africa, while ruled by racists determined to stay in power through indiscriminate violence, was a friend in Washington. Mandela and the ANC, threatening the South African status quo, became the enemy -- whatever its ideals.

In turn, Mandela, in his anti-apartheid efforts, found pockets of sympathy within the U.S. among human rights activists and churches -- the National Council of Churches in particular took early, principled stands -- and eventually even business groups. But official Washington would not be moved.

On a national scale, an honest examination of conscience requires asking why American foreign policy too often finds itself aligned with the oppressors and not the liberators. Case after case can be found in Latin America today.

Why, we must ask, did we not, as national policy, embrace the global anti-apartheid struggle? How much do we compromise, no, deny, our national ideals in the name of national security or out of fear of change? Do we allow ourselves to see the world through entirely "nationalistic" eyes? Or through a wider global lens?

Mandela's death can unite us in a recognition that we all can live more generous lives -- and that some people actually do. It should also move us to tear off some of the blinders we seem to live with without much reflection.

When the next call to alleged U.S. patriotism requires us to commit another act of national violence, recall Mandela and this moment and the ideals moving our hearts today, including his embrace of nonviolence. When that moment comes, let's break out of the passing ideology of the time, and risk standing together against that jingoism.

Mandela's ideals should be all our ideals. That's why the world put aside business as usual to mourn together the death of this man. Let's pay respect to his memory by seeing things through a spirit of inclusiveness and generosity. Were this to happen, we'd be a step closer to reflecting in our lives and our nation Mandela's life and vision. That would be a real accomplishment. Help keep the Mandela memory alive.

A version of this story appeared in the Dec 20, 2013-Jan 2, 2014 print issue under the headline: Mandela's ideals should be our ideals.