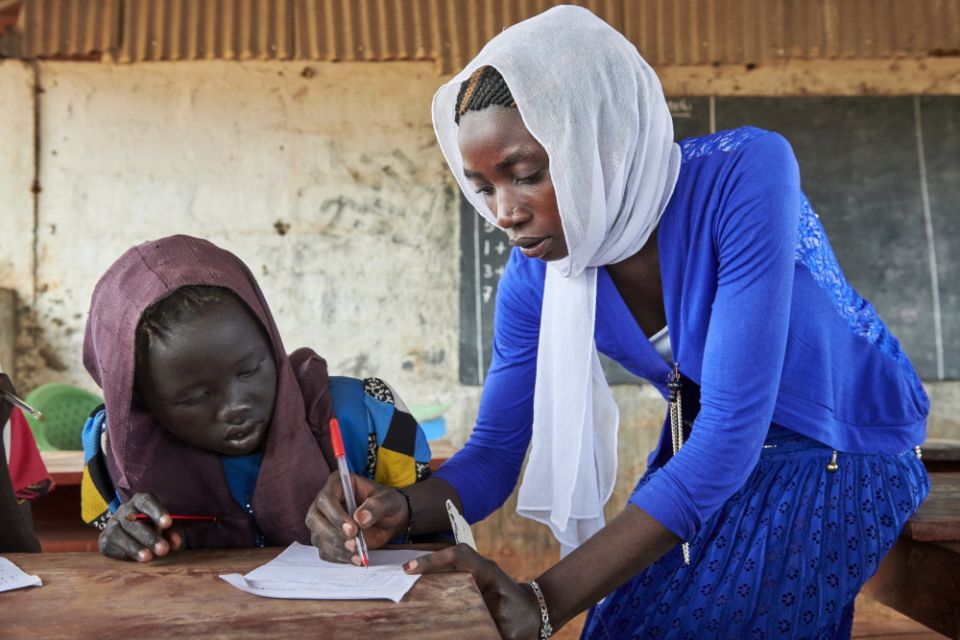 The report, "Her Future: Challenges and Recommendations to Increase Education for Refugee Girls" by Jesuit Refugee Service/USA is based on the observations of JRS workers around the world and especially in refugee communities where they provide educational services.

It points out that although girls' access to education worldwide has received more attention in recent years, refugee girls are still only half as likely to be in enrolled in secondary school as boys.

"In countries affected by conflict, girls are 2.5 times more likely to be out of school than boys," the report notes, adding that girls make up half of the 7.4 million school-age refugees but face "disproportionate challenges in accessing and sustaining their education."

In the primary grades, the student mix of boys and girls is about equal, but this shifts as the students get older when girls drop out at a higher rate than boys.

In some refugee communities, this happens in part because of the social and cultural beliefs about gender roles and education especially when parents believe boys have greater future earning potential and choose to invest limited resources on their son's education over their daughter's.

Some religious or traditional values also discourage girls' education and emphasize a girl's role in the home providing domestic support.

Another factor keeping girls from school: An estimated one in seven girls in developing countries is married before age 15.

In Uganda, which has more than 1 million refugees from South Sudan, JRS runs an education program where dropout rates for girls in both primary and secondary school are high due to families' inability or unwillingness to pay fees, domestic duties at home and early marriage or pregnancies.

The organization based in Washington has addressed this issue in Uganda and in other countries by encouraging greater communication among teachers, administrators, parents and students. It also organizes community programs where school leaders visit refugee settlements, recruit students and talk with families and community leaders about the importance of sending their children to school -- both boys and girls.

It also encourages schools to identify a senior female teacher who can offer counseling services and check in frequently with female students. This outreach allows girls to raise their concerns and helps to create an environment that fosters open dialogue and an opportunity for teachers and administrators to help address any challenges girls may be facing in completing their studies.

One hindrance to education is the targeted attacks on schools and the military use of school buildings. These actions affect all students, but girls can be uniquely targeted, the report points out, not only as victims of sexual violence, but also when armed groups oppose female education.

Another challenge is the lack of access to adequate school buildings and the cost in rural areas just to get their students to school is just too expensive for many families. One solution is school dormitories which particularly helps for girls who don't have to balance home duties with school and also provides a safe place to live and study.

As part of its commitment to girls' education, JRS launched the Global Education Initiative in 2015 with the aim to open its education programs to 250,000 refugee students by 2020 with a focus on increasing girls' access to secondary education.

"Without school," the report says, "a refugee girl is even more unlikely to find success in displacement. It becomes nearly impossible for her to integrate into a new country or reintegrate back in her home country without education, or after a significant gap in education."

It also points out that although the world is now facing the highest levels of forced displacement since World War II, the challenge can be met by "harnessing the potential of refugee children and youth by ensuring that they have access to a quality education."

The report is available online at https://bit.ly/2EU3IXu.