Europe: Not as secular as you think 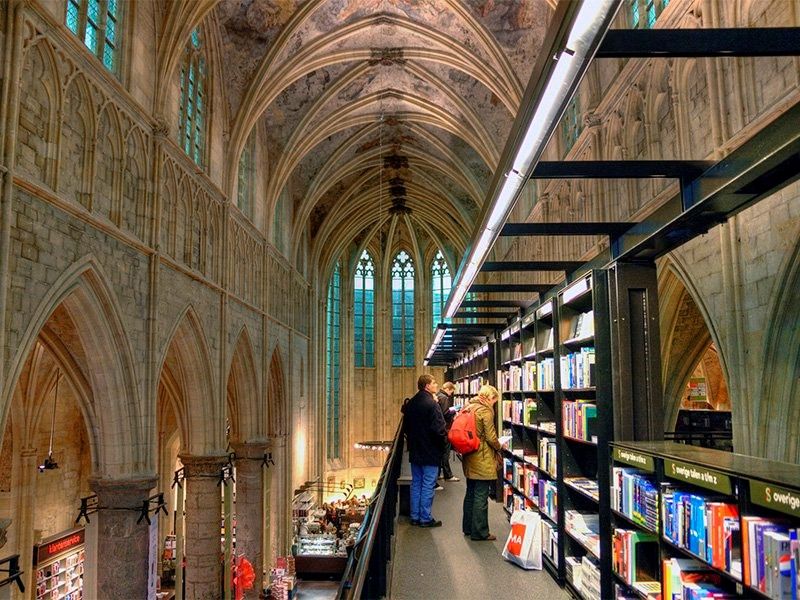 The former church Selexyz Dominicanen has been converted into a bookstore in Maastricht, Netherlands. (Bert Kaufmann/Creative Commons)

Paris — With its dwindling rates of attendance at religious services and rising numbers of churches shuttered or sold, Western Europe seems to be the region of the world where the outlook for faith is bleakest.

Roman Catholicism's Pope Francis was the latest to lament this trend, saying only last week that Western society seemed like "a journey ending in a shipwreck, with the survivors trying to build a raft."

A new survey by the Pew Research Center looks past the headlines that worry the established churches to ask what Western Europeans think about religion. The results, issued Tuesday (May 29), suggest a more nuanced picture.

Despite the region's widespread secularization, 64 percent of the 24,599 adults Pew surveyed in 15 countries still identify as Christians, even if only 18 percent say they attend church at least once a month.

At 46 percent of the total sample, nonpracticing Christians make up the largest single group in the survey, almost double the 24 percent of religiously unaffiliated — atheists, agnostics and "nones" — that often dominate commentaries about the state of Christianity in its erstwhile stronghold.

These nonpracticing Christians have their own mix of religious and social views, sometimes leaning more toward their churchgoing neighbors and sometimes more toward the unaffiliated. These can have political effects as well, for example in the growing debate over Muslim immigration to Europe.

"Christian identity remains a meaningful marker in Western Europe, even among those who seldom go to church. It is not just a 'nominal' identity devoid of practical importance," the survey said.

While religion surveys in Europe have long noticed this large group of nonpracticing Christians, few study them in detail.

French opinion surveys sometimes distinguish between observant and lapsed Catholics because their political views can vary, but those surveys usually don't look closer at the respondents' beliefs. In Germany, the usual distinction is between registered church members and nonmembers, because the system of church taxes makes this an important comparison.

Paul Bickley, head of the political program at Theos, a London think tank that studies the role of religion, said a British census question on religion gives an idea of a group dubbed "census Christians" without further detail about beliefs.

The 2001 census showed a surprisingly large 72 percent of self-identified Christians, but this dropped to 59 percent in the 2011 census.

Bickley agreed in general with the Pew findings but stressed the longer-term perspective that other research in Britain has indicated.

"It's clear that religious identity and practice are both declining," he said. "Also, the nones aren't blanks with no spiritual beliefs at all — a lot is retained, rethought or re-understood. There's complexity beneath any figures like these."

In the Pew survey, about half of the nonpractitioners said they believe in a higher power or spiritual force and another quarter in the God described in the Bible, compared with two-thirds of practicing Christians who have the biblical view of God.

Some 87 percent raise their children as Christians, not that far behind the 97 percent of churchgoers who do so, the 168-page survey said.

About 62 percent agree that churches and religious organizations play an important role in helping the poor, compared with 78 percent of practicing Christians. Even among the unaffiliated, 48 percent agreed on this.

The nonpracticing Christians also appeared closer to the churchgoers on social questions such as immigration and national identity, which have become hot political topics thanks to rising Muslim immigration in recent decades.

About half of all Christians — 48 percent of the nonpracticing and 54 percent of the observant — say their culture is superior to others. Only one-quarter of the unaffiliated agreed with that view.

Similar gaps emerged when the survey asked questions linked to immigration. Some 45 percent of the nonpracticing Christians said Islam was not compatible with European values, against 32 percent among the unaffiliated.

"Both church-attending and non-practicing Christians are more likely than religiously unaffiliated adults in Western Europe to voice anti-immigrant and anti-minority views," the survey remarked.

The survey did not hazard an explanation for this but did quote French Islam expert Olivier Roy as saying that traditional organized Christianity had "faded away in favor of a cultural marker which is more and more turning into a neo-ethnic marker ('true' Europeans versus 'migrants.')"

Drilling down into the numbers, the survey found that Catholics were more likely than Protestants to have negative views of Muslims.

While geography may play some part in that since southern Europe is more heavily Catholic and the north more Protestant, the survey said the overall pattern is evident in countries with large groups from both denominations, such as Britain and Germany.

The survey stressed its results did not mean most Christians opposed Muslim immigration and pointed out that churches helped to resettle refugees.

On social issues, around four-fifths of the nonpracticing Christians agreed with the 87 percent of unaffiliated who support abortion and gay marriage. A majority of churchgoers also approved, but at 52 percent and 58 percent respectively.

The survey had some interesting comparisons between Western Europe and the United States. They have roughly similar levels both of self-identification as Christian (64 percent for Western Europeans and 71 percent for Americans) and of the religiously unaffiliated status (about 24 percent).

But Americans are far more likely than West Europeans — by 53 percent versus 11 percent — to say that religion plays an important part in their lives.

Even the religiously unaffiliated in the U.S. see faith as more important than their counterparts across the Atlantic, to the point where American nones sometimes emerge as more religious than Christians in several European countries when asked about belief in God, prayer and attendance at religious services, it said.

The share of nones varies considerably across Western Europe, ranging as high as 48 percent of the adult population in the Netherlands and as low as 15 percent in Ireland, Italy and Portugal.

The survey was conducted between April and August of last year.

It said it showed higher shares for religiously affiliated people than the widely used European Social Survey because Pew only asked respondents what if any religion they followed whereas the ESS asked first if they belonged to a faith and if so which one.

World | Europe: Not as secular as you think

The Center lends help in heart of Hollywood