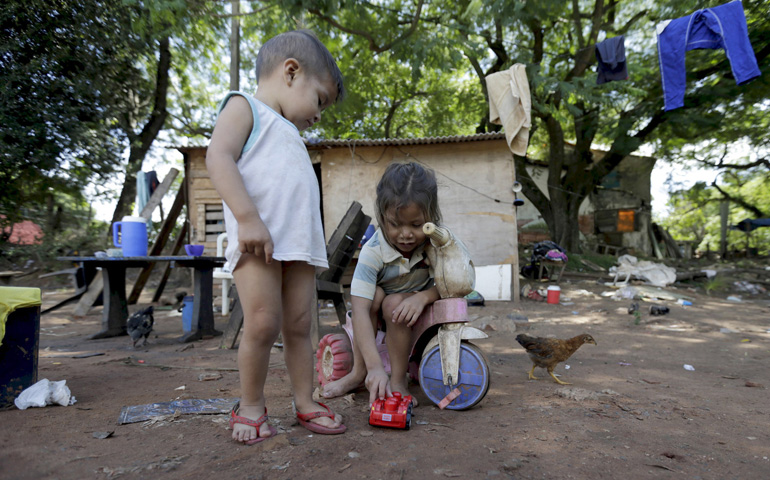 Children play outside their house March 31 in a slum in Asuncion, Paraguay. (CNS/Reuters/Jorge Adorno)

With extreme poverty having been cut in half over the last generation -- and the Millennium Development Goals target of poverty halving having been achieved five years ahead of the 2015 deadline -- veterans of the global war on poverty believe it is possible that extreme poverty can be wiped out in the next 15 years.

It will be a tall order because an estimated 1 billion people still live in extreme poverty, defined as living on less than $1.25 a day.

But "progress is possible everywhere," declared Alex Thier, a U.S. Agency for International Development official who has spent half of his life in the world's poverty zones, during a forum Tuesday at The Catholic University of America.

The forum, "Ending Extreme Poverty Now: Working Together With the Poor," was co-sponsored by the university and USAID, along with Catholic Relief Services, Catholic Charities USA, the Africa Faith and Justice Network, and the U.S. Conference of Catholic Bishops.

"We live in a world of evident inequality," Thier said. He pointed to the 2010 earthquake in Haiti, which the Haitian government said killed more than 300,000 people, and an even stronger quake six weeks later in Chile that killed just 526 people. The difference? "Chile didn't figure out how to end earthquakes," Thier said. "Chile became resilient. Haiti did not."

Another example he offered were the countries of South Korea and Congo, both of which were considered desperately poor in 1953. Today, South Korea's economy and people thrive, while Congo's "suffered such economic mismanagement they are demonstrably worse today than they were 55 years ago" despite sitting on some of the world's most-sought-after natural resources, Thier said.

In an interview with Catholic News Service after his remarks, Thier said "a little resources can go a long way" if people establish good governance procedures and exercise oversight over the funds given them.

The best surefire investment that can be made in extremely poor communities is "education, especially girls' education," Thier told CNS. "There's never a bad investment in a child learning," he said. "It just pays onwards and onwards."

"Can we get to zero [poverty]?" Thier asked the audience. "The path is not foreordained." Labor unions, church groups, women's collectives and environmentalists' clubs in poverty-stricken regions, among other organizations, must work jointly on poverty-eradicating initiatives.

But Thier pointed to successes with milk production eastern Pakistan, infant mortality in Nepal, property tax payments via cellphone in the Philippines, and improved Ebola suits in western Africa to demonstrate that poverty can be bested.

Archbishop Bernardito Auza, the Vatican's permanent representative to the United Nations and former papal nuncio to Haiti, pointed to the next round of poverty-reduction goals he expected the U.N. to approve in September -- just around the time of Pope Francis' visit to the world body.

Among those goals are ending poverty in 15 years, ending hunger via improved nutrition and sustainable agriculture, improved delivery of public health services, basic public education for all, mitigating climate change -- "what we Catholics call creation care," the archbishop said -- and promoting peaceful institutions and societies.

The countries currently torn by civil strife, Auza said, are those that have not met the Millennium Development Goals "or have even regressed."

Thier told CNS that one revolutionary development common today that he did not have for his first overseas aid trip to eastern Afghanistan 23 years ago was that "you can land at an airport and access email with your cellphone."

Acknowledging the information revolution that has taken place in her lifetime during a panel discussion at the forum, Catholic University sophomore politics major Anne St. Amant said people her age are more connected than any past generation thanks to social media.

"How do we turn those tweets and how do we turn the Facebook statuses into action?" she asked. "We need to help each other," she added, pointing to the older people on the panel. "We have to stand in solidarity. We go to the elders."