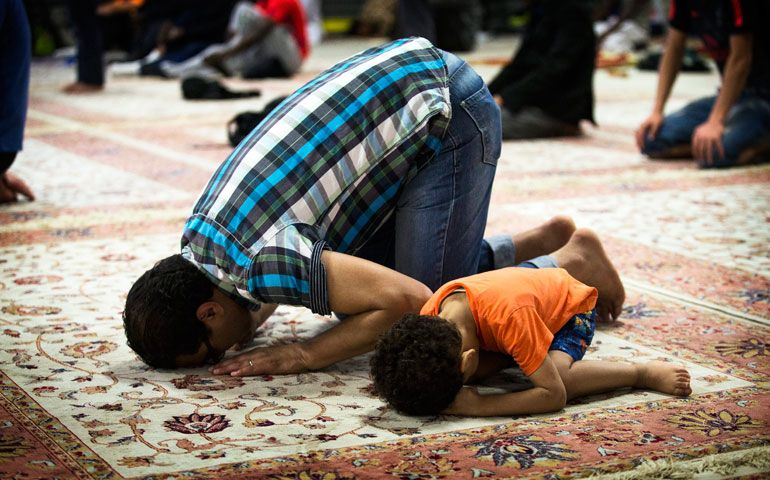 A father and son pray at the Muslim Sociocultural Institute in Paris in June. (Newscom/EPA/Etienne Laurent)

Paris — After the massacres at the satirical magazine Charlie Hebdo and at the Hypercacher market, and the huge demonstrations of Jan. 11 that followed, France fell silent. It was as if these ominous events were too hard to cope with and explain in a rational fashion. The usually talkative newspapers and magazines went strangely quiet.

This silence was broken in a spectacular way by a highly controversial book published in May that climbed to the top of the best-sellers list. The book's title, Who Is Charlie: Sociology of a Religious Crisis (my translation), signaled its intent as an in-depth study of a complex story. The author, Emmanuel Todd, is a historian and demographer who made himself famous in the early '80s by accurately predicting the downfall of the Soviet Empire.

In Who Is Charlie, Todd has stated some unwelcome truths, using all the available data. He signaled that the millions of demonstrators came from a fairly narrow section of the French population: white and middle- or upper-class.

Considering that the largest demonstrations took place in the west of France where the Catholic influence is still dominant, Todd stressed that Catholic culture played an important, if unconscious, part in the public outrage. According to his view, this public reaction reflected a marked anti-Islamic bias, a kind of transfer for Catholic-educated people from old anti-Semitism to a rejection of the Muslim creed.

This transfer was made in spite of the fact that the Muslims are a fairly powerless minority, just 10 percent of the French population. In an aside, Todd noted that the strongest anti-Semitic current of the country was found in the Arabic community.

Needless to say, the book was bitterly criticized by noted Paris figures, including journalists and academics, who adamantly argued that the main motive of the protesters was the defense of the freedom of speech.

The church was careful to keep away from these polemics. Its main spokesman, Paris Cardinal André Vingt-Trois, insisted on the necessity for the three main religions of France to work in harmony and fight intolerance and fanaticism.

One may disagree with some of Todd's statements. The author sometimes sounds like a maverick who enjoys being provocative. Yet if one considers the situation of France and Europe, one must admit he has a point.

The post-Charlie demonstrations cannot be reduced to a righteous reaction to the attacks against journalists and Jews. They reveal a broader fracture that spreads through many other countries, such as the United Kingdom, Belgium and Denmark.

French society, which has been for many centuries under the overpowering influence of the Catholic church, has to face a completely new situation. While the role of the church is fading rapidly -- with less than 10 percent of the population attending Mass -- a new religious minority, Islam, is growing and playing an important part in the suburbs of Paris and other large cities.

Even more worrying, this community includes a small fraction of out-of-control Islamists well-connected to the world jihadist network. What is also striking is that, according to the French Home Ministry, about 20 percent of the young people who go to fight in Syria are converts with a Christian background.

The solution to this quandary is both political and religious. The government will have to forget, for a while, the rigid rules of separation of church and state and help Muslims to build their mosques and educate their imams.

The Christian confessions and, in France, the Catholic church have to rethink their message and their appeal to a population that has never been so diverse. The statements of bishops such as Vingt-Trois or Lyon Cardinal Philippe Barbarin show the uneasy position of the church. It must stay open to a dialogue with Muslims and pursue efforts to work with them. That Paris Catholic University opened several years ago with a department to educate imams is a good example of this partnership.

And yet the church has its own priorities. It cannot give up its mission to teach the Gospel and save its identity.

The immense prestige of Pope Francis in France and in Europe is a source of hope and offers new opportunities. When he was bishop of Buenos Aires, Argentina, Francis showed how to work fruitfully with Jews and Muslims, and now the pope delivers these lessons to the world. Moreover, his attraction to believers and nonbelievers is a great help to French Catholics who are trying to keep a dialogue with a fractured population that is forgetting its Christian roots.

[Antoine de Tarlé lives in Paris and is a regular contributor to the French Jesuit review Études.]

Push for reform grows in Austria

Latinos may be key to California recall. How will Latino Catholics vote?

Dr. Paul Farmer, aka 'kenosis man,' emptied himself in love and service to others