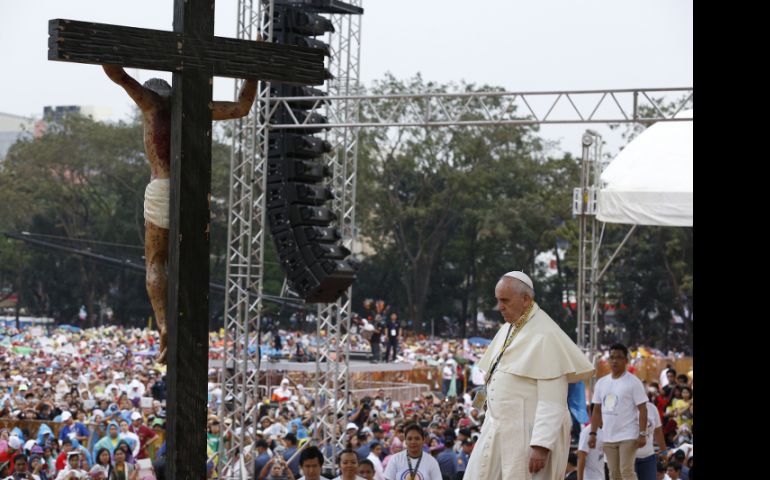 Pope Francis walks forward to reverence a crucifix during a meeting with young people at the University of St. Thomas in Manila, Philippines, Jan. 18. (CNS photo/Paul Haring)
This article appears in the Francis in the Philippines feature series. View the full series.

Manila, Philippines — Tearfully recounting a young life as yet spent forced to forage for food from garbage and to sleep outside on cardboard mats, 12-year-old Glyzelle Palomar had a simple but profound question for Pope Francis.

"Why did God let this happen to us?" the young Filipino asked, covering her face with her hands as she sobbed.

Speaking on a stage in front of some 30,000 young people as part of a meeting between Francis and Filipino youth Sunday, Palomar's intense query visibly affected the pontiff.

Putting aside a text he had prepared for the occasion in order to respond directly to the young woman, Francis answered her with a 40-minute reflection on the nature of suffering, love, and service.

"The nucleus of your question almost doesn't have a reply," the pontiff said at first, pain clearly etched on his face as he mentioned that he had seen her tears.

"Only when we too can cry about the things that you said are we able to come close to replying to that question," Francis continued.

"Certain realties in life we only see through eyes that are cleansed through our tears," Francis said.

Addressing the thousands of youth in the crowd, he continued: "I invite each one of you to ask yourselves: 'Have I learned how to weep, how to cry when I see a hungry child, a child on the street who uses drugs, a homeless child, an abandoned child, an abused child, a child that society uses as a slave?'"

"Let us learn how to weep, as she has shown us today," said Francis. "Let us not forget this lesson. The great question of why so many children suffer. She did this crying. And the response that we can make today is let us learn, really learn, how to weep."

Francis' remarks Sunday came in a meeting with Filipino youth organized as part of his visit to the country Thursday-Sunday and held at Manila's Dominican-run University of Santo Tomas.

Palomar was one of four young people who gave testimonies about their lives during the event. Rescued from living on the streets by a foundation in Manila dedicated to helping such children, she and a young man helped by the same foundation spoke of the intense poverty faced by many Filipino children.

A nation of some 100 million, more than one-quarter of the population of the Philippines is estimated to live below the poverty line. A 2009 study by the Philippine Institute for Development Studies found that 36 percent of Filipino children live in impoverished conditions.

In answering Palomar, Francis also said that Jesus cried often in the stories of the Gospel.

"If you don't learn how to cry, you can't be good Christians," said the pope. "This is a challenge."

Francis spoke extemporaneously Sunday in his native Spanish, with the help of a priest translating his remarks into English for the crowd.

Beginning his talk, Francis first asked the youth at the meeting to offer prayers for the young woman who died at the end of a Mass the pontiff celebrated Saturday in Tacloban, an area about 500 miles southeast of Manila.

Kristel Pasadas, a 27-year-old staff member for Catholic Relief Services, was killed when scaffolding holding a speaker used for the amplification system during the Mass fell on her.

"I have very sad news today," the pope said Sunday, before asking that those assembled take a minute of silence in prayer. "Let us also pray for her father and mother," Francis added. "She was the only daughter."

Francis then addressed the fact that besides Palomar those that gave testimonies at the youth event were young men.

There was "only a very small representation of women among you," he said, adding: "too little."

"Women have much to tell us in today's society," the pope continued. "Sometimes we are too machista ... and we don't allow room for the women."

"When the next pope comes, please more women among the number!" he asked.

The pope then addressed two other testimonies given by young men at the event, one focusing on the struggles young people face becoming overloaded with information in the internet age and the other speaking about volunteering to help survivors of 2013's Typhoon Haiyan.

Addressing the first testimony, Francis said there is so much information available now "but perhaps we don't know what to do with that information."

"We run the risk of becoming museums of young people, that have everything but without knowing what to do with it," he said.

The pontiff then said that in order to love, one has to use three languages: Of the mind, of the heart, and of the hands.

"What you think you must feel and put into effect," he continued. "Your information comes down to your heart and you realize it in real works."

Francis then said that love also requires being open to being loved and to surprises.

"Don't be frightened of surprises," he told the youth. "They shake the ground from underneath your feet and they make us unsure, but they move us forward in the right direction."

Reflecting on the example of St. Francis of Assisi -- who he said "died with empty pockets but with a very full heart" -- the pope said that "real love leads you to spend yourselves in life, to leave your pockets empty."

Responding to the man who volunteered after the Typhoon, one of the most devastating ever experienced in the Philippines, Francis told the young people they must not only learn to give of themselves but to receive from others.

"Jesus had to come to allow himself to feel compassion, to be loved," said the pope. "How many young people are there like this? You know how to give and yet you haven't yet learned how to receive."

"You lack only one thing, to become a beggar," he continued. "This is what you lack, to learn how to beg."

"To learn how to receive with humility," said Francis. "To learn to be evangelized by the poor, those that we help: The poor, the sick, the orphans, they have so much to offer us. Have I learned how to beg also for that?"

"Do you let yourselves be evangelized by those you serve?" he asked. "Or do I feel self-sufficient or I'm only going to offer something and think that you have no need of anything?"

Francis is visiting the Philippines, Asia's largest Catholic nation, Thursday-Sunday in the second visit of a two-part Asian voyage that first saw him visit Sri Lanka earlier in the week.

Later Sunday the pontiff will celebrate a public Mass in Manila's Rizal Park, an event the Vatican has called a "mega Mass" because of the expected crowds. Millions have converged since early Sunday morning on the streets of Manila, under pouring rain, to try and secure a place in the celebration.

In one sign of the massive operation to prepare for the event, officials from the Catholic Bishops’ Conference of the Philippines on Saturday night celebrated a Mass and consecrated 2.5 million hosts for distribution Sunday from 20 tents among the crowd.

As Francis traveled the some four miles Sunday between Manila's apostolic nunciature, where he has been staying during his visit, and the university for the youth meeting, crowds pressed in along the route, with some people coming so close as to almost touch the pope's hand.

Police were lined shoulder to shoulder along barricades lining the road, attempting to hold the crowd in.