In Holy Land, it's 'I am Christian'; denominations aren't so important 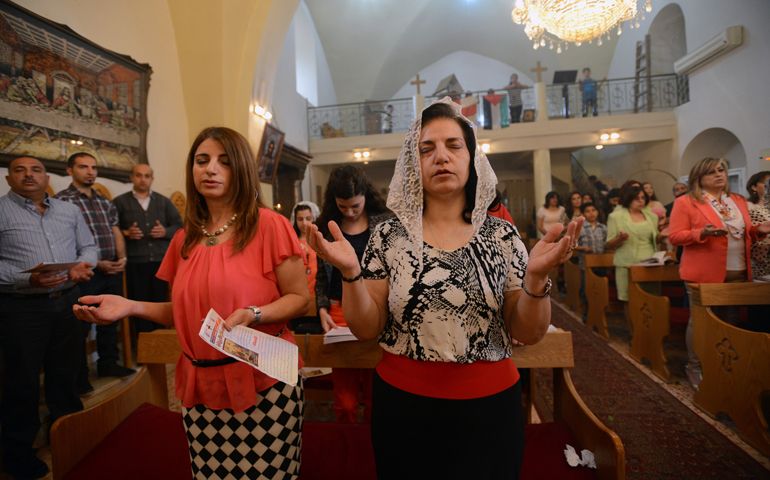 Jifna, West Bank — Suheir Saliba was running late as she prepared to go to the Easter Divine Liturgy with her husband, Aimad Kamal, and his family.

Saliba, a Catholic, had a late night. She, along with other Catholic and Greek Orthodox residents of the village, had attended the ceremony welcoming the holy fire at St. George Greek Orthodox Church.

Saliba joined her mother and brother and his family at Mass Holy Saturday in the Catholic church where she was raised. Some of the Greek Orthodox parishioners stayed for the Mass, too. Saliba and her family went out to eat afterward, and she did not return home until late.

Easter was the day to spend with her husband's family.

In Israel and the Palestinian territories, where Christians make up a little less than 2 percent of the population, it is difficult to find a family where there is no "intermarriage" between people from different Christian denominations. In Palestinian tradition, the women join their husband's church after marriage, raising their children in that church, but most women also continue to attend religious ceremonies in the church where they were raised.

On an international level, relations between Catholics and Orthodox have not always been so positively familial. In fact, it was only 50 years ago that Pope Paul VI and Ecumenical Orthodox Patriarch Athenagoras of Constantinople met in Jerusalem and launched a new relationship marked by forgiveness and dialogue. Pope Francis originally planned his May 24-26 trip to the Holy Land to commemorate the 50th anniversary at the invitation of Ecumenical Patriarch Bartholomew, whom he will meet May 25.

Saliba's mother was raised Greek Orthodox, but married her father, who was a Catholic. Two of her maternal uncles belong to the tiny Seventh-day Adventist church, and a third uncle is Lutheran.

"For me, it doesn't matter where I pray, I am attending God's house. How the prayers are said does not matter," she said. On Sundays, she attends Mass with her mother at the Catholic church and for holidays and special ceremonies she goes with her husband to the Greek Orthodox church. She said sometimes it is difficult to follow the Orthodox prayers, so she simply prays in her heart.

Though Saliba's son, 12-year-old Fadi, has been baptized in the Greek Orthodox church, he feels equally comfortable in the Catholic church, and his parents will allow him to choose which church he wishes to attend when he gets older, Saliba said.

Kamal said in the older generation, the different denominations preferred to marry within their own churches, but today, nobody differentiates.

"I am Greek Orthodox, but I don't care. Sometimes I go to Catholic Mass," he said. "Everyone is praying to the one God. I just go to pray."

Bishop William Shomali, chancellor of the Latin Patriarchate of Jerusalem, said while Greek Orthodox priests are not permitted to concelebrate Mass at a Catholic church, they are often present at Catholic religious ceremonies as a sign of unity.

Fuad Farah, a Greek Orthodox community elder in Nazareth, Israel, said the different affiliations are a non-issue, and nobody even ever thinks about it. He used his own family as an example: While he belongs to the Greek Orthodox church, his wife is a Protestant, and two of his daughters are married to Catholics.

"We (Christians) are a small minority and there are too many denominations," he said. "There is no problem for us. Sometimes (when the holiday dates are different) we celebrate them once, sometimes we celebrate them twice. We are the most interdenominational community in the world."

Kamal said in West Bank villages, Christians celebrate Christmas according to the date of the Latin-rite Catholics' Gregorian calendar and Easter on the date it falls on the Julian calendar used by the Greek Orthodox. This year, the date for Easter coincided on the Catholic and Greek Orthodox calendars, and Holy Land church leaders have decided that beginning next year, they always will celebrate Easter on the same date.

During Holy Week, Fr. Yacoub Rafidi, a Catholic native of Jifna who was raised Greek Orthodox, helped out at Holy Family Catholic Parish in Ramallah, West Bank. He studied at the Latin Patriarchate seminary in Beit Jalla and served for 16 years as parish priest in various parishes in Jordan. He is currently studying in Rome and was home for the holidays.

His mother is a Catholic, he said, and he attended the Catholic parish school, largely because there was no Greek Orthodox school. He was strongly influenced by the parish priest, and he said his path led to the vocation of priesthood in the Catholic church. His Greek Orthodox father was happy that his son was happy, and now the family follows the Catholic tradition. In Rafidi's family there are both Catholic and Greek Orthodox priests, he noted.

Rafidi estimated that almost one-quarter of the students at the Latin Patriarchate seminary have come from Greek Orthodox families. He attributes this to the fact that there are very few Greek Orthodox schools in the area, while every Catholic parish has a parish school attached. In addition, he said, the Greek Orthodox hierarchy is largely Greek. He said the local Orthodox priests are encouraged to marry -- as permitted in the church, although they then cannot become bishops. There is a big division between the local church and the Greek leaders, he said, whereas the Catholic church historically has worked to create a local-led church.

Many Christians have left the Holy Land because of the political difficulties incurred from the Israeli occupation, he said, and those who are left share a feeling of family, with the Greek Orthodox being the largest church, followed by the Catholics.

"The people here don't say 'I am Catholic' or 'I am Greek Orthodox.' They say 'I am Christian,' " he said. "Inside this family we have good relations. To be a part of a family is very important, the family of Christians."

World | In Holy Land, it's 'I am Christian'; denominations aren't so important