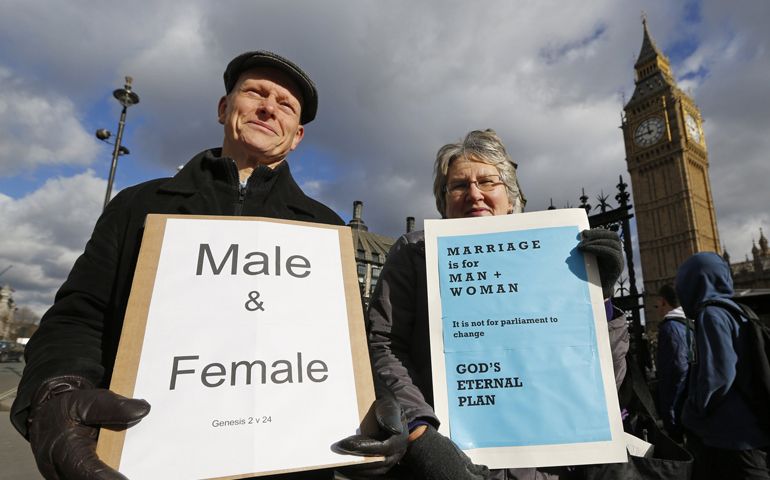 Christian activists Jonathan Longstaff and Jenny Rose, both from London, protest outside Parliament before a vote on same-sex marriage Tuesday in London. (CNS/Reuters/Chris Helgren)

The vote followed six hours of debate and represented the first time lawmakers were able to vote on the redefinition of marriage to include same-sex couples.

The bill will now be scrutinized in committee before having a third reading in the House of Commons and must also pass through the House of Lords before it would become law later this year.

The Catholic church has campaigned against the bill, which is also strongly opposed by the Church of England, the mainstream Protestant denominations and by Jewish, Muslim and Sikh leaders.

The Catholic bishops have directly warned lawmakers that the proposals will destabilize marriage, harm the well-being of children, jeopardize religious liberty and undermine the ability of the church to function effectively in civil society.

But introducing the second reading debate Tuesday, Culture Secretary Maria Miller promised Parliament the bill would not pose a threat to religious freedom.

"It would be deeply divisive if, in righting a wrong for some, we created a wrong for others," she said.

"No teacher will be required to promote or endorse views that go against their beliefs," she said. "No hospital chaplain or worker will have to believe in a new definition of marriage. No religious organization will have to conduct same-sex weddings.

"It is about fairness and it's about giving those who want to get married the opportunity to do so while protecting those who don't agree with same-sex marriage," she said.

Prime Minister David Cameron depended on the support of the opposition Labor Party as a majority of his Conservative Party members -- 139 -- voted against the bill, while 132 voted in favor.

Yvette Cooper, Labor Shadow Minister for Women and Equalities, praised the bill and told the House of Commons that no religious group "owns marriage."

Cooper also argued that Britain should legalize same-sex marriage "because other countries are doing it."

"France just last week passed the first vote on the way to same-sex marriage, and the president of the United States of America is in favor of equal marriage," she said.

However, some politicians criticized the legislation, claiming the government was incapable of guaranteeing freedom of conscience for people who disagreed with the redefinition of marriage.

"The government cannot possibly guarantee protection for churches or individuals with a traditional view because it cannot control or predict what will happen in the courts," said Jim Dobbin, a Labor politician from Manchester and a Catholic.

He said the closure or secularization of Catholic adoption agencies that could not assess same-sex couples under equality laws introduced in 2007 "was a good example" of how Parliament was not able to control the interpretation of laws it introduced.

"Changing the definition of an institution that has served society well is hasty and destructive," he said.

Edward Leigh, a Conservative politician and also a Catholic, told the debate that heterosexual marriage has been considered important throughout history because it is the best environment in which to raise children.

He said the procreative potential of heterosexual marriage was the characteristic that gave it a recognized status in law -- and this could not apply to homosexual couples.

"The reason why marriage is underpinned by laws and customs is because children usually result from it," Leigh said. "They need protecting from the tendency of adults to break their ties and cast off their responsibilities."

Earlier Tuesday, Bishop Philip Egan of Portsmouth, who had written to the prime minister in December asking him to drop the bill, posted a statement on his diocesan website, warning of "catastrophic consequences" for family life in Britain if the bill became law.

"In future the Catholic view of matrimony will differ markedly from what society calls marriage," he said, adding that the church may eventually "be forced to withdraw from the civil registration of marriages."

He also suggested that Catholics "who work in the medical profession and in social services are going to find themselves under intolerable moral pressures."

"These pressures will also arguably be felt throughout our Catholic schools, by teachers, staff and parents," Egan said.