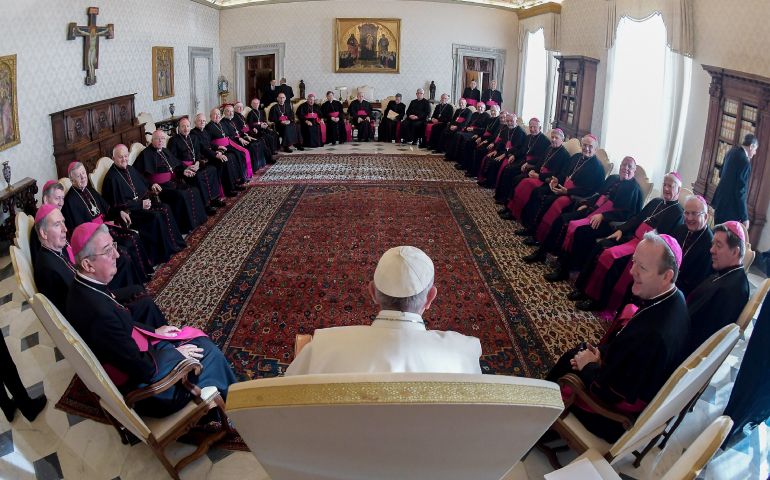 Dublin — When up to 30 Irish bishops met Pope Francis in Rome in January on their first ad limina visit in 10 years, the president of the Irish Bishops Conference availed of the opportunity to renew its invitation to the pope to visit Ireland for the World Meeting of Families in August 2018.

"We promise you, as we say in Ireland, 'céad míle fáilte' — 100,000 welcomes!" Archbishop Eamon Martin of Armagh assured the pope.

While Martin knows the Irish church can deliver a turnout of 100,000 for a papal visit, anything beyond that figure is not guaranteed, such is the flux within Irish Catholicism today.

"So much has changed for church and society in Ireland" since the Irish bishops last gathered for an ad limina visit with Pope Benedict XVI in 2006, Martin acknowledged in his formal address to Francis Jan. 20 at the Vatican. While the pastoral care of marriage and the family remains a priority, he stressed, the fact is Ireland has undergone something of a social and sexual earthquake in the past two decades, culminating in the 2015 referendum to redefine marriage. This former stalwart of the Catholic stable was the first country in the world to introduce same-sex marriage via a popular vote of the people.

The overdue ad limina visit was undoubtedly linked to all that is happening in Ireland, including a spate of clerical abuse reports, a spat between church and state which saw the Irish embassy to the Vatican shut down in 2011 (and subsequently re-open as a scaled down mission in 2014), and the introduction of a raft of "progressive" measures including legislation legalizing abortion for the very first time.

In their two-hour meeting with Francis, the Irish bishops expressed "serious concern" over the "sharp decline in faith practice" and the steep decline in religious vocations. In tandem with these trends, is the frustration of women, the backbone of the Irish church, at their inferior place and the visceral anger of many over the clerical abuse scandals.

Theologian Fr. Gerry O'Hanlon, in an article for La Civiltà Cattolica, summed up the Irish church's challenge of trying to re-awaken the need for salvation and the Good News within a cultural reality where God is increasingly "missing but not missed." According to the Jesuit, Irish culture is "betimes indifferent and hostile to Christianity and, in particular, to the institution of the Catholic church."

After the meeting with Francis, Archbishop Diarmuid Martin of Dublin and Bishop Fintan Monahan of Killaloe, both recalled how Francis compared the role of the bishop to a goalkeeper who must be ready to deal with shots from wherever they come from.

Francis opened the conversation with the Irish prelates by "throwing in the ball," telling them he had no agenda but wanted to hear and learn about the Irish church.

"He insisted that we would not speak in any order and that our comments and criticism would be welcome also," Monahan said.

Monahan, the youngest of a cohort of new episcopal appointments made by papal nuncio Archbishop Charles Brown since his appointment by Benedict in 2011, recalled how in their "conversation" with Francis, the Irish delegation discussed, "The difficult circumstances of many clergy in Ireland, the increasing work-load and pressure they are under with declining numbers of priests."

In his address to the pope, Eamon Martin described the "well-being of our priests" as "dear to all of us bishops."

"We are aware that declining numbers of priests, their increased workload and ever more challenging pastoral situations, which has taken its toll on them," he said. "We thank God today for their resilience, dedication and generosity, and for the kindness and support of the faithful."

The pope impressed upon the prelates that the relationship of a bishop with his priests should be one of "closeness" like that of a father and his son. Perhaps a hint from Francis that the fractured relationships between bishops and many priests in Ireland need to be healed if the church is to move towards renewal.

But while Francis was telling the bishops he wanted to hear their problems and criticisms, back in Ireland, the Association of Catholic Priests (ACP), which has a membership of over 1,000 priests, issued a statement expressing themselves as "disappointed, frustrated and angry" that, after six years of attempting to engage the bishops in a "respectful and mutual consideration of issues central to the health and well-being of the Irish Catholic church," the bishops had "pulled the plug on any future engagement with the ACP."

Hitting out at the Irish hierarchy's "attempted side-lining of our influence and the diminishment of our role," the association described it as "unconscionable and irresponsible, in present circumstances, to still the voice of an association that represents over a third of Irish priests who are prepared to name important and difficult truths at a critical time for the Irish church."

The priests' must have contrasted their treatment by their bishops with Francis' more open attitude to hearing unpalatable truths and criticisms in Rome.

There, Eamon Martin sought to highlight the green shoots of renewal he has detected within the Irish church, but this prompted the Association of Catholic Priests to accuse the bishops of presenting "a public relations gloss on the condition of the Irish church, rather than a truthful presentation of our difficulties."

When the discussion with Francis moved on to the issue of young people, the pope underlined the importance of listening carefully to young people. He encouraged the bishops to adopt what he termed "the apostolate of the ear" and to be constantly available to listen and encourage young people and keep them on board in different aspects of faith practice.

Perhaps this "apostolate of the ear" is what is needed by the Irish church in order to get all sides communicating. "The crisis is so grave that we need 'all hands on deck,' " O'Hanlon wrote. "We need to come together to tap into all the resources available — clerical and lay — to find a way forward."

In his article for La Civiltà Cattolica, O'Hanlon, a former provincial of the Jesuits in Ireland, suggested that in the context of the "almost hysterically aggressive attitude towards the church" where episcopal and ecclesial authority and reputation were fatally damaged among a large segment of the population by the revelations of various clerical abuse scandals, Irish Catholicism runs the risk of becoming cultural Catholicism, devoid of personal conviction. Mass attendance has declined from 91 percent in 1971 to 35 percent in 2012. The bishops admitted in their response to the synod of bishops on the family questionnaire that increasing numbers of the faithful have difficulty with Catholic teaching in areas of sexuality and gender.

O'Hanlon called for a synodal church at all levels — papacy exercised in collegiality with fellow bishops, diocesan commissions, councils and regular synods appropriately representative of all the baptized, and parishes with representative parish councils. The experience of the diocesan synod in Limerick would indicate that such openness helps rebuild trust and enthusiasm among the faithful.

One of the first indications that the bishops may be beginning to shift came on Feb. 2 when Diarmuid Martin told RTE Radio that the matter of the six Irish priests disciplined by the Vatican had been raised in the ad limina visit. The archbishop also had strong words on the importance of the church being more inclusive towards women and he admitted that the church in Ireland has "until very recently" been "a very clerical church" and it was emerging from this "very slowly."

The next time the Irish bishops meet Francis will be in Ireland in August 2018 for the World Meeting of Families, the first papal visit since Pope John Paul II wooed this small country in 1979. What kind of church and how much of a welcome will greet Francis will depend on the bishops' leadership.

The Irish church "desperately" needs "charismatic leaders and we just haven't any — none of the bishops stands out; none of the bishops is a Francis character," censured Redemptorist Fr. Tony Flannery said in his Jan. 29 interview with RTE Radio. "I'm talking about somebody who has warmth and radiates that warmth to people … who is a welcoming person and an open person. We are in desperate need of people like that to lift the spirit of the Irish church."

[Sarah Mac Donald is a freelance reporter based in Dublin.]

Vatican announces deal with China over appointment of Catholic bishops

European church gears up for battle at Vatican's family synod