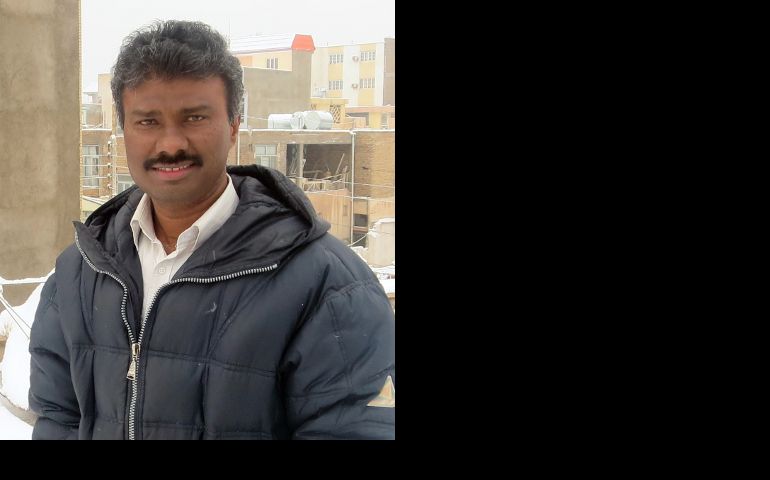 Jesuit Father Alexis Prem Kumar of India was kidnapped June 2 as he was leaving a school serving children recently returned to Afghanistan after living as refugees in Iran or Pakistan. (CNS/courtesy JRS)

Rome — A Jesuit priest from India was kidnapped June 2 as he was leaving a school serving children who were recently returned to Afghanistan after living as refugees in Iran or Pakistan.

The Rome headquarters of the Jesuit Refugee Service confirmed that its Afghanistan country director, Jesuit Fr. Alexis Prem Kumar, "was abducted by a group of unidentified men" as he was leaving a JRS-supported school for returnee refugees in Sohadat village, about 15 miles from the city of Herat in western Afghanistan.

"We are deeply shocked by Prem's abduction. We are in contact with all the relevant authorities and doing everything possible to ensure his safe and speedy return," said Jesuit Fr. Peter Balleis, international director of JRS.

Church officials in India expressed concern for the safety of Prem Kumar, 47, who has worked in Afghanistan since 2011.

"We are worried and concerned about the kidnap of Fr. Alexis," Fr. Edward Muduvassery, Jesuit provincial for South Asia, told Catholic News Service June 3 from his office in New Delhi.

Fr. Joseph Chinnayan, deputy secretary-general of the Catholic Bishops Conference of India, appealed to the Indian government to quickly to seek the Jesuit's release.

No group has yet claimed responsibility for the abduction, Muduvassery said.

"We are keeping our fingers crossed and very much concerned about the wellbeing of Fr. (Prem Kumar)," he said.

Before moving to Afghanistan, Prem Kumar worked for JRS for 12 years, serving Sri Lankan refugees living in the southern Indian state of Tamil Nadu, his home. He was director of JRS in India from June 2005 to May 2011 and then moved to Afghanistan.

"The kidnapping follows the thwarted attack (May 23) on the Indian consulate in Herat by four armed gunmen who were killed by security guards," the JRS press statement said.

When asked whether the kidnapping is linked to recent attacks on Indian targets by Taliban forces, Muduvassery said, "We cannot speculate on anything."

"We have no clue so far regarding the kidnappers as there has been no ransom or other calls," he added.

The JRS statement said no additional comment would be made until the case is resolved.

Jesuit Fr. Giuseppe Moretti, superior of the Jesuit mission in Afghanistan, told the Vatican's Fides news agency June 3 that "the kidnapping of foreigners happens frequently throughout the country. We know only that he was taken by armed men; it could have been a Taliban faction or common criminals."

[Contributing to this report was Anto Akkara in Thrissur, India.]