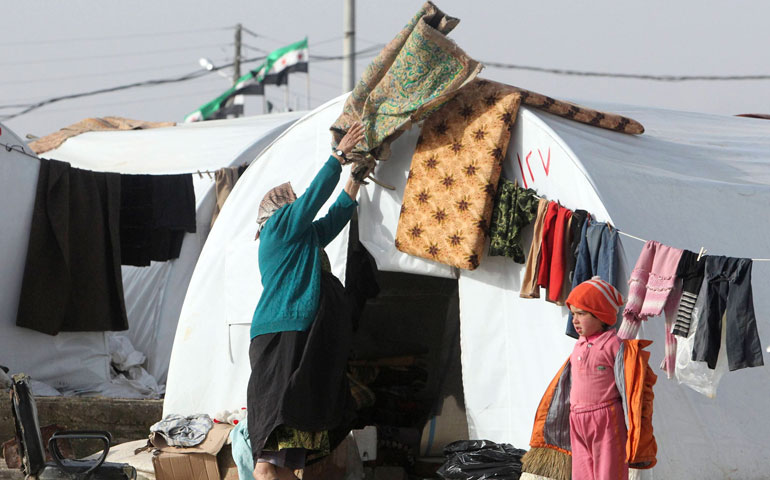 A Syrian refugee hangs a carpet outside her tent in late December at a refugee camp near the Turkish town of Kilis. (CNS/Reuters/Muzaffar Salman)

It was a cold, rough and desperate winter in Southern Europe in late 1538 and early 1539. Hunger was becoming common on the streets and in the alleys of Rome. Word spread quickly that Ignatius and his companions offered shelter, food and religious instruction for those they took in.

In all, thousands came to the home that would eventually be the spot, later in 1539, where the Jesuits formalized their identity as a religious order.

Did the men that winter perform humanitarian acts or works of religious piety?

A similar question could be asked about the Catholic response to famine in the Soviet Union in the early 1920s. At the behest of Pope Pius XI, Jesuit Fr. Edmund Walsh, who founded the Georgetown University School of Foreign Service, served as head of the Vatican's Papal Famine Relief Mission to the Soviet Union.

At a time when as many as 6 million may have perished due to hunger, that mission had an obvious humanitarian focus. But the assignment "was political, too," scholar Susan Martin said at a forum on faith-based humanitarianism May 15 at Fordham University in New York.

Martin, of Georgetown's Institute for the Study of International Migration, noted that the Walsh mission came at a time when the Soviet Union was then cracking down on the church.

Those assisted by the Catholic famine aid numbered less than 200,000, though that assistance did reach those made most vulnerable, Martin noted. Yet, as is so often the case with humanitarian assistance, the aid came with layers of complexity. Walsh and his fellow Jesuits were attired in secular garb and made clear their mission was humanitarian. At the same time, they did not hide the fact that their succor was, as Walsh called it, a gift "from the Catholics of the world."

During this time in the Soviet Union, Walsh, known for being a savvy political negotiator, secured the remains of Jesuit missionary and martyr Andrew Bobola and had them sent to Rome.

One result of the mission was that Walsh returned to the United States as a fervent anti-communist, and was a likely influence on Sen. Joseph McCarthy, among others. Upon his death in 1956, President Dwight Eisenhower eulogized Walsh, saying, "At every call to duty, all his energy of leadership and wisdom of counsel were devoted to the service of the United States."

At the Fordham forum, Martin and others said the various strands within the Walsh mission show that the theme of faith-based humanitarianism is nothing new.

Calling the history of missionary and relief work "intertwined," Elizabeth Shakman Hurd of Northwestern University in Evanston, Ill., said that for many, "it has been a package deal." As one example, in the wake of World War II, Gen. Douglas MacArthur saw the rebuilding of Japan as a quasi-religious mission in which democracy commingled with Christianity.

Even so, Fordham's Center on Religion and Culture, which sponsored the event, noted in its promotion that faith-based humanitarianism "has become a growth industry in recent years, channeling the influence of privately held religious commitments into the public sphere around the globe."

The image of faith-based humanitarianism may today be that of growing numbers of evangelical Protestant groups that blur the lines between their proselytizing and their relief and development work, often in locales like Haiti, where there is a long history of mission work.

But there is also a long history of groups like Catholic Relief Services and Jesuit Refugee Service (and my own agency, Church World Service) being rooted in Christian tradition and receiving support from churches, but adhering to international standards of neutrality when it comes to providing aid. Such agencies believe firmly that proselytizing is not in line with such standards.

Such a stance does not always sit well with others. On one assignment to Afghanistan about a decade ago, an evangelical Protestant I met told me she thought Church World Service was not taking the "next step" in trying to convert Muslims to Christianity. I strongly disagreed. (Most who work for Church World Service's Pakistan and Afghanistan program are Muslims.)

On the other side of the spectrum, I have to explain our stance and how we work to those with a secular outlook who wrongly assume church-based groups proselytize as a matter of course. Adding to the mix is the fact that groups like Church World Service, Catholic Relief Services and Jesuit Refugee Service are clear that faith traditions are foundational to what we do. "We believe in living in faith and working for justice. It's not 'either-or,' " Jesuit Fr. Kenneth Gavin of Jesuit Refugee Service said at the Fordham event. "To be a friend of Jesus to be a friend of the poor. We believe that."

Even so, Rieff noted that Western humanitarianism has its roots in imperialism and religion -- Christianity and empire went hand in hand. "Far from religion coming out of a secular matrix, the opposite is the case," he said. Secular humanitarianism, he noted, may be a singular, 20th-century phenomena. Its high point might have come in the 1960s through 1980s, when such avowedly secular groups without ties to religious networks -- Doctors Without Borders/Médecins Sans Frontières comes to mind -- emerged and became prominent.

With a world now changing again, the humanitarian landscape is becoming more diverse. We see that with the growth of international Muslim humanitarian organizations that, along with non-Muslim agencies, are responding to more and more crises in predominantly Muslim countries and locales. The Indonesia tsunami of 2004, the Darfur tragedy and the current unraveling of Syria all come to mind.

By some estimates, 50 million Muslims have been recipients of humanitarian assistance in recent years, said Masood Hyder, a veteran humanitarian who has worked for a number of United Nations humanitarian agencies. "Muslims are in trouble almost everywhere," he said of recent crises.

What kind of impact Muslim groups can make is yet unclear. Unlike Christian-based groups, which have worked through a network of churches, Muslim humanitarian organizations are not as yet extensively connected on the ground with religious communities, Hyder said.

And they come as the "humanitarian enterprise," as Hyder called it, is inevitably changing. This comes with the rise of powers like China and India as "middle-income countries" -- though both have plenty of poor people within their borders and still struggle with problems like malnutrition.

Western-based aid itself may not have quite the same importance it once had, Hyder added. In a humanitarian crisis, more and more people in poor countries are getting through horrendous moments with cash remittances from relatives who have migrated to other countries.

Yet even with all of the flux, the work of humanitarian organizations remains, at critical moments, important and necessary.

Gavin recounted the story of one Catholic priest in Syria, Jesuit Fr. Mourad Abou Seif, who has earned the respect of Muslims and Christians alike for doing his best to provide assistance as needed, regardless of faith. In the midst of street battles and shootings, this priest had taken great life-threatening risks, Gavin said. He transported, along with a grieving mother and brother, the body of a young Syrian man, killed in crossfire on an Aleppo street, to a Muslim cemetery for burial.

"That's a faith-based response," Gavin said. "We are moved to act by faith, but in an inclusive, not exclusive, way."

[Chris Herlinger is a frequent contributor to NCR. He is a New York-based freelance journalist and a writer with the humanitarian agency Church World Service. He and photographer Paul Jeffrey are beginning work on a third book on humanitarian themes for Seabury Books. The new book will focus on the issue of global hunger.]

A version of this story appeared in the June 7-20, 2013 print issue under the headline: The landscape of faith-based humanitarian aid reflects a world in flux.