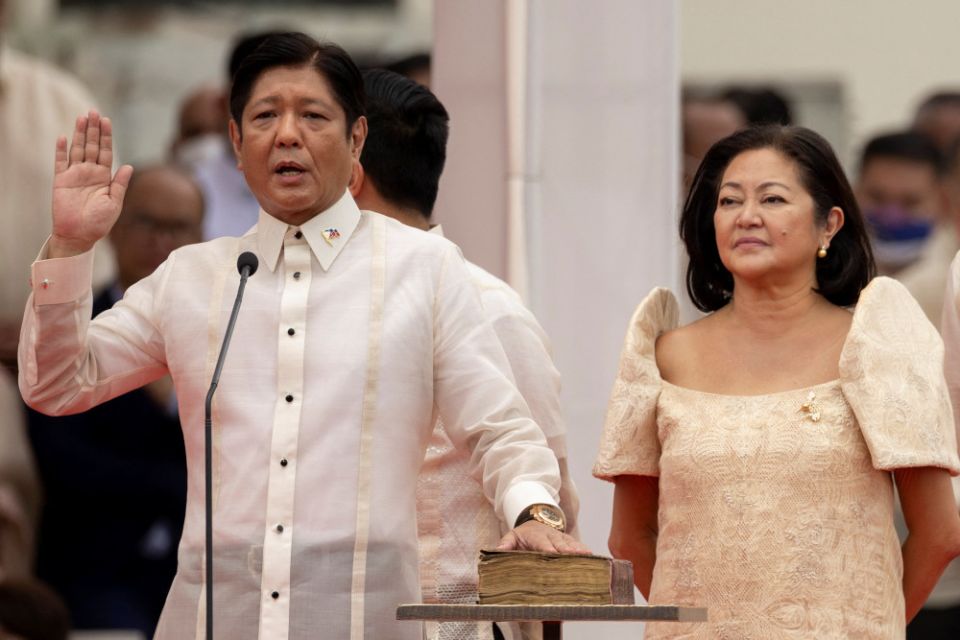 Ferdinand "Bongbong" Marcos Jr., the son and namesake of the late dictator Ferdinand Marcos, takes the oath of office beside his wife, Louise Araneta-Marcos, during the presidential inauguration ceremony at the National Museum in Manila, Philippines, June 30. (CNS/Reuters/Eloisa Lopez)

Manila, Philippines — Ferdinand Marcos Jr. was sworn in as the 17th president of the Philippines June 30, succeeding Rodrigo Duterte.

The 64-year-old officially began his six-year term at midday after a short visit to Duterte at the Malacanang Palace, the official residence of the president.

The Asian Catholic news agency ucanews.com reported Marcos, surrounded by his family and closest political allies, took his oath of office before the chief justice outside the National Museum. Among the family members, who included his wife and three sons, was his mother, Imelda Marcos, wife of former dictator Ferdinand Marcos Sr.

"This is a historic moment for us all. I feel it deep within me. You, the people, have spoken. And it is resounding. When my call for unity started to resonate with you, it did so because it echoed your yearnings, mirrored your sentiments, and expressed your hopes for family, for country, and for a better future," Marcos Jr. said in his speech.

"I believe that if we but focus on the work at hand and the work that will come to hand, we will go very far under my watch."

Marcos Jr. said he understood the weight of the responsibilities and problems that face him. He inherits a country trying to recover from the devastating impacts of the COVID-19 pandemic and battling debt and skyrocketing inflation.

"I fully understand the gravity of the responsibility that you have put on my shoulders. I do not put it lightly, but I am ready for the task," Marcos said.

The president also paid tribute to his father who, according to him, got the job done with or without the support of his friends and allies.

"I once knew a man who saw how little had been achieved since independence. He got it done. So it will be with his son. You will get no excuses from me," he said.

Instead of enumerating more about his father's legacy, Marcos Jr. encouraged Filipinos not to look at history but the future.

"I am not here to talk about the past. I am here to tell you about our future, a future of sufficiency, even plenty of readily available ways and means to get done what needs doing by you, by me. We do not look back but ahead," he said.

Other critics called on the new president to repair the country's image, which they say has been seriously tarnished by Duterte's deadly war on drugs, in which thousands of drug suspects were killed.

They also urged Marcos to protect press freedom, which took a hit in late June with the announcement by the broadcaster regulator that it will shut down the Rappler news website, which had been highly critical of the Duterte administration.

World | Marcos sworn in as Philippine president: 'You, the people, have spoken'

The changing face(s) of moral theology