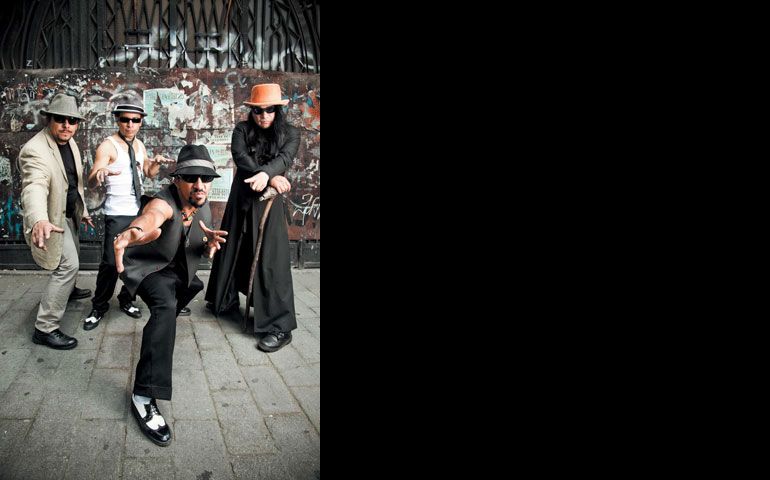 Mexico City — Ciudad Juárez is Mexico's deadliest city, where the drug war has been exacerbated by a well-documented (and still unsolved) wave of violence directed against women. But a growing number of young people are using music as a platform to raise their voice against the culture of violence, fear and apparent impunity enjoyed by the drug cartels and those shadowy criminals responsible for the wave of femicides.

Since 1993, more than 700 women have been murdered or sexually assaulted in Ciudad Juárez, just a few miles from the mild-mannered suburbs of El Paso, Texas. The violence has been well-documented by, among others, Teresa Rodriguez, a Univision reporter whose 2008 book, The Daughters of Juárez: A True Story of Serial Murder South of the Border, gave voice to the city's many women who live in daily fear.

The new music being fashioned by young people on the border -- the genre has come to be known as nueva ola fronteriza ("new border wave") -- stands in sharp contrast, both lyrically and sonically, to narcocorridos ("drug ballads"), a genre of music that glamorizes the exploits of the drug cartels. Those ballads, which spin tales of drug lords such as Ciudad Juárez's Amado Carrillo Fuentes (known as the Lord of the Skies) and Tijuana's Arellano Félix brothers, who controlled the drug routes between Tijuana and San Diego, are now held in disdain by many Mexican youth. Their attitudes are perhaps best summed up by a popular YouTube video depicting young people ridiculing legendary narcocorrido groups such as Los Tigres del Norte as "so last decade."

In Ciudad Juárez, the popularity of nueva ola fronteriza music is clearly gaining acceptance, even to the point of becoming mainstream. One band, Maldita Vecindad ("Damned Neighborhood," roughly translated) is so popular that it has garnered major corporate sponsorships, including from Corona beer. Another local band, Pájaros Sin Alas ("Birds Without Wings") eschews the style and narrative of the narcocorrido groups by creating music with a modern electronic beat and lyrics that speak not of drug deals gone bad, but of Zen and peace. Yet another popular group, Caifanes, has hundreds of thousands of fans and plays to sold-out stadiums. And arguably it is Diego Antillon, of the group Airek, who best exemplifies the impulse of nueva ola fronteriza to forego words altogether -- consider Airek's song "Magic" -- in favor of a more evocative and less literal approach to the music.

While the nueva ola fronteriza movement surges along the Mexican side of the border, less certain is whether the new music, and the message it contains, will resonate in the U.S. Southwest, where narcocorridos have been wildly popular for more than a decade. In 2004, just a short time after narcocorridos had crossed over to a U.S. audience, the BBC reported: "In the U.S. the market for Mexican regional music, including narco corridos, is worth about $300 million a year, with Los Angeles being the hub of the narco corrido industry. Los Tigres' most recent album sold nearly 500,000 copies in the U.S. alone."

But the narcocorridos craze is ancient history to today's youth, who are filling stadiums across northern Mexico, and whose music is redefining the cultural scene in Ciudad Juárez.

As Economy of Francesco ends, pope calls on the young to chart a new development model