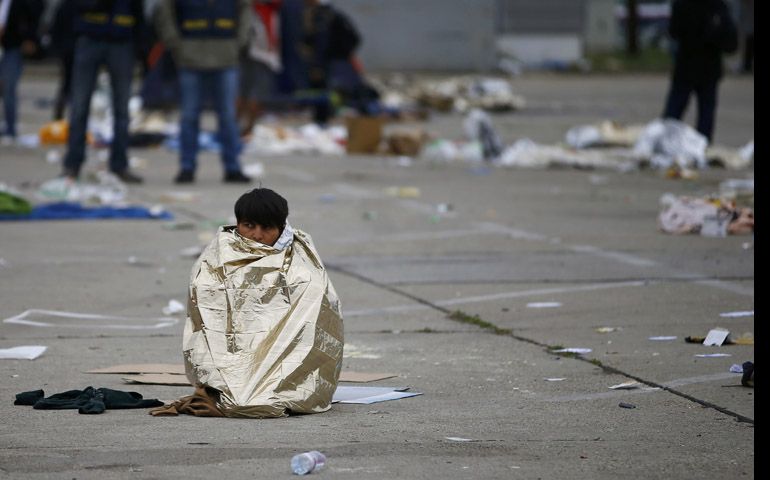 A migrant sits wrapped in an emergency blanket at the crossing point between Hungary and Austria in Nickelsdorf, Austria, Sept. 11. (CNS/Leonhard Foeger, Reuters)

Austrian and German bishops have given top priority to the migrant crisis and made it a key policy issue.

On Sept. 4, 2,000 migrants holding EU flags, set out on foot for the Austrian border along the main highway -- a trek of about 106 miles. They had been waiting at the main railway station in Budapest for days to board trains to Austria but had been prevented from doing so by the Hungarian authorities.

Later that evening, the Hungarians changed their minds and decided to send buses to pick them up and drive them to the border. The migrants were deposited at the Austrian border late at night and walked across in the pouring rain. They reached the frontier town of Nickelsdorf soaked to the skin. Aid organizations and hundreds of voluntary helpers welcomed them and made them comfortable for the night.

One of the first to welcome them personally in Nickelsdorf, was Cardinal Christoph Schönborn of Vienna.

“I think the 71 refugees who were found dead from suffocation in a refrigerator truck in August greatly shocked Austrians,” Schönborn said. “That was when very, very many people in our country realized that the way refugees were being treated was intolerable. The dramatic events of last night have once again shown how cooperation and humanitarian commitment can defend European ideals and save lives.”

Earlier in the week, in his sermon at a memorial service at St. Stephen’s Cathedral in Vienna for the 71 migrants who had died from suffocation in a refrigerator truck, Schönborn said that the present epic migration had been foreseeable.

“It has now become reality and will remain reality and will change all our lives,” the cardinal said recalling Pope Francis’ criticism of the “globalization of indifference” on his visit to Lampedusa and his (the pope’s) reminder that “we cannot look away.”

The fact that Pope Francis had especially prayed for the victims of the truck tragedy in Austria at the midday Angelus in the Vatican on Aug. 30, showed that he was not looking away and how closely the pope had his eye on the refugee situation, Schönborn said.

By Sept. 6, over 11,000 migrants, chiefly from Syria, Iraq and Afghanistan, arrived in Vienna from Nickelsdorf. Most of them went on to Germany, their preferred destination, by train.

German Cardinal Reinhard Marx of Munich and Lutheran Bishop Heinrich Bedford-Strohm were among the first to welcome the first batch of refugees to arrive in Munich by train from Austria.

“Everything must be done so that no one dies of thirst on borders, drowns in the Mediterranean or suffocates in trucks,” Marx said. Money must not play a role when it came to saving lives, he emphasized. Referring to the 93.2 mile-long, barbed-wire fence the Hungarian government had built along its southern border to prevent migrants from crossing into Hungary from Serbia, Marx said building fences was “unacceptable” as it would not prevent people from dying but would rather “provoke new dramatic incidents.” “The Catholic church and all of us bear a special responsibility here,” Marx said.

“Unfortunately the (Hungarian) church is silent. That hurts and I am ashamed,” he told the German radio station deutschlandfunk. “We are reacting far too slowly. Unlike Pope Francis. He reacted very quickly. On his very first apostolic journey he went straight to Lampedusa. And on the very day that Hungary announced that it intended to erect a border fence, he again immediately reacted with the following appeal: ‘Don’t build a wall. Refugees are your brothers and sisters,’ ” Beer said.

Beer said he could understand that ways must be sought “to restrict the flow of refugees somehow so that we can cope with the situation” but deplored the lack of dialogue in the Hungarian Church.

Hungarian Cardinal Peter Erdö of Budapest, also deplored that the Hungarian church is forbidden by law to take in refugees and could therefore only help them “discretely.” Erdö said if the church took in refugees, they would be legally regarded as traffickers under Hungarian law.

But the abbot of the famous Benedictine Abbey of Pannonhalma, Hungary, Archabbot Asztrik Varszegi and his monks, decided to defy that law and have taken in several Syrian families and a number of unaccompanied minors who were walking to the Austrian border along the motorway at night.

“We must not leave anyone standing at our doors as that would be against the Gospel message,” Varszegi said. Pannonhalma has a long tradition of helping refugees and sheltered Jewish refugees in the last days of the Second World War.

Schönborn has meanwhile called on all the bishops in the EU to “find a common line” on the migrant issue.

“We expect the EU to find a common stance on the migrant issue so we may also expect a common line from EU bishops,” Schönborn said.

*An earlier version of this story included an incorrect first name for Miklos Beer​.

World | More than 10,000 migrants pour into Austria and Germany from Hungary