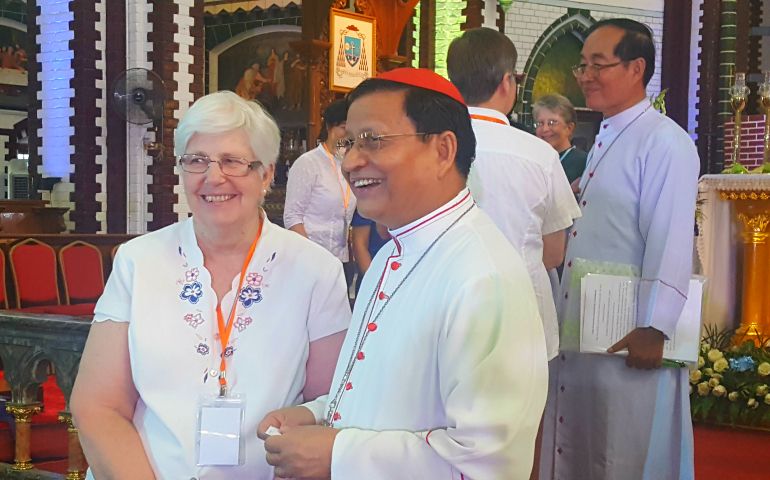 Yangon, Myanmar — The Catholic Church is helping to rebuild Myanmar as it emerges from six decades of military rule and isolation through peace-building efforts and education, Cardinal Charles Bo of Yangon said in a recent interview here, as plans progress to establish diplomatic relations between the country and the Holy See.

The most important issue facing the country "is to see the civil war stopped with the Kachin, between the [Kachin Independence Army] and the military government," Bo said. "We'd like to see peace in the Kachin state and with the Rohingyas," he said. International attention, including by Pope Francis, has focused recently on the Rohingya, a minority Muslim people named the world's most persecuted people by the United Nations.

On April 26-27, the Catholic Church, other Christian communities and people of other faiths — Muslims, Hindus and Buddhists — are holding an interfaith peace conference with plans to invite members of the military, armed groups and civil society, he said. The Catholic Church in Myanmar is offering first Friday Masses, along with special fasts and adoration of the Blessed Sacrament, "for peace in the country," said Bo, named in 2015 as the first cardinal from Myanmar. "That's the main concern."

Continued ethnic conflicts mar the fledgling democracy in Myanmar, which, in March 2016, witnessed the inauguration of President U Htin Kyaw, a milestone in a transition to a mostly civilian-led government. He is a close ally of Aung San Suu Kyi, the country's de facto leader as state counselor, a position above the presidency which allows her to direct the country's affairs. Known affectionately, even reverently, as "The Lady" in Myanmar, she led the opposition to the military government, was awarded the 1991 Nobel Peace Prize and lived under periodic house arrest for more than 15 years until her release in 2010, when she helped usher in the subsequent victory of the National League for Democracy party.

From his office in the compound of St. Mary's Cathedral, an ornate 150-year plus structure with twin towers dwarfed by the massive pagodas in this Buddhist-dominated country, Bo spoke about the changes in the country, his friendship with San Suu Kyi, and the challenges still ahead for the nation and the church in Myanmar.

"[Comparing] before, five or six years ago, and now, there is quite a dramatic change in the country," Bo said. "It's just been two to three years that it's begun to open up and we could speak out freely." The National League for Democracy is trying to refocus the country's priorities on education and health, he said, while before the budget was mostly used for the military. "Although there are many concerns and still problems to be addressed, I think the people feel so free to speak out and be more relaxed. They will comment on the situation and what the government is doing very freely."

The country's transition is visible in Yangon, where construction cranes erecting towering new buildings vie with sidewalk vendors offering fried food and fresh fruit. Men dress in traditional pasos, long, dark-colored wraps offering a cool alternative to pants in the hot, humid climate, though teens and 20-somethings often opt for jeans and shorts. Women wear brightly colored skirts called longyi and paint designs on their faces with thanaka, a white or yellowish cream made from a local tree that protects skin against the sun. Buddhist monks, novices and nuns weave through crowded sidewalks and markets with begging bowls.

Yet there are stark reminders of continued ethnic and religious tensions in the country of 54.6 million. The assassination on January 29 of prominent lawyer U Ko Ni, an advisor to the National League for Democracy party and a Muslim who promoted religious tolerance, shocked the country. He had been drafting changes to Myanmar's constitution to rein in the power of the military, which still exercises considerable control. The military has denied any involvement in Ko Ni's killing. 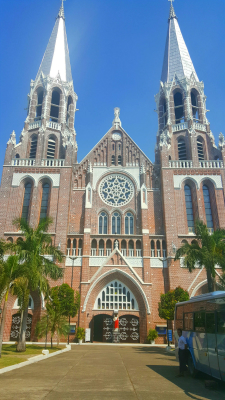 A staunch defender of the rights of Muslims, a minority in the Buddhist-dominated country, Ko Ni had just returned as a delegate on a government trip to Indonesia about religious issues. He had also been critical of the treatment and status of the Rohingya, who are denied citizenship in Myanmar.

Attention to the plight of the Rohingya heightened as violence escalated since last fall when insurgents attacked military posts on the border with Bangladesh, killing nine guards. Suu Kyi's silence about the brutality against the Rohingya drew criticism, such as a letter in December to the U.N. Security Council signed by two dozen activists, including a dozen fellow Nobel Peace Prize laureates.

Reports of villages being torched, women raped and children and elderly people beaten and killed prompted the Office of the U.N. High Commissioner for Human Rights on Feb. 3 to decry the "devastating cruelty" detailed in its report and call on the Myanmar government to stop the human rights violations.

Days later, Pope Francis in his weekly audience stepped up his prior criticism of Myanmar's treatment of Rohingya.

"They have been suffering, they are being tortured and killed, simply because they uphold their Muslim faith," Francis said. He asked those present to pray with him "for our Rohingya brothers and sisters who are being chased from Myanmar and are fleeing from one place to another because no one wants them."

By mid-February, the Myanmar government said the military crackdown had ceased, and while largely denying that abuses had occurred, said reports would be investigated.

Bo said he and other bishops had previously been in contact with the Vatican about the Rohingya, though the pope's address in February appeared to be prompted by the U.N. report. The same day as the pope's comments, Feb. 8, Bo said he and the papal nuncio had a meeting with Suu Kyi about the Vatican renewing diplomatic ties with the country.

"That was very positive and will happen very soon," he said.

During the meeting, he brought up the international community's nervousness about her silence on the treatment of the Rohingya. Her response, Bo said, was that "the international communities are really exaggerating too much and just focusing on this issue. She said no doubt in some instances we admit some atrocities are happening, but she said there are people who really exaggerate," Bo said. "Things are happening there, but the genocide and ethnic cleansing, she doesn't seem to admit that. All the same, she said she is trying to investigate more the reality of things."

One of the most serious crimes in Myanmar under the military regime was to have contact with Suu Kyi, yet Bo managed to maintain a friendship with her and her family (her husband, Michael Aris, died in 1999). He visited her office in her house and kept in contact with cards and letters.

"It was dangerous," Bo said of his continued contact with her. "But the military these past years have never questioned me on that topic — they never came to ask me or never investigated me on this." 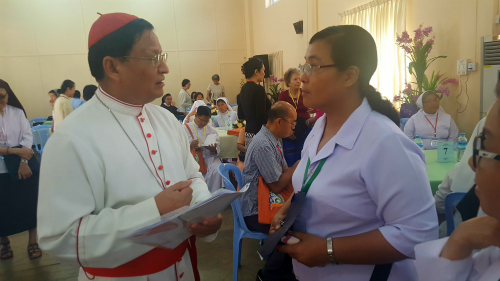 One reason he wasn't afraid, he said, "was that I never talked with her on anything about politics — just personal things and that I was praying for her." As the momentum progressed for democracy and elections, "the whole church was for her," he said. Bishops would hold conferences or allow public speeches in support of the National League for Democracy in church compounds. Catholics make up about 5 percent of the population, spread across 16 dioceses.

In addition to advancing peace, restoring the country's educational system is a top priority, Bo said. The church in the next few months will propose that the government return more than 80 schools that were confiscated in 1965. After nationalization, the quality of Myanmar's education system "went down dramatically, so we'd like to contribute to education through the schools," he said. "Before 1965, our schools were really fine and the tops in Asia. We want to help not only with local resources but there are also religious congregations that have resource persons, and those will be able to assist us so we can manage."

The church isn't waiting for the return of the properties to begin education efforts. Four Catholic primary schools will be opening in different dioceses, he said, and two secondary or high schools are already operating in the country. The schools will serve those of all faiths.

The church is also starting teacher training schools and the Myanmar Leadership Institute in conjunction with Georgetown University.

Events such as the recently-concluded Asia-Oceania Meeting of Religious are important for the church and the nation, he said, to help build leadership and break the isolation of military rule. "The government as well as the military and the citizens need more contacts and more exposure to the outside world to see the reality of things," he said.

Unlike in China, Vietnam or Cambodia, Catholics did not face direct persecution, he said. But there were restrictions in constructing church buildings, and clergy and religious with outside contacts in Rome and other countries were suspect. "Even our even our homilies and sermons were censored by the military intelligence," he said. "But now of course we feel more free — we had fear of making any comment on political situation, but now, as the example given by Pope Francis, we try to speak out about human rights and peace and justice."

Foreign women and men religious serving in Myanmar cannot enter under religious visas but must come into the country under business or social visas, and they are not allowed to wear religious clothing. Bo said he hopes those restrictions change in the near future, though the military still controls the defense, home affairs and borders.

Plans are proceeding to establish diplomatic relations with Vatican City, one of a half-dozen smaller countries with which Myanmar is moving to establish ties. That will make a difference, Bo said "in that the Vatican will be able to speak straight to the country, and the country will manage to say whatever they want to say — so a direct link or communication with each other through embassies." 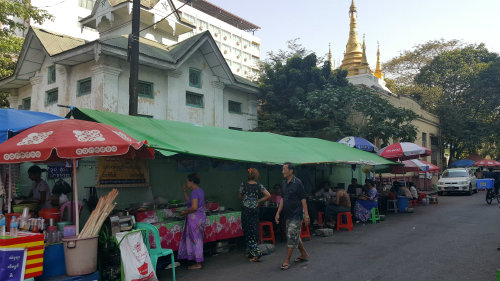 One caution for the international community is to understand the newness of the country's changes, he said.

"There are people inside and outside in the international community that sometimes might expect too much from the leaders of the new government. You can't build democracy just overnight, and there are so many issues here, and I think we have to go slowly, step by step, regarding the Rohingyas, as well as the civil war, the education field, health care. Just seeing the infrastructure of buildings coming up doesn't mean the country is already developed," he said.

Citing education as one example, Bo said that 40 percent of children drop out of primary school in some areas of the country.

[Gail DeGeorge is editor of Global Sisters Report. Her email address is gdegeorge@ncronline.org. Follow her on Twitter: @GailDeGeorge.]