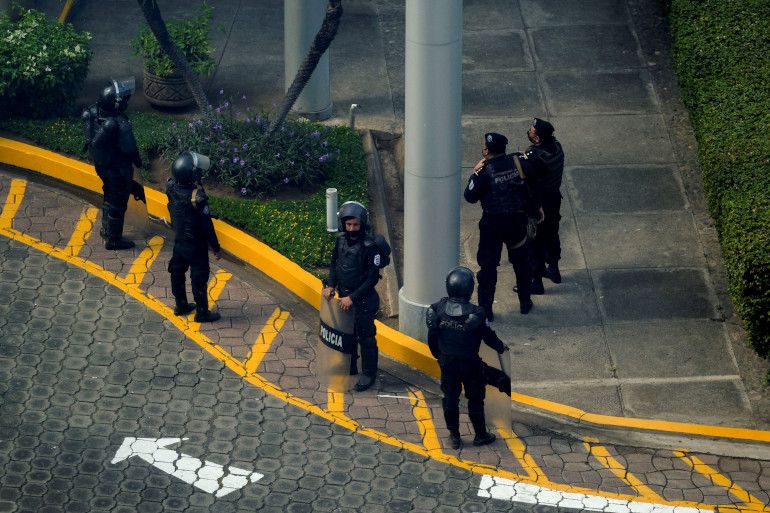 Nicaraguan security forces keep watch outside the Invercasa building as they raid the office of the independent news outlet Confidencial in Managua, Nicaragua, May 20, 2021. (CNS photo/Carlos Herrera, Reuters)

Managua, Nicaragua — Nicaraguan police have arrested another opposition politician, bringing to six the number detained over the weekend.

Five were arrested on Sunday, the biggest one-day roundup so far in President Daniel Ortega’s campaign to jail anyone who might challenge his rule.

The last arrest, which came late Sunday, was that of Victor Hugo Tinoco, the leader of the political movement Unamos. Another leader of that party, Suyen Barahona, was arrested earlier in the day. On Sunday, police also arrested prominent ex-Sandinista dissidents Dora María Téllez and Hugo Torres and, another opposition leader, Ana Margarita Vijil. Arrested Saturday was Unamos activist Tamara Dávila.

The weekend arrests suggest Ortega has moved beyond arresting potential rival candidates in the Nov. 7 elections, and has begun arresting any prominent member of the opposition. The arrests bring to 13 the number of opponents detained since June 2.

“It’s not just potential candidates any more, it’s political leaders,” former general and Sandinista dissident Hugo Torres told The Associated Press before he himself was arrested Sunday. “This is not a transition to dictatorship, it is a dictatorship in every way.”

Tellez was a leading Sandinista militant who led an assault on the National Palace in 1978, taking hostage the congress of dictator Anastasio Somoza in exchange for the release of Sandinista prisoners.

Following Somoza’s overthrow, Tellez served as health minister in the first Sandinista government which ruled from 1979 to 1990. Like many former guerrillas, she later split with Ortega.

Police said they arrested the opposition leaders on charges related to a recently enacted law that classifies as treason any support for sanctions against officials in the Ortega regime; the U.S. has slapped sanctions on dozens of officials.

Under a law passed in December, Ortega’s government has the power to unilaterally declare citizens “terrorists” or coup-mongers, classify them as “traitors to the homeland” and ban them from running as candidates.

The law punishes those “who lead or finance a coup ... encourage foreign interference, ask for military intervention ... propose or plan economic blockades, applaud and champion the imposition of sanctions against Nicaragua or its citizens.”

Those accused “will be traitors to the homeland, and for that reason may not run for public office.” Treason is punishable by prison terms of up to 15 years.

Ortega has already arrested four potential opposition candidates who might have challenged his bid for a fourth consecutive term.

Before his arrest, Torres said he had seen drones flying around his home in recent days, of the type used at Tellez’s house.

“This interview may be the last one I give,” Torres said. “I am here, waiting for them to come for me.”

In a five-page letter dated June 11, Nicaragua's nine Catholic bishops had called for unity and for democratic principles to prevail in the November elections, and urged. politicians and citizens to work for the common good.

In the letter, the bishops said they were seeking to "enlighten consciences and indicate paths of love, conversion, reconciliation, unity and hope, to build a Nicaragua on foundations of peace and justice." They added, "We reject all that tries to harm peace, based on justice and respect for human rights."

Speaking of the country's political system, they said, "We recognize that the validity of the principle of the division of powers in the State is of great importance for our people." They added, "We want and prefer for Nicaragua a democratic system, where the political authority is accountable to the people and where representative bodies should be subject to effective control by society."

Ortega initially led Nicaragua from 1979 to 1990 following the Sandinista revolution that ousted Somoza. He returned to the presidency in 2007 after three failed election attempts, and he won reelection in 2011. He then sidestepped term limits to get himself reelected in 2016, and packed courts and government agencies with allies. The Sandinista party controls the courts and the legislature, and has stifled universities and the Roman Catholic church.

Torres said Ortega has now instituted a more suffocating dictatorship than Somoza, who faced opposition from the within the church, intellectual circles and universities.

“I think Ortega has outdone Somoza,” said Torres. “He has subordinated all the power to himself as Somoza never could. He has a bigger repressive apparatus than Somoza ever had.”

Julie Chung, the U.S. State Department’s acting assistant secretary for Western Hemisphere affairs, said via Twitter that Ortega’s “campaign of terror continues with more arbitrary arrests this weekend. OAS members must send a clear signal this week: enough repression. The region cannot stand by and wait to see who is next.”

Trip to Africa provides brush with nature, beginnings of a good joke

We have a moral obligation to take in Syrian refugees