As Obama pushes for trade pact fast track, faith groups say to call the deal off 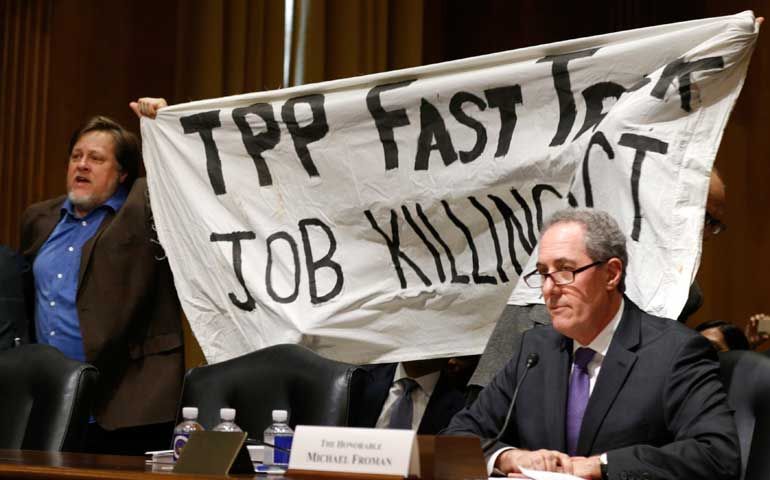 Thirty-five faith-based organizations and 31 Catholic leaders and theologians are calling on President Barack Obama and Congress to cease negotiations on the Trans-Pacific Partnership -- a trade agreement involving the U.S. and 11 other countries in the Pacific Rim.

The Obama administration wants to fast-track the pact, arguing it will give the president more leverage in negotiations by assuring his trading partners the agreements won't be amended. But interreligious coalitions that released the letters Feb. 18 say that permitting him to fast-track, essentially delegating congressional authority to the president, is inconsistent with the country's democratic and moral values.

Fast-track authority would also make it more difficult to challenge and modify the content of the agreement, which coalitions find morally troubling as well.

According to the Congressional Research Service, the Trans-Pacific Partnership aims to liberalize trade in nearly all goods and services and include rules-based commitments beyond those currently established in the World Trade Organization. Potentially, it could eliminate tariff and nontariff barriers to trade and investment among the parties.

The Obama administration began negotiations on the partnership nearly five years ago, saying it would enhance U.S. influence in Asia, a goal in the administration's agenda. But congressional Democrats have expressed disdain for the agreement, leaving the president to seek allies among Republicans.

Interreligious coalitions said they believe the agreement could increase the wealth gap while making it harder to enforce environmental policies.

"Trade, like the rest of the economy, must be a means of lifting all people out of poverty and ensure a country's ability to protect the health, safety and well-being of its citizens and our planet," said Gerry Lee, director of the Maryknoll Office for Global Concerns, one of the signers of a letter from the Interfaith Working Group on Trade and Investment.

Adversaries of the agreement find it too similar to 1994's North American Free Trade Agreement (NAFTA) between the U.S., Canada and Mexico. Post-NAFTA, the U.S. took a major hit when 700,000 jobs were outsourced, more than 60 percent of them in manufacturing.

Lee said his organization has seen firsthand impacts of NAFTA around the world, such as loss of farms, unsustainable jobs, families unable to afford medicine, and workers earning less than $2 a day. An estimated 2 million corn farmers lost their livelihood and ended up as illegal immigrants looking for work in the U.S., he said.

Access to affordable medicine was greatly limited in Peru: A 2010 study by its government found that the monthly cost of medicine to treat cancer cost the equivalent to 880 times Peru's daily minimum wage.

Currently in Vietnam, Lee said, 68 percent of those with HIV receive treatment, but under the Trans-Pacific Partnership, the U.S. proposal protecting monopolies of pharmaceutical corporations would allow only 38 percent to have access to medicine.

While NAFTA may have not lived up to its promise in boosting the U.S. economy, a Feb. 12 report by the centrist think tank Third Way said that the vast majority of trade deals signed into law by Congress in the 21st century have actually shrunk the trade deficit and created more jobs. "Nearly all recent trade deals have improved our balance of trade in goods, and in the aggregate the gains have been substantial," the report said.

Main concerns regarding the Trans-Pacific Partnership include:

"Those negotiating the trade agreement -- they are not evil, they are not conspirators," said Social Service Sr. Simone Campbell, executive director of NETWORK, a national Catholic social justice lobby. "They are people adequately representing their own perspective. But one of the problems we people of faith know is that one of the perspectives ... is not at the table. It is the voices of those adversely impacted historically by the trade agreement that need to be considered as we move into the future."

Despite the enormity of the agreement and its significance to American labor, its details have not been disclosed; the majority of what is known about this partnership has been revealed through leaked documents.

Interest groups, however, are required to sign nondisclosure agreements, robbing them of the voice to object.

"The secretive process that has marked this legislation offends the dignity of our citizens and deprives them of their fundamental right to participate in the creation of law, especially an agreement that so profoundly affects their own livelihoods and those of their families and neighbors," stated a letter circulated by Catholics in Alliance for the Common Good.

While the content of the Trans-Pacific Partnership and its lack of transparency have been widely questioned, the fast-track authority Obama is attempting to implement has been one of its most controversial details.

This would limit Congress to 90 days to study the hundreds of pages within the agreement and would limit debate to 20 hours on the floor. Hearings and amendments would be prohibited. U.S. trade representative Michael Froman told lawmakers the agreement is on course, due in as soon as two months.

"If corporate lobbyists and their allies in business and government were so convinced the TPP is good for the American people, they wouldn't try to railroad this legislation through Congress without due oversight from the people and their elected officials," Catholics in Alliance for the Common Good said in its letter to Obama and Congress.

"They're doing this because they know what we know: this bill is imprudent and immoral."

[Soli Salgado is an NCR Bertelsen editorial intern. Her email address is ssalgado@ncronline.org.]