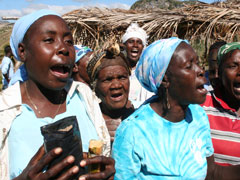 Members of a food cooperative in Artibonite in northern Haiti celebrate with music and singing. (Photos by CWS/Chris Herlinger)

PORT-AU-PRINCE, HAITI -- If President Michel Martelly’s vows of change for Haiti are to come true, they’re going to have to be felt by young people like Mikency Jean.

Jean, 22, a native of the city of Cap Haitien, came to the capital of Port-au-Prince at age 11 to work as a domestic servant (or restavek) for her aunt. Jean does not like to dwell much on that work -- there is little to say about 12-hour days cleaning and cooking without pay.

Instead, Jean would rather talk about her participation in a church-supported training program for restavek youth, and about the possibilities of a paid job and career as a restaurant cook.

Jean’s initial dream was to become a nurse, though she no longer thinks about that because she does not have the means to study nursing; still, her current training has given her a sense of direction and dreams of a better life.

Nonetheless Jean said she and others her age are skittish about the future. They are not sure if their training will ultimately get them the jobs they want. “We talk about it all the time,” she said, “and we don’t feel there is a bright future for the country.”

It is precisely that sense of pessimism -- grounded in reality and pragmatism and keenly felt among Haiti’s youth -- that Martelly faces as he begins his presidency in a country still recovering from years of political uncertainty, economic disquiet, social unrest and, of course, 16 months of recovery from a devastating earthquake.

In his May 14 inaugural speech, the one-time carnival singer called for an end to what he called the humiliating “policy of begging,” an apparent reference to years of Haitian dependence on international assistance. “We are workers, we work well when opportunities are given to us,” he said. “Haitians, this country is ours, let us gather to remake our country.”

At the same time, Martelly called for a restoration of “the authority of the state, the rule of law.” Order and discipline, he said, “will prevail throughout the entire national territory.” Order, he said, will be necessary so that outside “investors [can] gain confidence, come to invest, build, so that we can find the development that I seek” -- development, he said, that will allow Haitians “to get out of poverty, so you can live another way.”

Martelly asked the international community to have confidence in him, finding in his new government “transparency and honesty. This is a new Haiti, a new Haiti open for business now.”

Any president of Haiti has to address different audiences -- so the call for internal national unity and the promise of change while also appealing for external investment hardly seems surprising, though the two goals have rarely been in sync in a country where outside domination has been a crippling norm.

Can Martelly pull it off? It may be difficult -- Mikency Jean’s pessimism barely scratches the surface of apprehension and disappointment many Haitians feel toward their government.

In terms of health services, for example, the Haitian government is a vacant presence, particularly in impoverished rural areas. “The government doesn’t exist,” said Dr. Jean-Gardy Marius, a Haitian physician who oversees a clinic in Rousseau, almost 70 miles north of Port-au-Prince. The clinic receives assistance from U.S. and European churches.

“The Haitian government doesn’t even know how many people live in this country,” Marius said earlier this year. “We’ve never had a government that thought about the Haitian people. The government has just worked for their family or friends. There’s never been a national policy. Never.”

“You’re working against so many factors in this country. People in rural areas -- they have nothing. Nothing. They don’t have hope. So many people are living by the goodness of God.”

Haitians often invoke the goodness of God, and a sense of hope in the social realm does exist in pockets. Food cooperatives in Haiti’s Northwest and Artibonite regions, for example, have been forming since the 1990s to raise and harvest crops by pulling resources together expressly because the state has not provided farmers with the basics like land or seeds.

The issue of food and hunger in Haiti has a distinct “political undertone to it, because the government is not present and does not have a system to provide agricultural credit to peasants,” said co-op organizer Cher-Frere Fortune. An operative, functioning state -- “a structured state” -- should be able “to bring services to the areas where people live,” he said. The Haitian government hasn’t been able to do that, he added.

In his inaugural speech, Martelly addressed the issue of rural problems and Haiti’s almost crippling reliance on Port-au-Prince by saying that it is not only the earthquake-stricken capital city that “must be rebuilt, it’s all the country that needs to be built, rebuilt … reforested, to be developed.” The new president even specifically said seeds must be made available to farmers.

Does that represent a real commitment or is it just another empty political promise? Fortune, like a number of others in their 40s who work for humanitarian agencies in Haiti, is taking a rather cool approach toward Martelly, still known by his stage name of “Sweet Micky.”

While Fortune and others admire the new president’s having upended Haitian politics with a populist platform of change during the recent national elections, they have seen too many political disappointments in their lives to embrace Martelly fully.

“One of the problems we have in Haiti, and I fear it for President Micky, is that presidents try to change the system but it’s the system that changes them,” said Polycarpe Joseph, a Jesuit-trained lay Catholic leader who heads the Ecumenical Center for Peace and Justice, the Port-au-Prince educational center that runs the training program for the restavek youth.

“Look at [former President Jean-Bertrand] Aristide,” Joseph said. “The system ate him. It’s the way the system is built. Your hands are tied.”

Maybe so. But at a Catholic-run cholera clinic in the Wharf Jeremie area of Cité Soleil -- one of the toughest areas in the Haitian capital -- there seemed to be measured hope for the new president, particularly among those who once supported Aristide.

“Aristide was the only president who cared about the poor,” said saleswoman Doudeline Surena, 45. “We don’t know if he [Martelly] will be that way. But we certainly hope so.”

[Chris Herlinger, a writer for the humanitarian agency Church World Service, is a New York-based freelance journalist who reports frequently on humanitarian issues for NCR. His book, Rubble Nation: Haiti’s Pain, Haiti’s Promise, will be published later this year by Seabury Books.]

Bishops condemn rebels’ use of hostages