Pilgrims celebrate lives of US churchwomen 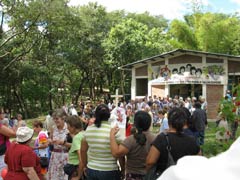 International pilgrims and Salvadorans gather Dec. 2 outside the church at Santiago Nonualco, site of the assassination of four U.S. churchwomen. (Margaret D'Huyvetter)

SAN SALVADOR, EL SALVADOR -- Dozens of pilgrims descended upon El Salvador to remember and be inspired by the lives, work and sacrifice of five late American churchwomen, including four who were raped and gunned down by Salvadoran national guardsmen 30 years ago this month.

But for all the flowers, recollections and tears offered last week on pilgrimages organized by the Maryknoll Sisters, the SHARE Foundation, Pax Christi and others, a monument in a city park here is a reminder that the murdered women were but four of the tens of thousands of civilian adults and children who died and disappeared in a civil war that stretched from the early 1970s until 1992.

The names of Maryknoll Srs. Ita Ford and Maura Clarke, Ursuline Sr. Dorothy Kazel and laywoman Jean Donovan are inscribed, in stark uniformity with others who died, on a stunning, black granite monument, modeled after the Vietnam Veterans Memorial Wall in Washington, in the capital’s Parque Cuscatlán. The women might have appreciated the equality of billing.

Ford once remarked while serving in Chile that “the days of martyrdom are over,” and that the daily giving of self to the poor is the real work, Maryknoll Sr. Carol Marie McDonald recalled.

Jane Toth, a former Maryknoll sister from Cleveland, said the wall “speaks to the enormity of what happened here.”

About 40 participants from throughout the United States and as far away as Bolivia and China participated in a three-day pilgrimage organized by the Maryknoll Sisters of El Salvador; 55 traveled with the SHARE Foundation for a slightly longer stay.

They visited such holy sites as Santiago Nonualco, at the time a remote grassy area off a dirt road where the four women’s bodies were discovered by residents who heard gunfire the night of Dec. 2, 1980. Today, under an old tree, a simple monument marks the spot where the women died and “God received them in his kingdom.”

A Mass and commemoration service at Santiago Nonualco on the anniversary was alternately solemn and celebratory, with music and testimony from Salvadorans, and calls from Fr. Paul Schindler, a U.S. priest working in El Salvador, to “be living Gospels ... saints for our times.”

During a visit to Immaculate Conception Parish in the coastal town of La Libertad, where Kazel and Donovan lived and worked, area youth performed a musical and dance celebration of their lives.

Ursuline Sr. Maureen Grady of Cleveland, who lived and worked with Kazel, said her friend loved parties. “She is here with us today, and is enjoying every moment of this gathering,” Grady said. “She would have said, ‘How good it is to love God and each other. Go and live this way and be joyful, as I was.’ ”

But the difficulty of the war sapped joy from many days back then. Schindler recalled the Sunday in late 1980 when his sacristan and a young man the priest had raised from an orphan were shot to death in the courtyard below the women’s second-floor apartment at Immaculate Conception. The women worried that their staying would prompt more targeted killings of church workers. They also felt compelled to continue their work.

At San Antonio Los Ranchos, pilgrims placed flowers at a river where a vehicle driven by Maryknoll Sr. Carla Piette overturned in a flash flood on Aug. 23, 1980, as she drove herself, Ford, two seminarians and a war prisoner late at night. Her body was found eight miles away the next day near the town of Chalatenango. As they processed to a nearby church, pilgrims, sang “Lord of the Road,” a song she’d composed and that she and Ford sang while shuttling priests to far-flung outposts and war refugees to safe houses. An elder from the town, 75-year-old Teodora Franco Ramírez, who lost her husband in the war, plucked rocks from the river and handed them to a group of Maryknoll affiliates from Guatemala City, “to help deepen your faith,” she said.

At the cemetery in Chalatenango, pilgrims placed flowers at the graves of Ford, Clarke and Piette, as a sun-weathered Salvadoran gardener watched silently nearby. Clarke’s nephew, Peter Keogh of New York, told the group that the gravesite was “a hard place to come to,” but that having others with whom to celebrate the women’s lives “makes the 30th anniversary that much more special.” He was joined by his mother, Julia Clarke Keogh, Maura Clarke’s sister; and his nephew, Fitzwilliam Anderson, all of New York.

After the women’s murders in 1980, Maryknoll Sr. Melinda Roper, who was then president of the Maryknoll Sisters Congregation, led her community to forgive the killers. The congregation dispatched a sister to the trial of the five Salvadoran national guardsmen who were convicted of the murders in 1984, to tell the men they’d been forgiven. But the opportunity didn’t present itself until a decade later, according to Maryknoll Sr. Mary Annel, who founded and runs an AIDS prevention program in El Salvador.

Annel said that in 1994, on a visit to a men’s prison to discuss AIDS prevention with inmates, a prisoner slipped a note to her, revealing himself as one of the condemned national guardsmen who had killed the women. “I was able to deliver the message, that we as a community forgave them,” she said. “He subsequently took our course. He is still in jail.”

Sr. Rebecca Macugay, vice president of the Maryknoll congregation, said her own grief and sadness about the women’s deaths gradually has turned to peacefulness, out of knowing “their death wasn’t in vain,” she said.

She said the women were motivated by love, not fear, and “were free to fall in love” with everyone they served.

Macugay said she also believes that it may be time to finally let the women go -- while taking inspiration from them -- to live in the present and serve today’s poor.

[Cheryl Wittenauer is a writer based in St. Louis, who accompanied the Maryknoll Sisters’ pilgrimage in El Salvador.]

First cathedral for Mother Teresa is consecrated in Kosovo