by Cindy Wooden, Catholic News Service
World
This article appears in the Francis in Thailand and Japan feature series. View the full series. 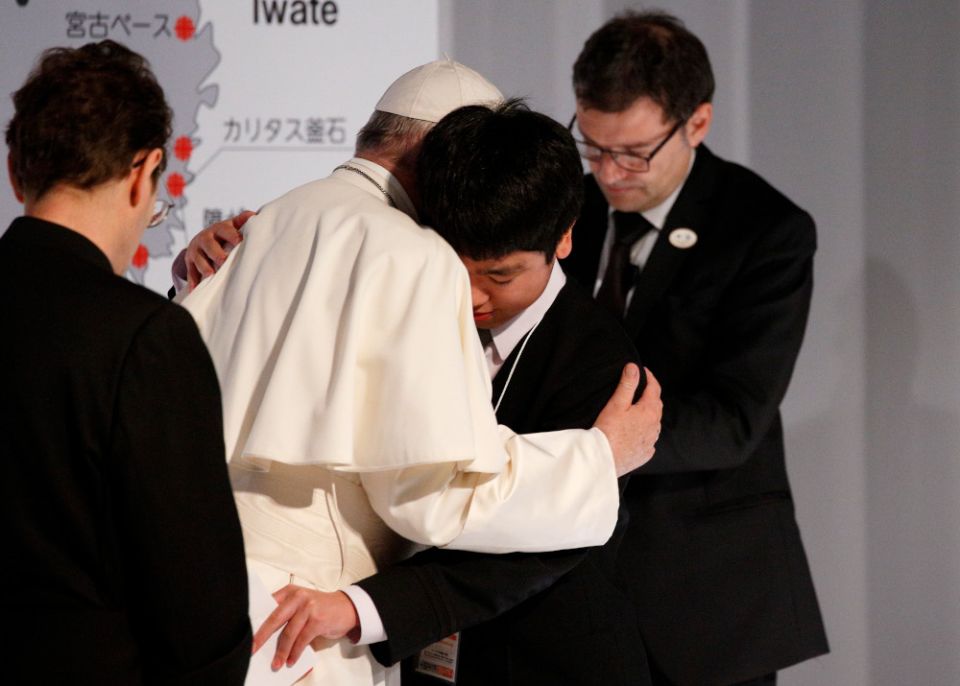 Tokyo — While not adopting the Japanese bishops' opposition to nuclear power plants as his own, Pope Francis insisted the 2011 meltdown at the Daiichi Nuclear Power Station in Fukushima raises serious questions.

"It is important at times like this to pause and reflect upon who we are and, perhaps more critically, who we want to be. What kind of world, what kind of legacy, will we leave to those who will come after us?" the pope said Nov. 25 during a meeting with survivors of Japan's 2011 "triple disaster."

The March 11, 2011, disaster was a domino-effect of events: a powerful earthquake triggered a tsunami that flooded the nuclear power plant, leading to a meltdown. The disasters caused the deaths of more than 18,000 people and left tens of thousands more homeless. More than eight years later, some 50,000 people are still living in temporary accommodations.

At the meeting in Tokyo organized by Caritas Japan, Francis began with a silent prayer for the victims and a prayer of thanksgiving for all those in Japan and around the world who rushed to help. But he also echoed the survivors' call for continuing support and urged the Japanese, and all people, to learn from the disaster.

"Our age is tempted to make technological progress the measure of human progress," the pope said. But for its survival, humanity needs a different priority, "a different vision, one that fosters reverence for the gift of life and solidarity with our brothers and sisters in the one multiethnic and multicultural human family."

And, he said, "as we think about the future of our common home, we need to realize that we cannot make purely selfish decisions, and that we have a great responsibility to future generations. Consequently, we must choose a humble and sober way of life that recognizes the urgent realities we are called to face."

People need to feel safe, Francis said. "This involves, as my brother bishops in Japan have emphasized, concern about the continuing use of nuclear power; for this reason, they have called for the abolition of nuclear power plants."

The pope did not make their call his own. But, citing the three victims who spoke at the event, he said there is a need "to find a new path for the future, a path rooted in respect for each person and for the natural world."

Matsuki Kamoshita had told Francis he was 8 years old when the disaster struck; he and his family were evacuated to Tokyo, but now the government is not paying for temporary housing, he said.

Still, there is so much fear. Kamoshita told the pope, "I have been desperately staying away, but many people have been forced to return to the contaminated area. But radioactive materials that have fallen all over eastern Japan are still emitting radiation after eight years. It will take many times longer than my lifetime to restore the contaminated land and forests."

After he spoke, he gave Francis a tight hug and began weeping. The pope consoled him.

Canadian Father Charles-Aime Bolduc, a member of the Quebec Foreign Mission Society and pastor of a parish in Fukushima, also met the pope at the event. His confrere, Father Andre Lachapelle, 76, apparently had a heart attack and died while trying to escape the rising waters of the tsunami.

World | Pope: Reverence for life, not profit, must determine use of nuclear power

Communion, not competition, is key to job growth, pope says