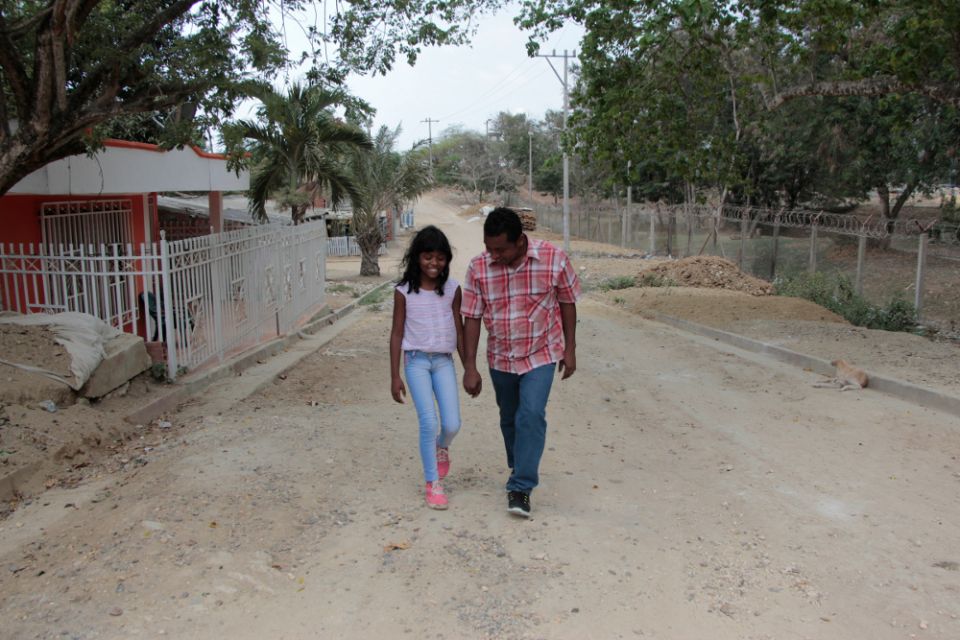 A father and daughter walk near Cartagena, Colombia, in this 2015 file photo. Pope Francis' September visit to Colombia will highlight the inequality in Latin America, which has some of the highest income disparities in the world. (CNS/courtesy Unbound.org)

Lima, Peru — When Pope Francis visits Colombia in September, he will take his message of mercy and reconciliation to Cartagena, a city that still bears scars of its painful history as a slave port. And he will walk the streets where another Jesuit, St. Peter Claver, put that message into practice four centuries ago.

Canonized in 1888, St. Peter Claver is now considered the patron saint of human rights in Colombia. But although the country abolished slavery in 1851 and passed a law prohibiting discrimination in 1993, racism persists.

The same is true in other Latin American countries. Although about half the population of Brazil is of African descent, Afro-Brazilians make up a disproportionate share of the poor population, according to the 2010 census. Their salaries averaged one-half to one-third those of white Brazilians.

On his last day in Colombia, Sept. 10, Francis will pray the Angelus outside of the sanctuary of St. Peter Claver. The building where the missionary welcomed slaves, and which now houses the saint’s relics, has also served as a school and a hospital.

After private prayer time in the sanctuary, Francis will meet with fellow Jesuits.

Some people wonder if Francis will ask forgiveness for the church’s long acceptance of the slave trade in the Americas. Hernández said he hopes the pope will speak out against modern forms of slavery, including human trafficking and slavery to money and a consumer society.

Latin America has some of the highest income disparities in the world. Tourists flock to the Caribbean city’s beach resorts, which contrast sharply with the poverty in which most of the city’s large Afro-Colombian population still lives, said Fr. Carlos Eduardo Correa, provincial superior of the Jesuits in Colombia.

“In Colombia, there are still many human rights violations, especially of Afro-Colombian, indigenous and poor communities, particularly in cultural, economic, social and environmental rights, and rights to education, health and work,” Correa said.

By the time the young Claver arrived in Cartagena from Spain in 1610, the slave trade was already booming. More than 78,000 African slaves arrived between 1570 and 1640 — some 10,000 a year. By some accounts, slaves made up half the population of Cartagena at the time.

After five years of studies in Bogotá, he returned to Cartagena, where he was ordained in 1616. Referring to himself as “the slave of slaves,” he joined another Jesuit, Fr. Alonso de Sandoval, who was outspoken about the injustice of slavery, and continued that ministry after his companion was transferred to Peru in 1617. 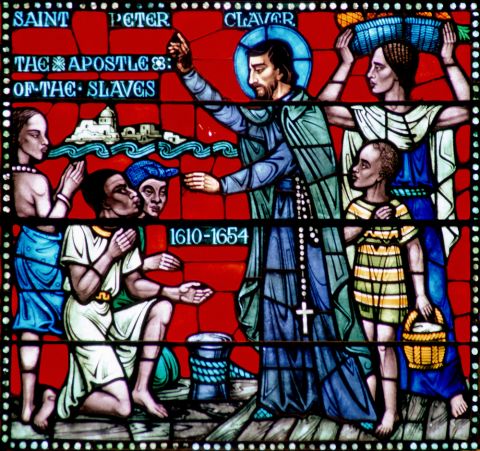 At a time when the Catholic Church did not speak out against enslavement of Africans in the Spanish colonies, and when even some Jesuit superiors criticized his ministry, Claver cajoled alms from the wealthy and used them to buy food and medicine.

He met the traffickers’ ships at the port, going first to aid children and the sick with the help of slaves he knew in Cartagena, who spoke the new arrivals’ languages. His labor of humanitarian care and catechesis continued in the squalid houses where traders housed the slaves until they were sold or shipped to another port.

Francis’ visit to the place where Claver lived, worked and finally died in 1654, after suffering the same diseases that afflicted the people to whom he ministered, will be a reminder that human rights are crucial for the country’s peace process after decades of civil war.

Peace and reconciliation, Correa said, will be possible “only when people recognize every person’s dignity and every person’s importance as a human being, as St. Peter Claver did.”

White Catholics must lead the way to end white supremacy