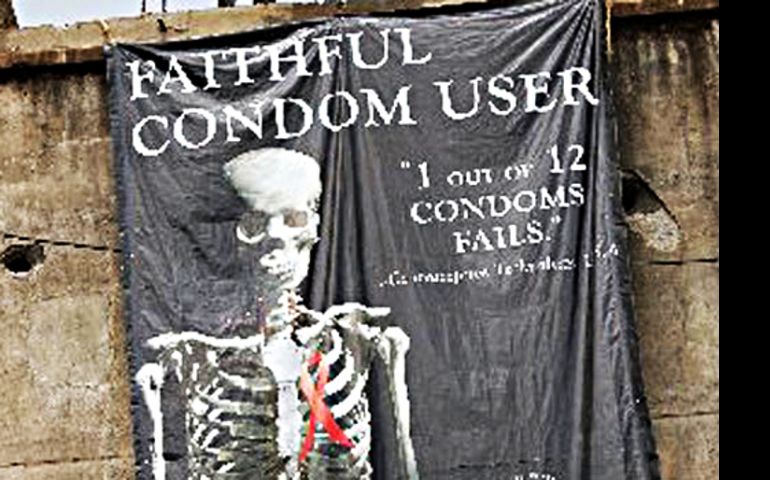 NAIROBI, Kenya — On the southern shore of Winam Gulf on Lake Victoria in western Kenya lies the evergreen, dynamic town of Homa Bay.

It is the capital of Homa Bay County, with a population of approximately 960,000. Out of this population, 150,000 people live with HIV/AIDS. And according to the National AIDS Control Council and the National AIDS and STI Control Programme, 12,940 people in Homa Bay were newly infected in 2013, the highest rate in Kenya.

Because Homa Bay has the highest prevalence of HIV in Kenya, it also has a high concentration of local and international aid agencies seeking to reduce new infections.

One such agency is Medecins Sans Frontières. Since June 2014, MSF and Kenya's health sector have been running a program in the region aimed at curbing the HIV epidemic and reducing mortality linked to HIV/AIDS. The program focuses on reinforcing HIV prevention, detection, treatment and care at all levels. Use of condoms for the prevention of new infections is one of their key strategies.

"We have partnered with other organizations and the ministry of health in promoting the use of condoms as a protective measure. If you go to the ministry just a few meters from our offices, they will tell you how much we have succeeded so far," said Janthi Price, an MSF project coordinator. "But I want to insist that use of condoms alone will not help the situation. Other measures have to be taken simultaneously."

The aid agencies and HIV/AIDS activists are also getting support from unusual quarters in their condom-use campaigns.

A former nun in Kenya, Caroline Osogo, is spearheading a campaign on the use of condoms among the youth as a way of preventing the spread of HIV/AIDS in Homa Bay County.

The Roman Catholic church has opposed use of condoms to prevent the spread of HIV/AIDS and other sexually transmitted diseases because of their contraceptive capabilities. But Osogo, who was excommunicated from her congregation 13 years ago and still dons the habit of the Franciscan Sisters of St. Joseph, has openly advocated for the use of condoms among the youth in the HIV "hotspot" region.

"I tell them to use condoms because I have gone around the village, and what I have seen is very disturbing," Osogo said. "HIV/AIDS has cleared families, and all we have left are graves of parents and orphaned children fending for themselves. With no breadwinners, the children are turning to prostitution due to poverty. In the process, they also die of HIV/AIDS. The church has to look at the issue differently. Even priests and nuns are dying of HIV/AIDS."

A few weeks before Pope Francis' visit to Africa in November, Osogo urged the pope to lift the Catholic church's ban on the use of condoms. She argued in the local press that relaxation of the church's strict objection to condom use would be a milestone in the fight against HIV/AIDS in Africa.

Osogo's attempt to pressure the church to reconsider its position is not something new. For the last decade, aid agencies, activists, and officials in Kenya's health sector have campaigned for universal condom use to curb the spread of HIV.

Kenya is one of the six HIV "high-burden" countries in Africa. At the end of 2013, about 1.6 million people were living with HIV.

Pope Francis faced a question about the church's teaching on the use of artificial contraception from a journalist Nov. 30 aboard the papal plane from Bangui, Central African Republic, to Rome. The journalist asked if the church should consider changing its stance on the issue, particularly on the use of condoms, given the continuing spread of HIV/AIDS in Africa.

"The question seems too small to me," the pope replied. "It seems to me also like a partial question."

"The morality of the church is found on this point, I think, in front of a perplexity," he said. "Fifth or Sixth Commandment? Defend life, or that sexual relations be open to life? This is not the problem. The problem is bigger."

Pope Francis said the question made him think of what they asked Jesus one time: "Tell me, master, is it licit to heal on the Sabbath?"

"Malnutrition, exploitation of persons, slave work, lack of drinking water," he said. "These are the problems."

"I do not like to descend into reflections that are so casuistic when people are dying," he continued. "I would say to not think if it is licit or not licit to heal on the Sabbath. I say to humanity: Make justice, and when all are healed, when there is not injustice in this world, we can speak of the Sabbath."

Osogo, however, said she thinks the pope will reconsider the position and perhaps relax the church's ban on the use of condoms.

"The pope might not have said it in front of the cameras in Kenya, but I know he is thinking about the issue because he has heard of the news from the continent, news of how Africans are dying of HIV/AIDS. It is just a matter of time. Use of condoms will save Africa from the scourge, and the pope knows that well," she said.

Her advocacy and that by Kenya's health sector, in conjunction with aid agencies and HIV/AIDS activists, have posed a big challenge to the Catholic church, whose stance on the issue remains abstinence before marriage and faithfulness among married couples.

A few days after Pope Francis left Kenya, a campaign against the use of condoms picked up. Human Life International — a Catholic pro-life nongovernmental association that works to protect life and family structures through education, outreach, advocacy and service — erected a billboard in Nyeri County in Central Kenya with a message warning that condoms are not effective in preventing the spread of HIV/AIDS.

"Faithful condom user — one out of 12 condoms fails," read the billboard, which elicited a heated debate between the Catholic church and HIV/AIDS-prevention activists.

A week later, the billboard was pulled down. Raphael Wanjohi, director of HLI Kenya, said the National AIDS Control Council took down the billboard because HLI won't stop its anti-condom campaigns.

On top of a hill overlooking Lake Victoria, a third of a mile from Osogo's home, sits St. Paul's Catholic Church. The priests here have spent considerable time preaching abstinence to young people as the only way to lower the high prevalence of HIV/AIDS in the region.

"We hold meetings with the youth every Saturday evening. We preach abstinence as a way of preventing HIV/AIDS, which is killing many in this region," said Fr. John Ojwang, a young assistant priest in charge of the youth at St. Paul's Catholic Church. "But when they go out, they meet officials from the health sector and people like ex-nun Caroline Osogo dishing out condoms. They have condom dispensers in every corner of the town."

Ojwang said the church faces a difficult time in trying to maintain its official stance on the use of condoms. He said young people in the region are frequently dying from HIV/AIDS, but he is convinced the use of condoms is making the situation worse.

"It's harder to convince the senior youth to shun premarital sex while there is so much campaigning on use of condoms," Ojwang said. "The younger ones are easy to convince. We are, however, not giving up. As they preach condoms out there with dispensers at every corner, we in the church are telling the youth to abstain."

Bishop Phillip Anyolo, chairman of the Kenya Conference of Catholic Bishops, said that the Catholic church's rule on the use of condoms stands, and the church in Kenya wouldn't have it otherwise.

"Even those using condoms are dying. It is a false protection," Anyolo said. "It promotes promiscuity. The church does not encourage it. It is high time we restored the Catholic church's teachings. Encouraging sin to overcome sin is not right."

He said the church's way remains abstinence for those not married and fidelity among married couples. He said those are better ways of limiting the spread of the epidemic than the use of condoms.

"We will continue to advocate for that," he said.

[Lilian Muendo is a freelance journalist based in Nairobi, Kenya.]

LGBT-friendly parish has long history of ministry to homeless, sick

US AIDS official warns against stigma against gays in Africa