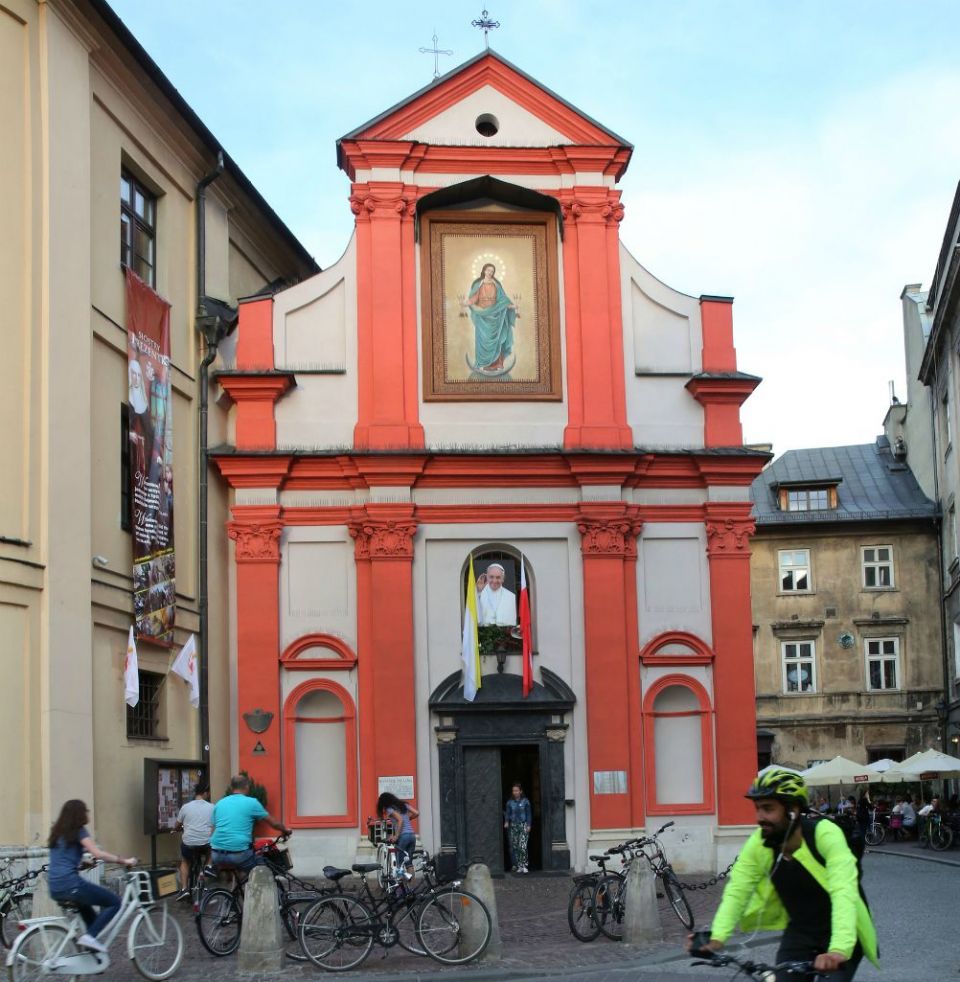 Images of Mary and Pope Francis are seen outside a church in 2016 Krakow, Poland. (CNS/Bob Roller)

A newspaper editor and columnist, a Polish Marian priest who was silenced in 2011 after he got crosswise with conservative politicians and the church hierarchy, is being allowed to speak again.

And he has been, criticizing the cozy relationship between Poland's ruling right-wing Law and Justice Party and the Catholic Church and denouncing the country's anti-migration policies.

In media interviews since his silencing was lifted in July, Fr. Adam Boniecki, 83, a confidant of Pope John Paul II, has been outspoken in defending the need for church-state separation and a more humane policy of welcoming refugees from conflicts in the Middle East.

Most experts agree church support played a key role in the decisive Law and Justice Party victory in the 2015 national election. In turn, the Law and Justice Party is committed to defending the Catholic identity of a homogeneous Poland. In a nation with a population of 38 million, 92 percent identify as Roman Catholic.

According to Marcin Zyla, deputy editor-in-chief of the liberal Catholic weekly, Tygodnik Powszechny, priests who espouse right-wing and xenophobic views were allowed to preach unencumbered during the six years when Boniecki was muzzled, which demonstrates the bias against Boniecki, who was the editor of the paper and writes a column for it.

For example, the governing Law and Justice Party has formed strong bonds with Redemptorist Fr. Tadeusz Rydzyk, head of Radio Maryja, an influential radio, TV, and print media empire whose anti-Semitic broadcasts have been condemned by the U.S. State Department  and was the subject of serious concern by the European Parliament for its anti-Semitic expressions.

Boniecki says he worries that an increasing number of Poles don't see the danger posed by Rydzyk. Boniecki is also deeply concerned about the hateful divisions he sees within Poland, including those engendered by Radio Maryja.

"Why is it that there's so little Good Gospel spirit in a nation that's considered itself Christian for more than a millennium," he wrote in a recent column in Tygodnik Powszechny.

In 2011, Boniecki was heavily criticized by church leaders for his support of liberal politicians and causes. At the time, Bishop Wieslaw Mering of Wloclawek accused Boniecki of "spreading confusion among the faithful," and representing "a wolf among sheep, rather than a shepherd."

Criticism of Boniecki came to a head when he defended efforts by the liberal, anti-clerical Palikot's Movement to have a cross removed from Poland's lower house of parliament, the Sejm. After that, his religious order, the Congregation of Marian Fathers ordered him to stop speaking in public.

On the issue of refugees, Boniecki has placed himself in opposition to government policy and public opinion. The Law and Justice Party was swept to power in 2015, the height of Europe's migration crisis, when tens of thousands of refugees from the Middle East rushed European borders. Seventy percent of Poles don't want any Muslim refugees, according to a national poll in May 2017 by the Public Opinion Research Center, a non-profit public foundation.

"If I say something about refugees during a sermon," said Boniecki, "Someone will always come to the rectory and scream at me."

About the controversy that led to his silencing, Boniecki told the Polish website Onet that "hanging the cross [in parliament] does not prove the presence of Christianity."

"Let us also remember that the Sejm itself is not always in harmony with the cross," he said. "Its presence suggests church involvement in the state."

Asked if he had any regrets, Boniecki said, "I surely have not changed my views today."

"What I said at that time was in line with the Gospel … perhaps I should have been more clear. … Today I would try to say it clearer, that's the only thing I regret."

A 'time of crisis' for Poland's Catholic Church