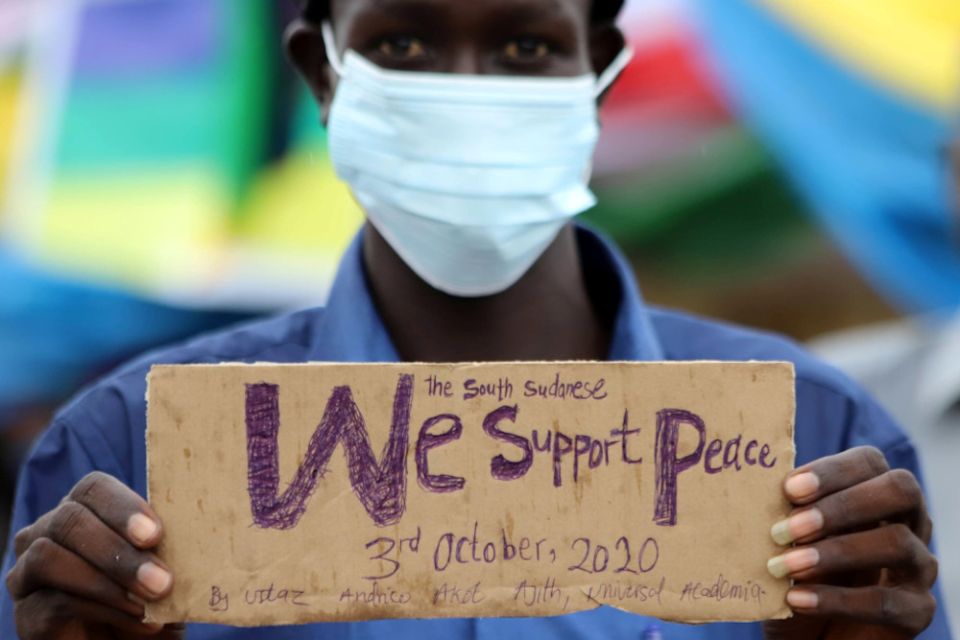 A civilian holds a placard in support of peace as he celebrates the signing of peace agreement between Sudan's transitional government and Sudanese revolutionary movements to end decades-old conflict, in Juba, South Sudan, in this Oct. 3, 2020, file photo. (CNS/Reuters/Samir Bol)

"We continue to suffer from the effects of the pandemic, internal conflicts and various forms of violence that limit our meetings and celebrations," Bishop Edward Hiiboro Kussala of Tombura-Yambio, South Sudan, said in a message to mark the anniversary July 9.

"It is also different because we must strive to recognize more consciously that all people are created equal and are endowed by God with the inalienable rights of life, freedom and the pursuit of happiness," he said. 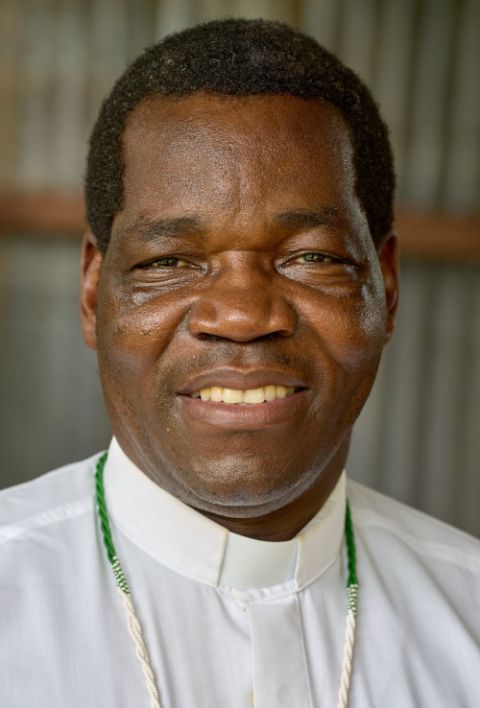 Since voters opted for independence from Sudan in 2011, the east African nation has experienced repeated conflicts among competing armed militias, political instability, dire food shortages, and soil degradation caused by deforestation and water contamination that has led to rising incidences of malaria, typhoid and water-linked diarrheal diseases.

Numerous attempts to end the conflicts and respond to the needs of struggling families have failed.

As Catholics, Kussala said, "We must pray and work for a nation in which peace and justice reign for all. We are called to help shape our nation to help preserve these rights."

The bishop also noted that this year's independence celebrations were special as they were capped by the visit of Cardinal Pietro Parolin, Vatican secretary of state, who was in the country's capital, Juba, for three days of prayer and meetings.

Pope Francis had planned to visit South Sudan and Congo in early July, but he postponed his visit because of continuing problems with his knee.

Parolin told audiences that the pope still planned to visit South Sudan in the future.

In a message marking the independence anniversary, the U.N., through its mission in South Sudan, reiterated its commitment to peace the country.

"The journey out of civil war has not been easy and the upcoming months will be critical for South Sudan, as the transitional period approaches its end in February 2023," the message said. "Now is the time for national leaders to redouble their efforts to agree on a roadmap — with clear benchmarks, timelines, and priorities — to pave the way toward free, fair and credible elections. This is an opportunity for the country to celebrate its common values and to rally together for nation-building."

The U.N. mission continues to promote a safe and secure environment for civilians, facilitate the delivery of humanitarian aid, and support the return of displaced families and refugees.

Peace in the Holy Land -- an elusive dream

Amid protests in Colombia, Catholics emphasize they're on the side of the poor