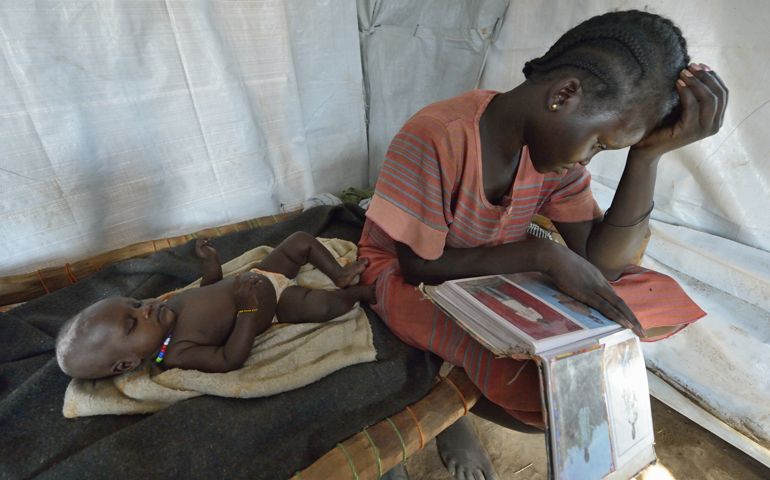 Nyanthem Mayol stares at photos of her relatives April 3 while her baby daughter, Sara, sleeps at her side in a temporary shelter near Ajuong Thok, South Sudan, to where they fled after fighting broke out in their home town of Bentieu in late 2013. (CNS/Paul Jeffrey)

Church leaders in South Sudan have called on their country's warring groups to stop fighting and begin serious peace negotiations.

In a pastoral statement released Sunday in Juba, nearly four months after fighting broke out in the newly independent African country, officials of the South Sudan Council of Churches lamented that face-to-face negotiations have yet to begin.

"We are disheartened by the tendency of our leaders to use war and violence as a means of settling political differences, ascending to power or retaining power. We are saddened by the delay and the lack of progress in the peace talks in Addis Ababa and we are horrified by the ongoing armed mobilization by the conflicting parties in and outside the country and by the prospects of a looming and escalating war rather than peace," the statement said.

Archbishop Paulino Lukudu Loro of Juba was among the nine church leaders who signed the statement.

The conflict, which builds on decades of unresolved ethnic and political tensions within the ruling party, has produced more than a quarter million refugees and over 800,000 internally displaced people. Of those, almost 63,000 people are living in eight United Nations bases around the country. Most of them are members of the Nuer tribe who are afraid of reprisals from members of the dominant Dinka tribe.

At the same time, South Sudan hosts more than 500,000 refugees from fighting in Sudan and other neighboring countries.

In their statement -- titled "I am my Brother's Keeper, Stop the War Now!" -- the church leaders noted that the rainy season has begun in much of the country, leaving the displaced farmers unable to plant their fields. According to the United Nations, the failure to plant now means 7 million people will face the risk of hunger.

Mediated by a group of neighboring governments, peace talks began in the Ethiopian capital in January. The talks produced a cease-fire Jan. 23, yet fighting continues to rage in several areas of South Sudan. Mediators have proposed that a regional army be formed to serve as peacekeepers, but little progress has been made in forming such a group.

The United States has criticized the continuing presence in the country of Ugandan troops, who played a key role in defending Juba and other areas from rebel attacks, yet Ugandan military officials said last week they would not be leaving any time soon.

Catholic representatives have participated in an ecumenical delegation that has lobbied the peace talks, but church leaders say they are frustrated that no one seems to be listening. Some would prefer a more direct role.

"We could make a difference in this situation, but we are not directly involved. We find ourselves outside, with the rest of the community," Bishop Eduardo Hiiboro Kussala of Tombura-Yambio told Catholic News Service March 28.

"It's a paradox. The two people fighting and destroying the country are the same two engaged in the peace talks. These are the people to whom we're leaving the destiny of the country. The church isn't happy about that. The church should be involved in the process, the bishop said.

"We are not seeking any position. We only want to see that South Sudan is stable and peaceful. No one should be scared of us. But some people are perhaps afraid of our values, afraid that we'll come in talking about human dignity and rights. So they'd rather keep us out of there," he added.

The council of churches statement called for the peace talks to expand in scope beyond the warring parties.

"We want see an inclusive dialogue from all stakeholders to seek honest views from all sectors of society in order that the South Sudanese people own the process and the expected peace agreement," the church leaders said.

Arguing that the current crisis is "a golden opportunity for us to address all that was not put right" since 2005, when decades of civil war came to an end, the leaders said they wanted to see a country "where the rule of law and the constitution are respected by all and where the sovereignty of the people is paramount and their will is respected."

They said they wanted a country "where leaders listen to people and serve the people rather than wait to be served. ... (and) where leaders equitably share the national resources with the people and not simply accumulate these resources for themselves and their relatives."

Acknowledging that ethnic and tribal conflicts contribute to the current crisis, the church leaders also called for a rethinking of how South Sudan's government is structured.

'No Time to Die' and the battle between good and evil