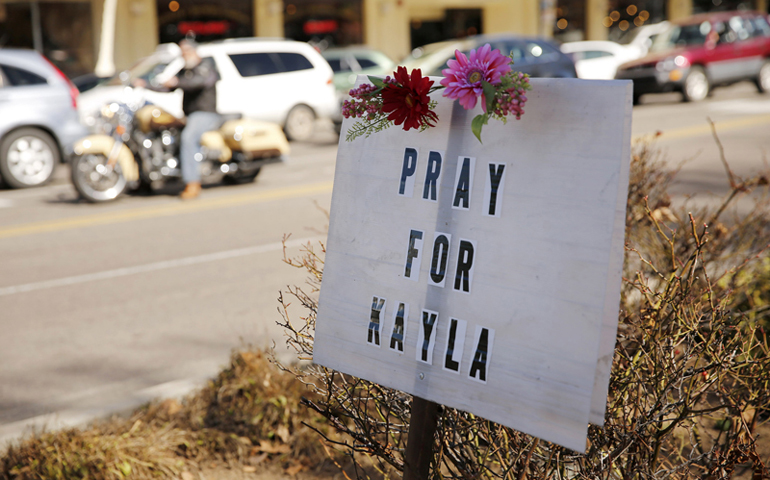 A sign for Kayla Mueller along a main street in Prescott, Ariz., on Tuesday (RNS/Reuters/Nancy Wiechec)

The risk of foreign aid work, especially for young people, has again been thrust into the national spotlight after the death of 26-year-old Kayla Mueller.

Mueller, a foreign aid worker, was confirmed dead Tuesday after being taken hostage by Islamic extremists in 2013 in Syria.

Even as aid organizations have improved security protocols over the past several years, workers can be placed in war-torn areas where safety cannot be guaranteed, said Abby Stoddard of Humanitarian Outcomes, a research and policy group for humanitarian agencies.

And those who feel compelled to take part in easing human suffering abroad may put safety second.

According to data compiled by Humanitarian Outcomes in its 2014 security report, there was a 66 percent increase in violence against civilian aid workers in 2013. Stoddard said the increase can be attributed to escalating conflicts in Syria and South Sudan.

“There are only a handful of countries where there’s a great deal of violence taking place against aid workers. [It’s] not across the board ... but five or six hot spots,” she said. “Those would be Afghanistan, Sudan, Somalia, Pakistan, South Sudan and, now, Syria.”

“It’s a huge issue. I can guarantee you that organizations are not putting their workers through enough security training,” Charny said to the news organization. “I think it is very spotty.”

Stoddard said many of the workers in the most vulnerable areas tend to be in their 20s and 30s.

“You get the younger aid workers paying their dues and working in the most complicated and dangerous places,” she said. “Seasoned professionals gravitate elsewhere.”

Larissa Fast, assistant professor of conflict resolution at the University of Notre Dame, said, “If you have family or children [you’re likely] less willing to actually go to these places.”

Grace Williams, 28, said that before she left the U.S. for a rural area of Guatemala in 2010, the Peace Corps held language and training programs on topics ranging from health-related issues to being attacked or robbed.

“As things got worse in my country, and things became more violent, they kept adjusting the safety programs and offering more guidance,” Williams said.

After people were robbed and threatened with machetes and guns, she said, she and others were moved to safer areas with access to airports.

Smaller organizations might not have the resources to provide adequate training, said Fast, so workers need to be proactive and get the security training themselves.

“I think a lot of times people don’t have a real sense of the actual danger they’re in, especially in a place like Syria,” Fast said.

In 2012, Mueller traveled to the Turkey-Syria border to work for aid groups, including Support to Life and the Danish Refugee Council.

It’s not clear what organization, if any, Mueller was with at the time she was captured while traveling to a bus station from a Doctors Without Borders hospital in Aleppo, Syria.

Stoddard said many aid workers are most vulnerable when they are on the road. Data from the Humanitarian Outcomes report shows that from 1997-2013, nearly half of all attacks happened in transit.

[Daniel Gonzalez from The Arizona Republic contributed to this story.]