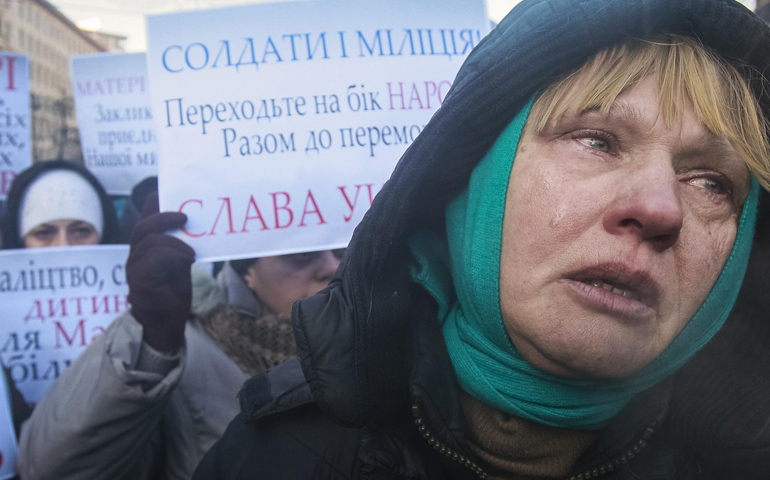 A woman cries as she and others appeal to Ukrainian police troops at the site of clashes with protesters Jan. 24 in Kiev. (CNS/Reuters/Gleb Garanich)

The ongoing strife in Ukraine is a citizen reaction to an "ideology of control and repressiveness, of control and domination," according to the archbishop of the Ukrainian Catholic Archeparchy of Philadelphia, who has been monitoring events in his ancestral homeland.

Based on his communications with Ukrainians living amid the turmoil, "I think there's that sense of joy, of jubilation that people have stood up for the truths that they want to, and it's just become so intolerable that they just have to voice their opposition," said Archbishop Stefan Soroka in a telephone interview Friday with Catholic News Service.

At the same time, he added, "there are those who voice their concerns that some will not exercise their self-restraint and may push this whole struggle into a situation where people are physically hurt much more than they already have."

One troubling offshoot of the tumult is that "the church being repressed for being able to speak for the rights of people," Soroka said, "just for offering pastoral services in Kiev," the capital. "Those priests and students are being persecuted for that."

The targeting of clergy is not limited to Ukrainian-rite Catholics in the onetime Soviet republic, he added, but also "the Latin(-rite) Catholics; it's also to the Baptists, the Muslims, the Jewish population." He voiced his dismay at the Ukrainian government "limiting and controlling (faith) in the way it can be expressed."

Tensions about Ukraine's direction after it separated from the Soviet Union took the world stage nine years ago with the October Revolution, which forced a revote in a presidential election.

Yulia Tymoshenko, an October Revolution figure who served as prime minister for nine months following the October Revolution and for a second, longer term later in the decade, was found guilty of abuse of power and embezzlement in a trial after she lost a 2010 election for the presidency to current President Viktor Yanukovich. Her imprisonment in what many regarded as a politically motivated trial resulted in protests in Kiev.

In November, Ukraine seemed poised to join the European Union, but Yanukovich instead signed a similar deal with a Russian-led common market of former Soviet states. Violent clashes erupted Jan. 19 after new laws criminalized "slandering" of government officials and the wearing of masks or helmets at demonstrations. At least two protesters were killed in clashes with riot police in subsequent protests, and peace talks got underway shortly after news of the killings grew widespread.

"It's sad," Soroka said of the situation. "It's a country with very resourceful people, very educated people. Under the Soviet system, they really educated the people, but when it comes to education and good jobs, people are leaving the country and going all over the world."

It's that new worldview that makes the situation inside Ukraine so untenable, Soroka told CNS: "People are just fed up. They're coming back (to Ukraine) and saying, 'How come? In Spain you can do this, in the States you can do that.' ... It's no longer that acceptance of 'this has to be.'"

Many Ukrainian Catholics in the United States in in their fourth or fifth generation, having settled in coal-mining regions of their new country. Another large group came after the end of World War II. "The group of people most severely affected are the 'fifth wave,' the immigrants who have come in the past 10 years, have families, brothers, parents, sisters" still in Ukraine, Soroka said. "They're very concerned, very worried. They probably have the first-hand stories. One was telling me they (the government) were cutting back on benefits and child care" as retribution for having taken part in protests."

His own parents immigrated to Winnipeg, Manitoba, from Ukraine in 1951; he was born there later that year.

The archbishop was gratified that talks were taking place to quell the situation. "I think we're all happy that there's talks going on. Will there be the patience that we like to see, and the tolerance to see those talks be successful? At least to this edge of violence and that this turmoil doesn't go any further," he said. "There's also a feeling of many people of, 'We've done all this before.' Will these words be empty? Will the reforms be genuine or not? They're struggling in their faith."

Soroka asked all priests in churches in the archeparchy of Philadelphia to lead Catholics in prayer at all services over the weekend "for a peaceful end to the tragic events and violence in Ukraine."

In a statement Thursday, the U.S. Ukrainian Catholic bishops expressed support for the church in Ukraine "in this time of duress."

The statement, to be read at weekend services, called "upon our brothers and sisters of all faiths in the U.S.A. to support those who show great courage in opposing those who would want to restrict the expression of religious and other basic human freedoms in Ukraine."

All members of the U.S. Catholic Ukrainian Church, it said, "express our complete confidence and support" for Archbishop Sviatoslav Shevchuk of Kiev-Halych, major archbishop of the Ukrainian Catholic church, and all clergy, religious and laypeople there "in their response of offering much needed pastoral care for the brave Ukrainian citizens voicing their opposition to the suppression of freedoms in today's society in Ukraine."

"Their response of love and understanding and nurture recalls for all the compassion which Jesus showed for the oppressed," the U.S. leaders said.

"We share the amazement of the civilized world in observing the harsh and brutal responses of the Ukrainian government to our church and to people expressing their concerns for the welfare of their neighbors and their nation," they said. "Reports of threats of intimidation by government officials ... cause all of us great concern for the welfare of all people of Ukraine, and particularly for all faiths and religious communities."