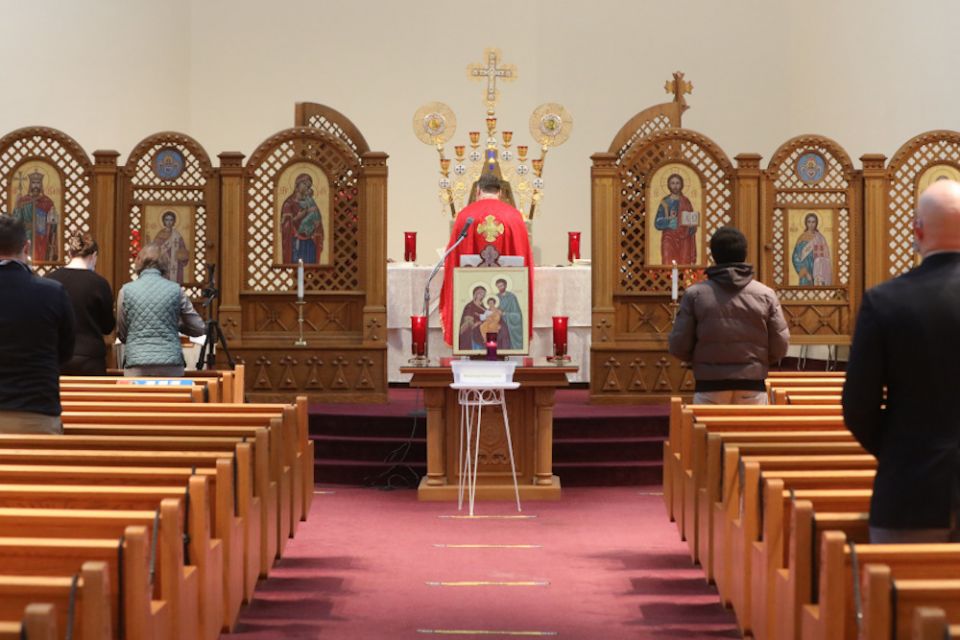 People pray during a morning Divine Liturgy at the Ukrainian Catholic National Shrine of the Holy Family in Washington Feb. 24 after Russia invaded Ukraine. (CNS/Bob Roller)

As war broke out in Europe Feb. 24, with Russia's early morning attacks on various parts of Ukraine, Catholics in the U.S. joined Pope Francis in prayers for the people of the East European nation and for peace.

"We join @Pontifex in calling on all people of goodwill to pray for the people of #Ukraine and for an end to war," said the U.S. Conference of Catholic Bishops in a tweet, hours after Russia launched rocket attacks into Ukraine and followed the aggression with a mobilization of troops and tanks into Ukrainian territory.

Some reported at least 40 casualties, others said they numbered in the hundreds early Feb. 24. The only thing for certain, said NATO Secretary-General Jens Stoltenberg, is that "peace our continent has been shattered."

We join @Pontifex in calling on all people of goodwill to pray for the people of #Ukraine and for an end to war. https://t.co/Nja6JlPydt

Coadjutor Bishop Louis Tylka of Peoria, Illinois, like many in the U.S., seemed to be ending Feb. 23 with news of the initial attacks on Ukraine, which took place early Feb. 24 local time in that country.

"Friends as we go to bed in central Illinois tonight, the people in Ukraine awake to war," Tylka tweeted around 11:30 p.m. Central time. "Let us pray for peace! Let us pray for an end to war! Let us pray that conflict can be resolved by dialogue — not violence! Lord we pray — bring peace to our troubled world."

Holy Cross Fr. John Jenkins, president of the University of Notre Dame in Indiana, in a Feb. 24 statement recalled a 2019 visit to Lviv, Ukraine, to present an award to Archbishop Borys Gudziak, now head of the Ukrainian Catholic Archeparchy of Philadelphia, for his "leadership of the first Catholic university established in the territory of the former Soviet Union."

Jenkins said that during the presentation of the award, he "spoke of the innumerable challenges in a society traumatized by war, genocide and political oppression and of the efforts of Archbishop Gudziak and his colleagues to bring to Ukraine healing and hope."

Ukraine, once part of the Soviet Union, under whose rule it suffered a famine that led to millions of deaths, voted for independence in 1991.

In a Feb. 23 interview with Relevant Radio, Gudziak explained how Russia's Vladimir Putin sees Ukraine as part of its territory, fomenting separatist movements in the country as he sought to absorb it.

But the archbishop called it a "ridiculous distortion of history and a negation of the human dignity of Ukrainians. Basically saying 'you don't exist, you didn't exist ... we're going to use force and subdue you.' "

He also spoke of what he sees as the consequences for people of faith.

"And this will be the case for the Ukrainian Orthodox Church, which also endured great persecution, and for other people of goodwill who want to express their spiritual lives, their culture, use their language," Gudziak said. "It's really devastating."

Notre Dame's Jenkins said the former oppressors of Ukraine were now known by another name "and are waging war under a different flag, but the trauma is no less today than in the past in this nation that has suffered far too much."

"Our friends in Ukraine are in need of healing and hope," he said in his statement. "We at Notre Dame stand in solidarity with all peace-loving people worldwide in demanding an end to this invasion of a sovereign nation. This unprovoked war is an international abomination and must stop now."

"Until it does," he said, "may God keep safe all of the innocent men, women and children who are currently in harm's way. The prayers of the Notre Dame family are with them."

He called all in his diocese to pray for Ukraine and reminded Catholics of Pope Francis' words: "to pray is to protest war in front of God. Never stop asking the Lord with faith and insistence for the end of conflict."

He said the Albany Diocese would fervently pray for the intercession of Mary Immaculate, to whom it consecrated, "that this military action quickly ends, that causalities are limited, and we pray for the repose of the souls of those who have been killed and those who will no doubt lose their lives in the coming days."

The Catholic organization Pax Christi USA in a statement condemned the invasion and urged "influential voices within the U.S. Catholic community to refuse to beat the drums of war."

Pax Christi also urged the international community to look to dialogue to solve the conflict and refrain from a military response.

"It should not be lost that in addition to Russian aggression, the expansion of NATO with the proliferation of bases, the continued manufacturing of weapons of war, and the reliance on security upheld by military power has played a significant role in the events building up to this current crisis," Pax Christi said.

"This war is additional evidence of the failure of policies predicated on the threat of violence to deliver the peace and dignity the human family deserves," it added.

For 20 million people, conflict added to drought means no food to eat