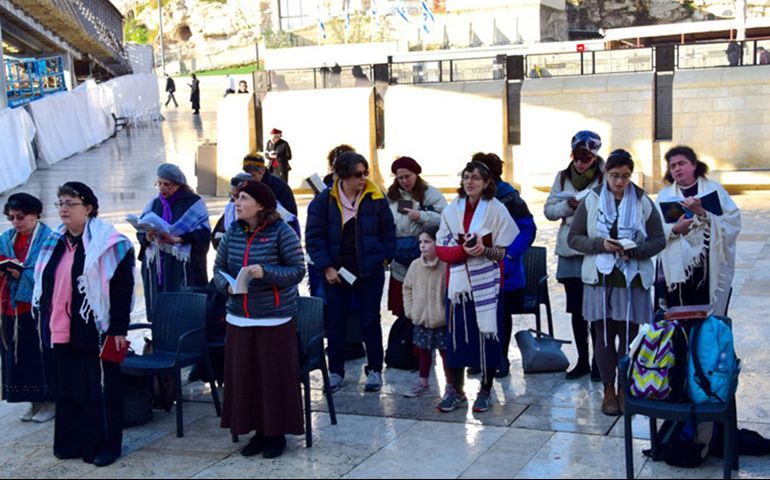 Members of the Original Women of the Wall say morning prayers at the Western Wall in Jerusalem on Feb. 3, 2016. (Photo courtesy of Shmuel Browns)

Jerusalem — American and Israeli Jewish leaders said they are frustrated the Israeli government appears to be backtracking from its groundbreaking commitment to create a government-funded egalitarian prayer space at the Western Wall and warned of a possible rupture in relations.

"There is a deep concern, bordering on disbelief, that this deal may not be implemented," Rabbi Rick Jacobs, president of the U.S.-based Union for Reform Judaism, told The Associated Press after an emergency meeting with Prime Minister Benjamin Netanyahu on Wednesday (June 1).

If the government doesn’t move forward with its pledge, it could cause "a rupture" with American Jewry, Jacobs added.

The agreement, which followed two years of negotiations between the heads of the Reform and Conservative streams of Judaism, the Jewish Federations of North America and the feminist prayer group Women of the Wall, was approved by the Israeli Cabinet on Jan. 31.

At the time, the leaders hailed it as the first step toward official government recognition of the rights of liberal Jews, whose clergy and institutions receive only token government funding and whose religious practices are not recognized in public spaces.

On March 31, Netanyahu imposed a 60-day freeze on the project to give him time to win approval from the ultra-Orthodox lawmakers in his coalition government who have threatened to bring down the government if the plan goes through.

"We won’t sit in a government that recognizes the Reform, not over the Western Wall, not for marriage and not for divorce," Interior Minister Aryeh Deri told Channel 2 news.

Rabbi Steven Wernick, CEO of the U.S.-based United Synagogue of Conservative Judaism, said the leaders thanked Netanyahu for "the time and energy he has put into reaching this agreement" but also expressed their "frustration" over the delay.

Rabbi Gilad Kariv, president of the Reform movement in Israel, expects an update from the prime minister within "a few weeks."

If the agreement is not implemented, Kariv said, his movement may encourage thousands of non-Orthodox Jews to conduct non-Orthodox prayer services next to the existing Western Wall prayer sections, which are run like an ultra-Orthodox synagogue, and to join Women of the Wall, a group that wants the right to pray and read from a Torah scroll at the wall.

Most controversially, Kariv said the Reform movement will petition the high court to divide the existing gender-segregated Western Wall into a third section for mixed-gender prayer.

“If the Haredim think the best place to promote peace at the wall is to bring Reform and Conservative Jews to pray 6 feet (away) from them, let it be,” said Kariv. “Haredim” is another term for ultra-Orthodox.