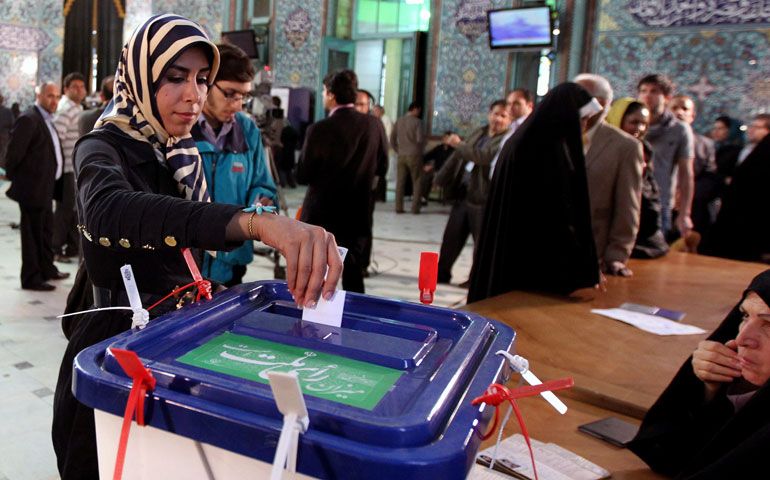 A woman casts her vote at a polling station during parliamentary elections in Tehran, Iran, May 4, 2012. (EPA/Abedin Taherkenareh)

While the outcome of the Iranian elections scheduled for June 14 may be hard to predict, it will make little difference as long as power remains firmly in the hands of Ayatollah Khamenei and other hard-line clerics. Indeed, while there are contending factions vying for the country's relatively weak presidency, the narrow ideological spectrum within which candidates are allowed to run for public office offers little hope for change -- at least through the electoral system.

Following the 2009 election, in which the incumbent right-wing president Mahmoud Ahmadinejad was declared the winner despite his apparent loss to the popular reformist Mir-Hossein Mousavi, the people of Iran rose up in a popular civil insurrection, which was brutally crushed.

While it is hard to guess how soon democracy will come to Iran, the government's theft of the election and subsequent crackdown -- shattering the illusion many Iranians still held that they could work within a rigged political system -- may have brought that day closer. The repression, corruption, economic injustice, imposition of ultraconservative social policies, and poor treatment of women and minorities has led to so much dissent that it has forced the regime to jail many of the Iranian Revolution's own leadership, including former Prime Minister Mousavi, former parliamentary leader Mehdi Karroubi, and prominent clerics.

Iran today is like Eastern Europe in the 1970s. The people are not yet at a point where they can bring down the regime, but the ideological hegemony that kept the system intact is gone. Just as Eastern European workers recognized that the system under which they were suffering bore little resemblance to its professed socialist ideology, Iranian Muslims -- even those who supported the Islamic Revolution in principle -- are recognizing that the "Islamic Republic" is actually neither.

While overt protests are rare, many thousands of tiny acts of resistance occur every day by Iranians who no longer recognize the legitimacy of the regime. It is only a matter of time before the people will again rise up and demand their freedom.

Following the 1980 Iraqi invasion and the subsequent nine-year war (during which the United States largely backed Saddam Hussein), the country entered its darkest totalitarian period. When the war ended and a less bellicose administration was in office in Washington during the 1990s, some significant reforms took place within the regime under the moderate president Mohammad Khatami and his allies. However, under the George W. Bush administration -- which saw the U.S. invade two countries neighboring Iran, arm Kurdish and Baluchi rebels, reject significant offers of concessions on the nuclear issue and other U.S. concerns in return for normal relations, refuse negotiations, label the country part of the "axis of evil," and overtly call for "regime change" -- ultraconservative elements were able to reconsolidate their power.

Early in his administration, President Barack Obama rejected the bellicose neoconservative ideology of his predecessor and committed the United States to multilateralism and negotiations, and the Iranian people were emboldened to rise up for their freedom. Subsequently, however, as U.S. policy has hardened, clamor for change both within and outside the system has largely been silent.

The pattern is clear: A reduction in outside pressure increases the prospects for change, while an increase in foreign threats strengthens autocratic elements.

The big mistake by the United States in Vietnam was failing to recognize that the power of the Vietnamese revolutionaries came through their ability to rally the nationalist sentiments of their people. Like the communist leadership of Vietnam, the Islamist leaders of Iran have been quite successful in appealing to nationalism when they feel their country is unfairly targeted. Indeed, Iranians are among the most stridently nationalistic people in the world.

Even Mousavi, Karroubi and other leaders in the Green Revolution support the current Iranian regime in its defiance of Western pressure regarding the country's nuclear program. Regardless of most Iranians' feelings about the regime, nationalist passions are inevitably stirred up as their country is placed under crippling economic sanctions over a nuclear program that has thus far been entirely peaceful. Even government critics note how nearby regional powers Israel, Pakistan and India -- which, like Iran, are in defiance of U.N. Security Council resolutions regarding their nuclear programs but have actually developed sizable arsenals of nuclear weapons -- are not being sanctioned and maintain close military and economic relations with the United States.

Iranians also observe how the United States spends nearly $900 billion annually on its military and military-related programs compared with only around $12 billion by Iran. Indeed, Iran's military budget is less than one-fifth that of the six pro-Western Arab monarchies on the other side of the Persian Gulf spend and substantially less than Israel or even the United Arab Emirates. Yet there is growing pressure on Obama to use military force to deal with the supposed Iranian "threat."

Obama continues to push for a diplomatic solution to prevent Iran from obtaining nuclear weapons, but he has not ruled out the use of military force. A large bipartisan majority of Congress has called on the president to use military force to prevent Iran from even developing the capability to produce nuclear weapons. Realizing that Obama probably won't launch a first strike himself, Congress is now pushing the administration to pledge to enter into a war with Iran in the event that Israeli Prime Minister Benjamin Netanyahu decides to ignore the advice of his top military and intelligence officials and launch an attack on Iran. Indeed, 87 senators have cosponsored a resolution calling on the United States to "stand with Israel and provide ... diplomatic, military, and economic support" in the event Israel initiates a war.

History has shown repeatedly that people -- regardless of their ideological orientation -- tend to rally around the flag if their country is under threat of attack. Current U.S. policy, then, only serves to strengthen the grip of Iran's autocratic rulers and weakens the ability of the opposition to mobilize for democratic change.

[Stephen Zunes is a professor of politics at the University of San Francisco.]

Plight of Arab Christians is an outgrowth of Western policies