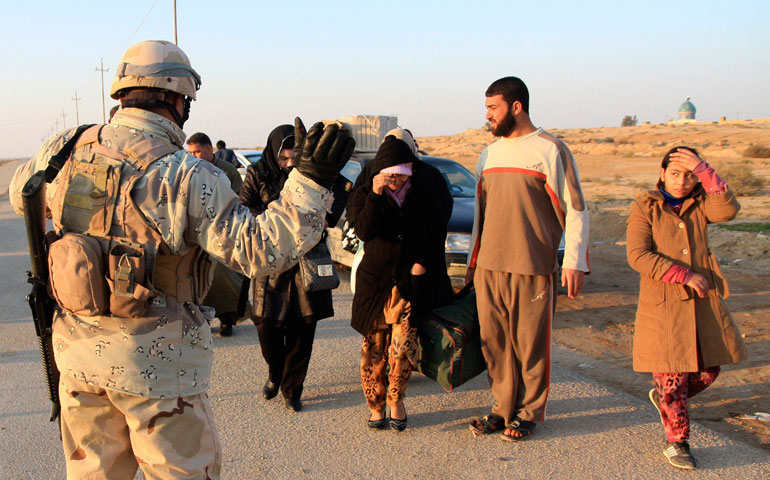 A member of Iraqi security forces stands guard at a checkpoint in Ein Tamarm, a town some 25 miles west of Karbala, Jan 6. (Reuters/Mushtaq Muhammed)

The tragic upsurge of violence in Iraq in recent months, including the temporary takeover of sections of two major Iraqi cities by al-Qaida affiliates, is a direct consequence of the repression of peaceful dissent by the U.S.-backed government in Baghdad and, ultimately, of the 2003 U.S. invasion and occupation.

At the end of December, Iraqi forces violently attacked a protest camp on the outskirts of Ramadi, killing 17 people. Human Rights Watch noted how the government's raid "seemed intended more to provoke violence than prevent it." Indeed, al-Qaida, despite lack of popular support even within the Sunni heartland, was able to take advantage of public anger at the crackdown to launch its unprecedented assaults on major urban centers in the Anbar province. The Obama administration responded by expediting additional military aid to the Baghdad regime.

This was the fifth major incident during 2013 in which security forces fired upon and killed peaceful protesters. A recent Amnesty International report noted how during the past year thousands of Iraqis were detained without credible charges, hundreds were sentenced to death or long prison terms after unfair trials, and "torture and other ill-treatment of detainees remained rife and were committed with impunity." Even parliamentarians are not immune from imprisonment on dubious charges, and extrajudicial killings have made Iraq the second most deadly country in the world for journalists.

The U.S.-backed Iraqi regime is dominated by sectarian Shia Muslim parties which have discriminated against the Sunni Muslim minority. The combination of government repression and armed insurgency resulted in the deaths of nearly 8,000 civilians last year alone.

Until the 2003 U.S. invasion and occupation, Iraq had maintained a longstanding history of secularism and a strong national identity among its Arab population despite sectarian differences.

Prior to the U.S. conquest, top analysts in the CIA and State Department, as well as large numbers of Middle East experts, warned that an invasion of Iraq could result in violent ethnic and sectarian conflict. Even some of the war's intellectual architects acknowledged as much: In a December 1996 paper, prior to becoming major figures in the Bush foreign policy team, David Wurmser, Richard Perle and Douglas Feith predicted that a post-Saddam Iraq would likely be "ripped apart" by sectarianism and other cleavages but called on the United States to "expedite" such a collapse anyway.

Not only did the U.S. invasion and occupation fail to bring a functional democracy to Iraq, neither U.S. forces nor the successive U.S.-backed Iraqi governments have been able to provide the Iraqi people with basic security. This has led many ordinary citizens to turn to armed sectarian militia for protection.

Much of Iraq's current divisions can be traced to the decision of U.S. occupation authorities immediately following the conquest to abolish the Iraqi army and purge the government bureaucracy -- both bastions of secularism and national identity -- thereby creating a vacuum that was soon filled by sectarian parties and militias. In addition, the U.S. occupation authorities encouraged sectarianism by dividing up an interim government authority based not on technical skills or ideological affiliation but ethnic and religious identity. This has resulted in virtually every political question debated not on its merits, but on which group it potentially benefits or harms. This has led to great instability, with political parties, parliamentary blocs and government ministries breaking down along sectarian lines.

Theologically, there are fewer differences between Sunnis and Shiites than there are between Catholics and Protestants. In small Iraqi towns of mixed populations with only one mosque, Sunnis and Shiites worship together. Intermarriage was not uncommon. Thanks to the U.S. invasion and occupation, however, this harmony has largely unraveled.

Shiites, unlike the Sunnis, have a clear hierarchy. (Ayatollahs, for example, are essentially the equivalent of Catholic cardinals.) As a result, the already-existing, clerical-based social structures in the Shiite community were among the few organizations to survive Saddam Hussein's totalitarian regime and were therefore more capable of organizing themselves politically when U.S. forces overthrew the government in Baghdad in 2003. Sunni and secular groups, then, were at a relative disadvantage when they suddenly found themselves free to organize.

The United States initially insisted on indefinite rule by Iraqis picked directly or indirectly by Washington. However, when hundreds of thousands of Iraqis took to the streets in January 2004 demanding the right to choose their country's leaders, the Bush administration reluctantly agreed to hold direct elections. Having been dominated by Sunnis under the Baathists, the Hashemites, and the Ottomans, the Shiite majority was eager to rule. Not surprisingly, elections have brought Shiite religious parties to power that have since marginalized other groups and imposed their repressive and misogynist version of Islamic law in parts of Iraq where they dominate, particularly in the south of the country.

Sunni opposition to Shiite dominance does not stem from resentment at losing a privileged position in Iraqi political life under the former dictatorship. Indeed, Saddam suppressed his fellow Sunni Arabs along with Sunni Kurds and Shiite Arabs. However, most of Iraq's Sunni Arab minority, regardless of its feelings about Saddam's regime, has long identified with Arab nationalism. Most of the armed resistance that emerged following Saddam's removal by U.S. forces largely came from the Sunni Arab community. The insurgency has also targeted the Shiite-dominated Iraqi government, which came to power as a result of the U.S. invasion and which many see as being puppets of the United States and Iran.

A useful analogy would be the conflict in Northern Ireland, which was not about theological differences between Catholics and Protestants, but about political differences between British loyalists and Irish republicans. Since these political tendencies so closely paralleled religious identities, however, extremists on both sides targeted civilians based on their faith tradition. This is essentially what has transpired in Iraq, only on a much larger scale.

As a result, the tendency in the United States to blame "sectarian conflict" and "long-simmering hatreds" for the violence in Iraq is effectively blaming the victims and avoids acknowledging the U.S. role in the ongoing tragedy.

[Stephen Zunes is a professor of politics and coordinator of Middle Eastern studies at the University of San Francisco.]

A version of this story appeared in the Jan 31-Feb 13, 2014 print issue under the headline: Iraq's upsurge in violence and the US role.