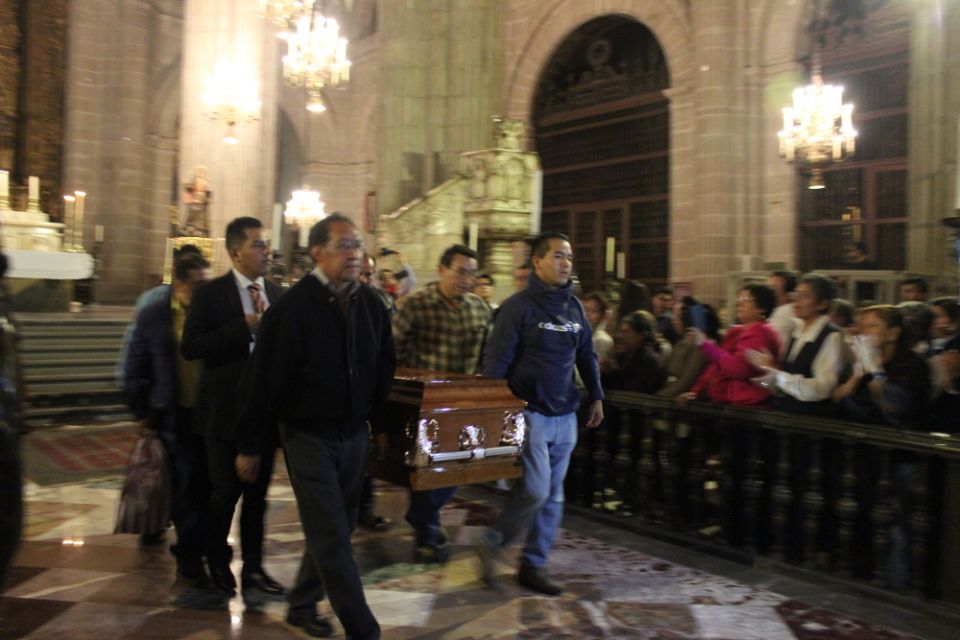 Pallbearers carry the casket of Fr. Miguel Angel Machorro during his Aug. 3 funeral Mass at the Metropolitan Cathedral in Mexico City. Machorro was stabbed at the altar while celebrating Mass May 15. (CNS/Cesar Juarez, Archdiocese of Mexico)

Vatican City — The majority of Catholic Church workers violently killed in 2017 were victims of attempted robberies, the Vatican's Fides agency said, with Nigeria and Mexico topping the list of countries where the most brutal murders were carried out.

The agency said 23 people working for the church worldwide — 13 priests, one religious brother, one religious sister and eight lay persons — died violent deaths in 2017; that number was down from 28 people killed in 2016.

Each year, Fides, the news agency of the Congregation for the Evangelization of Peoples, publishes a list of pastoral workers who died violently. The 2017 list was released Dec. 28.

For the ninth year in a row, the Americas continued to be the continent most affected by violence against Catholic Church workers with 11 people killed there in 2017; with four of those deaths in Mexico, that nation continues to be where the greatest number of priests in Latin America are killed, it said.

"Once again the majority of the pastoral care workers were killed in attempted robbery, and in some cases violently attacked — a sign of the climate of moral decline, economic and cultural poverty, which generates violence and disregard for human life," the agency said in its report.

"Hardly any investigations conducted by the local authorities led to identifying and convicting the perpetrators and the instigators of these killings or the reasons why they were carried out," it added.

Those killed "are only the tip of the iceberg," it said as the report does not include the number of pastoral workers or Catholic faithful who are assaulted, beaten, robbed or threatened, nor does it document properties owned by the Catholic Church that are attacked, vandalized or looted.

The report also spoke of the church's concern for the ongoing kidnappings of priests and nuns, who are most often abducted by extremist groups or by captors seeking ransom. The fates of many kidnapped religious sisters and priests still remain unknown, Fides said.

According to Fides, 424 pastoral care workers, including five bishops, were killed worldwide from 2000 to 2016.