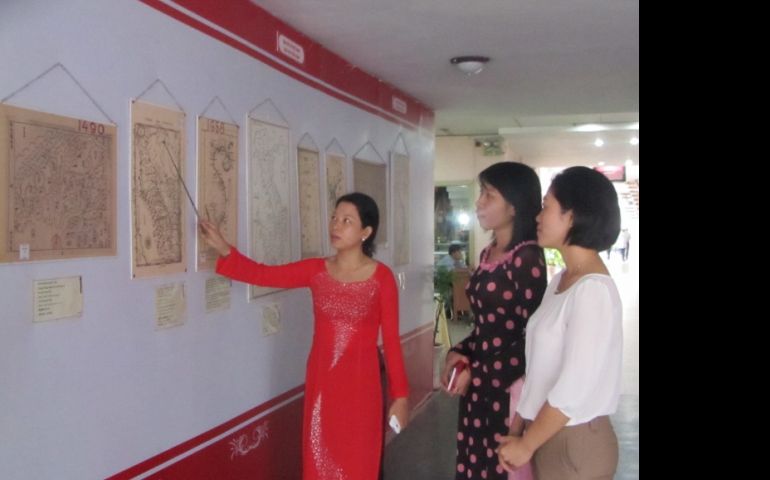 People view island maps June 19 while they were exhibited at the city’s Center for Young People. (Teresa Hoang Yen)

An exhibit of historic maps detailing Vietnam’s maritime sovereignty of waters off the coast of Vietnam, recently disputed by China, has been forcibly canceled by government authorities. The exhibition, planned by the Ho Chi Minh Archdiocese, was supposed to open June 19.

The archdiocese had planned to organize the four-day exhibit at the newly built headquarters building of the Catholic Bishops’ Conference of Vietnam, Thursday through Sunday. Archbishop Paul Bui Van Doc of the archdiocese, also head of the bishops’ conference, was expected to open the event.

Fr. Xuan did not disclose any reason for why the exhibit was canceled, but he expressed wishes local priests, religious and laity would sympathize with the archbishop.

However, informed church sources told NCR on June 18 the Committee for Religious Affairs in Ho Chi Minh City had sent Archbishop Doc a letter saying that it did “not allow the archdiocese to open the exhibit.”

These same sources said church had refused to ask for government permission for the exhibition. The reason cited: “Organizing the exhibit is the internal work of the local church, and the exhibit aims to help local Catholics to master the national sovereignty over the two disputed archipelagos and raise public awareness of patriotism after China illegally deployed its big oil rig last month within Vietnam’s waters.”

Vietnam and China have also taken the territory dispute to the United Nations and have submitted dossiers on their claims to United Nations Secretary General Ban Ki-moon.

Since China moved the rig May 2, boats from both countries have been squaring off in the waters surrounding it. A Vietnamese boat sank after it collided with a Chinese ship in late May.

Vietnamese television reported June 19 that China deployed 116 ships and a helicopter around the rig.

Local sources said they consider it “unusual that Catholics, expressing their patriotism, are requested to ask for government permission.”

They said the banned exhibit shows 90 copies of ancient maps drawn by foreigners and Vietnamese, dating from 1482 to 1989. The copies that were from the 3,000-map collection put together by noted Catholic history researcher, Nguyen Dinh Dau, who has previously been honored by the Hanoi government for his historical research. The exhibit had been displayed at the city’s library June 3 to 8; the maps have also been shown at the city’s Center for Young People.

A senior observer said on condition of anonymity that “the local church obeys the laws and the government, but never seeks government permission for its internal activities.”

“The real reason behind the ban on the church exhibit is that the Communist Party of Vietnam fears to displease its neighboring Communist Party of China,” the observer continued. This conclusion stems from the fact that China’s State Councilor Yang Jiechi met with Vietnamese Foreign Minister Pham Binh Minh, Prime Minister Nguyen Tan Dung and Party Chief Nguyen Phu Trong in Hanoi June 18.

Dung also requested China “withdraw its rig and ships from Vietnam’s waters and join talks for the settlement of disputes and differences between the two countries by peaceful measures according to international law and the common perception of the two countries’ leaders.”

However, this article was not on the newspaper site as of Thursday.

Early this week, Bishop Paul Nguyen Thai Hop, president of the Episcopal Commission for Justice and Peace, two priests and some Catholics were among 50 intellectuals and former government officials who signed a statement to condemn Chinese aggression of Vietnam’s territory and request the Vietnam government take China to international courts for its serious violations of Vietnam’s sovereignty in the South China Sea, and to join hands with the Philippines in the legal battle against China’s unjustified and illegal nine-dashed line.

They also called on Vietnamese people in the country and abroad to sign the statement as way to show their patriotism.

Vietnam church gets involved in national and international issues