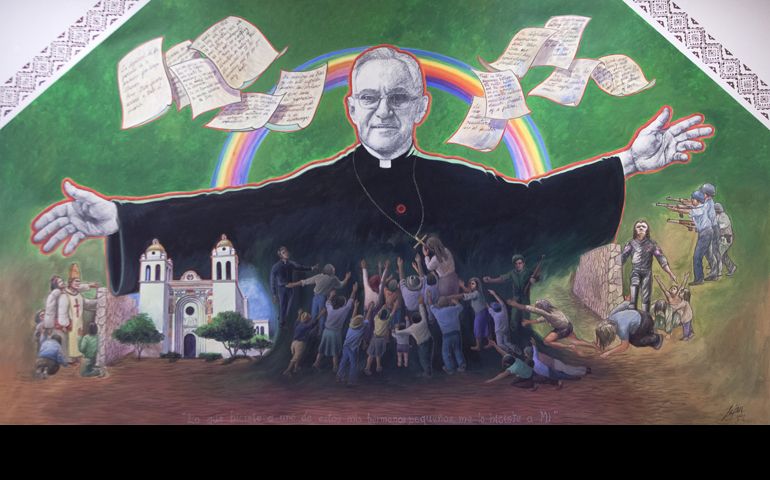 San Salvador, El Salvador — If there's a place in need of salvation at this moment, it's this country named after Jesus Christ. Even as it gets ready to mark one of the biggest events in its history -- the May 23 beatification of slain archbishop Oscar Romero -- El Salvador, which in Spanish means "the savior," is in the midst of one of its most violent periods.

March marked one of the deadliest months in a decade, with 481 people murdered, an average of 16 homicides a day, many committed by violent and ubiquitous gangs, said officials from the National Civil Police.

Almost as an affront, gang leaders in April said they would provide some momentary respite from the violence as a "gift" to the Salvadoran martyr on the occasion of his beatification.

That means little to those like Lourdes Molina, a 40-something mother of three teenage boys who lives each day in desperation and fear that her sons will be hurt or worse by the gangs that terrorize the 6 million who live in El Salvador. The violence is "unbearable," she said. The only thing left to hang onto is the divine intervention of Christ or the intercession of the soon-to-be Blessed Oscar Romero, she said.

Though the beatification brings an air of festivity in a country with little to celebrate, the long-term outlook for the future of young people in the country is dim, she said. No matter how much precaution she takes, violence will one day come knocking as it does for many Salvadorans, she fears.

If there was someone who knew about violence on the denizens of this country, it was Romero. He, too, was a victim. He was fatally shot March 24, 1980, as he celebrated Mass.

Romero was one of the more than 70,000 Salvadorans killed during the country's armed conflict that lasted from 1979 until 1992. He pleaded with soldiers, often quoting the Gospel, to stop killing innocent civilians.

Even after the conflict came to an end, a series of factors -- weapons left over from the war, an influx of gang members, and narcotrafficking -- over time have contributed to the country's present state: a designation as one of the most dangerous countries in the world, and in line to pass neighboring Honduras as the most dangerous place on earth that is not in an official war.

Fr. Oscar Rodriguez, a Salvadoran Franciscan who serves in the Holy Land but who was in El Salvador during the conflict, compares the situation of the nation's rampant violence to a cancer that began long ago and went without intervention.

Had it been treated early, perhaps it would not have spread, he said. But lack of action by previous government administrations have made it difficult to remove this social "cancer," he said.

Scalibrinian Fr. Mauro Verzeletti, preaching on Ascencion Sunday, May 17, at St. Anthony of Padua Parish in Soyapango, outside of San Salvador, invoked Romero in helping the country move forward.

There's nothing left but to follow the Gospel, to fight for truth, transparency, an end to corruption, extortion and killings, all the things that God calls on people to reject, he said. No one knew this better than Romero, who, like Christ, was assassinated, he said.

"Oscar Romero, a martyr, was hated for his faith, as one who loved the poor. He proclaimed the Gospel of our Lord Jesus Christ, and those who proclaim it are hated in this world, persecuted, maligned," which happened to Romero even after he was assassinated, Verzeletti said.

"But we can't be fearful or the devil will creep in," he added. "The devil manifests itself in the form of injustice, impunity and corruption."

He called on Salvadorans to live with fortitude even in the midst of what seems like a hopeless situation.

"Being Christians doesn't mean we'll sit around like Galileans, with our arms crossed looking at the sky," he said. "Being Christian is to act against the reality of this violence, of these killings, of this evil, of all these many things that prevent us from living with dignity in our society."

That is what Romero and Christ called for, he said.

In the face of troubles and worries, Verzeletti continued, "keep that beautiful image in mind this week, of Romero martyred for his love of the poor, for those who work for the kingdom of God, for the persecuted, the maligned, and don't let that demon of injustice and impunity creep in, work for a new world. As Christians we always are seeking new life."